The Trump transition will be televised 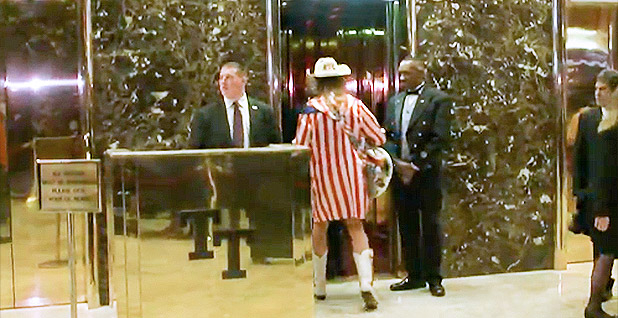 As President-elect Donald Trump builds his government from Trump Tower in New York City, it’s all playing out in the public eye. C-SPAN offers a live feed of the Trump Tower’s lobby — reality TV for political nerds, offering viewers an up-close view of Cabinet hopefuls boarding the elevators and glimpses of tourists seeking selfies with Trump adviser Kellyanne Conway.

The public vetting has been most clear with Trump’s options for secretary of State, but outsiders are also weighing in on prospects for U.S. EPA administrator and Energy secretary.

The "reality show-type selection process that seems to be going on, it’s almost like watching ‘American Idol,’" said Tom Soto, an environmental advocate who worked on the Obama transition team.

Soto said the very public nature of Trump’s vetting process for top officials is just one way this transition is unusual. "I think that there’s contrast between this transition and all previous transitions," he said.

The Naked Cowboy’s presence is another difference. Last week, when North Dakota Sen. Heidi Heitkamp arrived at Trump Tower to meet with Trump, the Democrat was joined in the elevator by the street performer. She later joked on Twitter, "Cowboys are my people — even if they aren’t from ND."

He’s still a prolific user of Twitter, which he says is in part because the press covers him unfairly. "If the press would cover me accurately & honorably, I would have far less reason to ‘tweet.’ Sadly, I don’t know if that will ever happen!" he wrote yesterday on the social media website.

Trump has also been tweeting his praises of contenders for leading administration jobs, and even criticisms of late-night comedy shows. On Saturday night, he wrote, "Just tried watching Saturday Night Live — unwatchable! Totally biased, not funny and the [Alec] Baldwin impersonation just can’t get any worse. Sad."

"These next Cabinet picks are going to be very determinative in determining where he’s going," Snape said. "The rumors don’t look good, but at this point, I have to concede that they’re just rumors."

Asked whether Trump’s approach brought any welcome transparency to the process, Snape said, "Transparency at this point seems like a circus."

The Trump team’s process stands in stark contrast to how such selections played out during past transitions.

When then-President-elect Obama’s team was being assembled in 2008, "the Cabinet picks were discussed very discreetly, and in many instances, even those working within the transition on the policy side or the agency review side did not know who was being considered," said Sally Katzen, a former Clinton White House official who worked on the Obama transition.

Emails stolen from Obama transition chairman John Podesta’s personal account have revealed that he and others worked to keep the names of top job candidates under wraps until the announcements were made official.

"From the point of view of the president and his team, the advantage is that you get an almost plausible early confirmation test," he said yesterday in an interview. "Whether there’s anything in the person’s history or record or they have any strong Senate opponents … they should be able to find that all out."

A likely downside to that strategy, Reilly said, is that "it can’t be the easiest thing in the world to be listed and then suddenly find yourself off the list."

Reilly was invited for a 45-minute closed-door meeting with then President-elect Bush (who was Ronald Reagan’s vice president at the time).

Reilly replied, "I’ll do everything I can to make you a great environmental president." Bush then said his team would try not to let the news leak.

"Most presidents like to be the source of their own surprises and information," Reilly said. "I don’t know if that’s true of President-elect Trump."