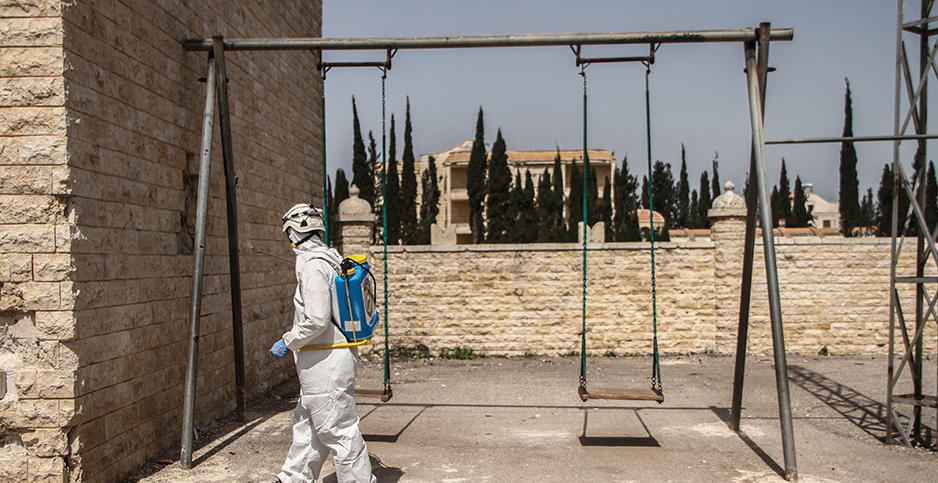 Quarantined Italians sent video messages to their past selves as the death toll from COVID-19 exploded around them last week.

They begged themselves to stay indoors and forgo mundane things that once seemed safe — because in 10 days things would get infinitely worse.

"The worst-case scenario," a woman named Anna told herself. "That’s exactly what will happen."

The novel coronavirus was initially handled like a distant threat. Mitigation measures like quarantines and business shutdowns were delayed for weeks before the disease swept through Italy and other nations. Now, as it begins to rage across the United States, severe responses to stanch its spread are disrupting daily lives worldwide.

There has never been an equivalent reaction to the threat of climate change.

Scientists and medical professionals have insisted that COVID-19 and global warming could both kill millions of people. But some experts in psychology say the risk of climate change is seen by many as too remote to prompt an intense response.

That sleepiness to looming dangers is what Anna and other Italians were warning their past selves against.

Hal Hershfield, a researcher and professor at the UCLA Anderson School of Management, lauded the Italian video campaign because it created a kind of time travel, connecting people with their past and future selves. It depicted an arc; people felt safe from the virus one day and threatened the next.

"Well, we don’t have anyone who can talk to us from the year 2120 and say, ‘You guys, if you don’t do enough, look what’s going to happen’ in the climate space," Hershfield said.

It’s easier to see the dangers of a deadly virus than the disparate threats of rising temperatures.

"Climate change in theory is affecting us right now, but the really, really serious impacts are going to be felt in the distant future," Hershfield said. "We already have a hard time identifying with our own future selves, let alone the future selves of others, too."

Psychological research on the idea of "future selves" explores how humans behave based on their personal connections to older versions of themselves. Studies by Hershfield and others show that people could change their behavior in ways that help themselves later in life if they feel a vivid, positive bond with their future selves.

Hershfield’s research showed that people who viewed virtual aged images of their future selves responded as though they were different people.

But those people were also more likely to make better choices for the future, like saving for retirement, if they felt a stronger connection to their older selves.

"It’s just so hard to say [in the climate] space how any given set of actions right now will affect things right now," Hershfield said. "It’s not all that different from saving for retirement where it’s like, you can save a lot more right now but you’re not gonna see it for a really long time."

Janet Swim has a similar theory.

A psychology professor at the University of Pennsylvania, she says personal response can be governed by whether risks are "felt" or "perceived."

COVID-19 is being felt. Climate risk is mostly perceived.

People can easily attribute certain things to viruses and make personal decisions that stem the spread, Swim said. Climate change has a long causal chain and is a complex problem.

"It’s much more simple to understand," Swim said. "It adds certain potential to that feeling of risk because you could understand it better."

And that familiarity with something like a virus can lead to a "more well-defined behavioral response," she added. This could lead people to feel as if they have more control over the virus.

And because climate change is a complex problem we’ve had for a while, Swim said, there’s been more time to become desensitized to it.

Since people have been hearing about climate change for so long, its "novelty" may have subsided, said Susan Clayton, a psychology professor at the College of Wooster.

New things draw more attention. The coronavirus is one of them. Its death rate is, too.

"There’s also a sense in which people are very attuned to health threats," she said. "And climate change — even though it will impact their health — is not primarily perceived that way at this point."

Swim said effective measures for the virus could have stemmed, in part, from the fact that personal interests are now aligned with collective interests. The COVID-19 crisis has also revealed how people are willing to sacrifice the economy for their health more than the environment.

"It’s perhaps worth remembering for climate change that self-interest and collective interests don’t have to be conflicting," Swim said.

Swim suggested that the world might be overcoming some of the barriers of action now that people have proved themselves capable of massive change, like working from home.

And Hershfield noted that the coronavirus pandemic felt distant to a lot of people just a week ago. It just happens to move much faster than climate change.

Moving forward, the virus response could offer a lesson.

The pandemic has shown how quickly people can adjust course during catastrophic events — even if those changes are life-altering.

"We can make much more drastic changes to our way of life than I think people would have thought possible, and we can do it quickly," Clayton said. "And so now we understand what it means to talk about a really massive societal change."