The wicked wind of the West 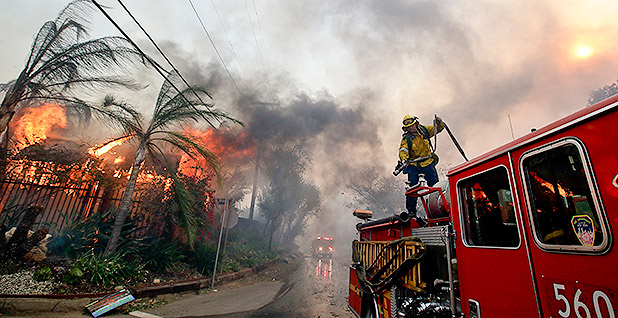 Powerful winds are spreading Southern California fires that have destroyed at least 175 structures and forced more than 27,000 evacuations.

The wind is expected to bedevil firefighters for several more days, with large blazes raging in Ventura, Los Angeles and San Bernardino counties. And while the fires’ causes are under investigation, it’s clear that high winds made the conflagrations so destructive.

Called the Santa Anas, the dry winds typically hit in late fall and are infamous in the Golden State.

"In many cases, it’s all we can do just to try to control the path of the fire, trying to keep it away from people and homes," Berlant said. "Stopping a fire when wind is 50, 60, 70 miles per hour is almost not possible."

He added, "These fires burn into anything that’s in their path. A wind-driven fire is like a freight train, and stopping a freight train on a dime doesn’t happen."

Helicopters can’t drop water or flame retardants in high winds, he said, because the gusts blow the liquids away.

Santa Anas also dry out trees, shrubs and grasses, turning them into tinder and spreading the blaze, he said.

"It’s the winds that spread the embers and fan the fire," Berlant said. "That makes the fire burn fast and jump ahead, as embers fly in the high wind."

Rain hasn’t fallen in Southern California since spring, leaving vegetation as dry as in summer. Then, during the week of Thanksgiving, Los Angeles temperatures hit 95 degrees Fahrenheit. That set the stage to make the Santa Anas even more dangerous, UCLA climate scientist Daniel Swain said.

"It’s sort of the worst of both worlds," Swain said.

That hot air then pushes southwest toward the coast.

The current Santa Anas also came as a result of cold, dense air forming in the region near Joshua Tree. That wind starts at a higher elevation, falls lower, then accelerates as it whips through canyon passes, heading for the coast, Swain said.

"It’s a sort of double whammy wind event that we’re getting," Swain said, with both the Great Basin region and California deserts contributing.

The Northern California version of the Santa Anas is called Diablo, or devil, winds, which are also east-to-west gusts.

Blowing at speeds of up to 79 mph, they pushed fires in October that charred parts of Napa and the surrounding areas. The Tubbs Fire in Napa alone destroyed 5,643 structures.

That group of Northern California blazes is expected to be the most destructive firestorm in state history, with insurance claims at more than $3 billion and growing. State Insurance Commissioner Dave Jones is scheduled to announce undated figures today.

The fire threat is likely to be even greater in the future, according to a study out of UCLA, the University of California, Davis, and UC Irvine that says climate change will make the destruction from all blazes worse.

The researchers examined five decades of fires and found that the Santa Anas were responsible for 80 percent of the cumulative $3.1 billion in economic losses from 1990 to 2009.

"Southern California fires are very, very weather-driven," said Alex Hall, one of the study researchers and a climate expert with UCLA’s Institute of the Environment and Sustainability.

"If you change the weather, you would imagine that fires might change, too, and that’s exactly what we found," Hall said.

The study applied climate modeling to fire patterns and projected that fires in Southern California will become more destructive. Because of drier conditions, by midcentury, the area burned in Santa Ana fires is projected to increase 64 percent. Hotter temperatures will make non-Santa-Ana fires worse, as well. By 2050, the area destroyed by non-Santa-Ana fires is expected to grow 77 percent, the study said.

‘Close to the edge’

That destructive force has made Santa Ana winds part of the Southern California culture.

They haunt books, movies and songs.

Joan Didion famously wrote in "Slouching Towards Bethlehem" that the "violence and the unpredictability of the Santa Ana affect the entire quality of life in Los Angeles, accentuate its impermanence, its unreliability. The wind shows us how close to the edge we are."

T.C. Boyle’s novel "The Tortilla Curtain" makes drought, the Santa Anas and a forest fire central to his story of race, class and labor in Los Angeles in the 1980s and ’90s, said Allison Carruth, an associate professor of English at UCLA.

"The Santa Anas blew in hot from the desert that fall," it says early on. "Only the oleanders thrived. Maybe the wind was the reason my mother did what she did."

Santa Anas star in music, too. The song "Los Angeles Is Burning," by Bad Religion, warns, "When the hills of Los Angeles are burning, palm trees are candles in the murder wind. So many lives are on the breeze, even the stars are ill at ease. And Los Angeles is burning."