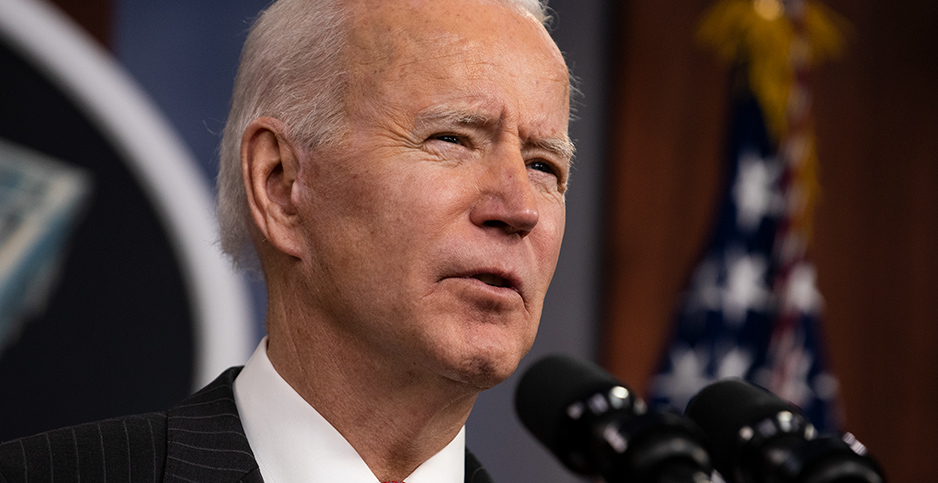 President Biden isn’t talking about Texas, but Republicans are.

As Texans faced their second winter night without electricity yesterday, the political narratives were freezing into place.

Conservatives are using the ongoing disaster to argue against climate policy even as fossil-generated power outages dwarf the amount of renewable energy knocked offline during the historic deep freeze. Republican policymakers like Texas Gov. Greg Abbott and leading commentators on Fox News have cast the episode as a cautionary tale of wind energy’s unreliability.

But Biden offered no message of his own last night during an hour-plus CNN town hall. Nor did the administration connect the situation in Texas to the president’s energy and infrastructure plans. Officials instead emphasized disaster response.

"I think our focus right now is ensuring that the millions of people across Texas who were impacted by the storm get the relief they need," press secretary Jen Psaki said during yesterday’s briefing. She pointed to Biden’s weekend disaster declaration but said policy questions were premature.

"Clearly, as there are investments in the future in energy … across the country, they’ll need to plan for inclement weather," Psaki said. "But I think that’s a discussion and conversation that’s a little bit down the road."

That helped Republicans dominate the narrative around Texas’ biggest disaster since Hurricane Harvey in 2017.

As many as 3 million people have gone without electricity since Monday, when historic snows crippled Texas power plants, squeezed natural gas supplies and froze wind turbines. Authorities reported several deaths related to people trying to keep warm, including carbon monoxide poisonings and a fire that killed three young children and their grandmother.

But the blame was laid elsewhere by many Republicans, including the state’s governor.

"This shows how the Green New Deal would be a deadly deal for the United States of America," Abbott said last night on Sean Hannity’s Fox News show.

"Our wind and our solar got shut down," Abbott said. "And they were collectively more than 10% of our power grid. And that thrust Texas into a situation where it was lacking power in a statewide basis. … It just shows that fossil fuel is necessary for the state of Texas as well as other states — to make sure that we’ll be able to heat our homes in the wintertime and cool our homes in the summertime."

Rick Perry, the former Energy secretary and Texas governor, said his policies to increase Texas wind energy made sense when oil and gas prices were high in the early 2000s, but they weren’t meant to replace "baseload" power.

"If this Green New Deal goes forward the way that the Biden administration appears to want it to, then we’ll have more events like we’ve had in Texas all across the country as we strangle the [energy] diversity we’re going to need," he said.

Tucker Carlson has used his Fox News shows this week to associate Biden’s climate agenda with the Texas blackouts. He pointed to Abbott recently accepting a wind energy award as an indication that Republicans are being seduced by the industry’s money and social prestige.

"So it was all working great until the day it got cold outside. The windmills failed like the silly fashion accessories they are, and people in Texas died — a lot more of them than died at the Capitol on Jan. 6, by the way, just for reference," Carlson said.

"We’re telling you all this not to beat up on the state of Texas … but to give you some sense about what’s going to happen to you, in every state," he said, before playing a clip of Biden speaking about climate change.

Carlson’s monologue was amplified by Rep. Lauren Boebert (R-Colo.), who tweeted it along with a fundraising link. A similar message came from Rep. Dan Crenshaw (R-Texas).

"The reason for blackouts is complex, but in summary: Texas took too many lessons from Cali, over-subsidized renewables, & pushed out baseload energy like natural gas," Crenshaw tweeted.

Along with Biden, progressives have been slower than conservatives in crafting a message out of Texas — but they started reacting yesterday to the conservative arguments.

"People on the left don’t watch conservative media, so entire false narratives in right wing media go unchallenged. The entire right is using the Texas blackouts right now to create a narrative about the failure of green energy. It’s 100% false. It needs to be challenged head on," tweeted Saikat Chakrabarti, the former chief of staff to Rep. Alexandria Ocasio-Cortez (D-N.Y.).

MSNBC’s Chris Hayes pointed to the wind turbines in Iowa and Denmark that work in subfreezing temperatures.

Weak on sweeping next-gen public infrastructure investments, little focus on equity so communities are left behind, climate deniers in leadership so they don’t long prep for disaster.

We need to help people *now.* Long-term we must realize these are the consequences of inaction.

"It is just a lie that wind turbines — green energy — are the root causes of the problems in Texas right now," he said yesterday on his show, arguing that conservatives were trying to turn the policy question of reliable electricity into a cultural issue like abortion or gay rights.

"Republicans and right wing media, they want to take every policy issue and turn it into some painful culture war idiocy," Hayes said, and the biggest obstacle to clean energy "will be these charlatans who will take every opportunity to lie to people for profit and for power."