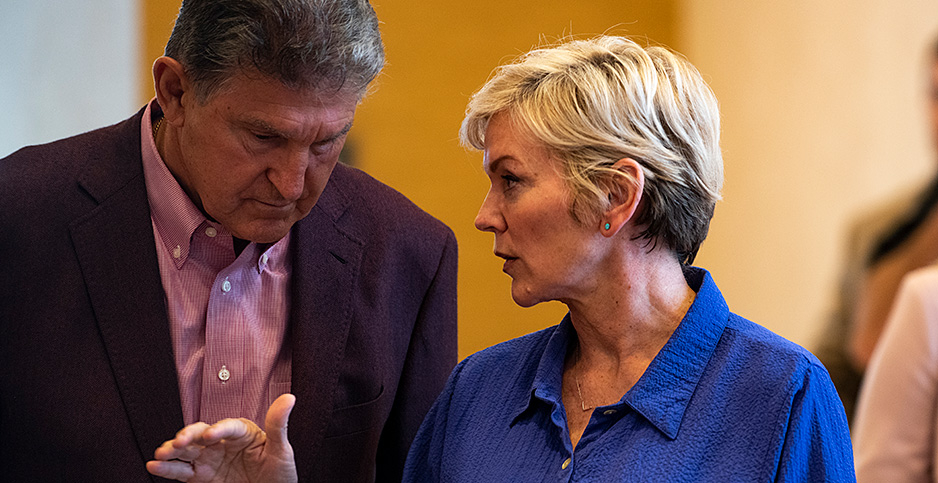 Energy Secretary Jennifer Granholm has been entrusted by President Biden to build support for his sweeping climate and energy package. She is making the case for big infrastructure spending in interviews and public appearances. But it’s her former job that has given her entree to one of Biden’s biggest, and most elusive, targets: Sen. Joe Manchin (D-W.Va.).

Both Manchin and Granholm are part of a "fraternity" of former governors, some say, forged by their time in office during the 2008 financial crisis. That shared bond gives her enhanced standing as she tries to convince Manchin to get on board with a climate strategy that looks to cut greenhouse gas emissions at an ambitious rate.

The relationship was on full display last week as Granholm, Michigan’s former Democratic governor, visited Manchin’s home state at the invitation of the senator. It was her second such visit in an official capacity as a public official. The first was when the two were governors in the 2000s, she said.

Manchin had nothing but kind words. "Her visit to West Virginia was evidence of her willingness to listen, learn and commit to solutions that include West Virginia workers as the economy grows and changes," he said in a statement to E&E News.

Granholm is an important asset for Biden’s efforts to push energy projects over the finish line, said Former Energy Secretary Bill Richardson, who later went on to be the Democratic governor of New Mexico.

"There’s a fraternity of former governors who stick together because we’ve had the toughest job in American government," said Richardson, who chaired the Democratic Governors Association when Manchin and Granholm were in office. "They had a good relationship then, and they’ve both been interested in energy issues as governors."

Richardson, too, noted that they both represented states with economic challenges.

"Their similar experiences as governor can only be helpful to understanding each other," Richardson said. "It’s a smart move on the Biden people to connect them."

That connection is part of a friendship that dates back two decades, and it may prove vital as the two look to navigate increasing calls for climate action from the Biden administration.

Hailing from a state with a long history of fossil fuel production, Manchin, chairman of the Energy and Natural Resources Committee, represents the constituency that Granholm must convince in her effort to refocus climate action as economic stimulus.

And as the swing vote in a 50-50 Senate, where his stances on voting rights and the filibuster have already frustrated the Biden administration, reaching Manchin may prove vital for meaningful climate action to pass the Senate this Congress.

"There were so many analogies in my mind to what happened in Michigan," Granholm said of her visit to West Virginia. "It underscored to me how much Joe Manchin feels the despair of communities that are losing their jobs, and how much he wants to fight for them and fight for a solution for them so that they can see themselves in that future."

Part of the trust each feels can be traced back to Michigan’s woes during the Great Recession, both said separately.

Both were part of a larger coalition of governors pitching the George W. Bush and Obama administrations for more help as their states weathered a cascading crisis.

"Joe was an ally in that, even though West Virginia was not hit as hard as the manufacturing states were because of the financial crisis," Granholm recalled. "But because of going through that together, I know that Joe Manchin understands what it’s like, having seen it happen to other states."

"That experience of having been in battle together, I think that forges strong friendships," Granholm added.

At a July 2007 National Governors Association meeting, they were among the governors who said they would oppose stricter U.S. limits on greenhouse gas emissions until developing countries, such as China and India, were made to meet similar guidelines.

"We can do all we want over here in the United States," Granholm said at the time, "but if there is no lessening of emissions in China, then it does nothing."

And Manchin said the United States could not afford to stop using the coal his state produced, adding that Americans were on pace to double coal consumption by 2030.

"It can’t be one energy pitted against the other," Manchin said at the time. "Whether it’s natural gas or oil or coal or wind or solar or whatever, it’s going to take every bit of this mix to make this country energy independent."

In June 2008, Granholm and Manchin were among 16 Democratic governors who met with then-Democratic presidential candidate Barack Obama — telling him their residents were struggling to make ends meet in the face of rising gasoline and food prices.

Granholm asked Obama for research into battery technology that might help revive her state’s battered auto industry, and Manchin made a pitch for clean-coal technology research.

Granholm has also been a longtime booster of a Manchin priority: renewal of the so-called 48C tax credit, an Obama-era investment tool to boost clean energy manufacturing. Granholm in 2010 joined 18 other governors in a letter to Obama supporting his call to expand the Advanced Energy Manufacturing Tax Credit Program.

Manchin has long pushed to revive the credit as a way to direct spending to coal communities left behind in the broader energy market transition to clean energy.

Along with Sens. Debbie Stabenow (D-Mich.) and Steve Daines (R-Mont.), he introduced legislation that would jump-start the credit with an $8 billion spending ability, half of which would be dedicated to communities located next to where a coal mine or power plant had recently been shuttered.

As part of their visit to West Virginia, the duo renewed their push with calls to reenergize the credit as part of the broader infrastructure negotiations.

Flanked by a poster featuring a quote from former President Kennedy’s famous visit to the state in 1963 — "The sun does not always shine in West Virginia, but the people always do" — the duo hosted a press conference that made the case that West Virginia workers could help fill the supply problem stemming from the increased public demand for clean energy deployment.

The credit was a key energy provision in the White House’s American Jobs Plan, which included calls for an expanded 48C credit as well as multiple hydrogen and carbon capture demonstration projects, all directed at fossil fuel communities.

"Everyone wants to fight for their people," Granholm said. "Right now, it’s the fossil fuel communities that feel particularly vulnerable, which is why it is important and really significant that the Biden administration wants those communities to know that they are not going to be left behind."

While Manchin has offered support for a clean energy workforce, he has pumped the brakes on comprehensive climate policies, like the Biden administration-backed clean energy standard and carbon pricing. He fears that such actions would eliminate resources without addressing global emissions like those from China.

Such rhetoric has become standard for Manchin, frustrating the more climate-focused wing of his party.

Clear where market is heading

Granholm was not willing to guarantee that her friendship with Manchin would yield results in trying to convince him of the utility of clean energy or an infrastructure policy.

"I think I’m just one small voice among many who have bigger footprints," she said.

She did say that Manchin is willing to listen.

Manchin is "very clear-eyed about where the market is heading, so policies that reflect that and reflect the ability to recognize that the movement of the market itself away from coal, for example, or carbon pollution is an opportunity for us to say, ‘Here are the solutions that can create jobs for your people,’" Granholm said. "And I think he will be open to those."

Richardson, the former Energy secretary, noted that Biden’s energy plans will require a "gargantuan public investment" and said Granholm is likely to keep the focus on energy and jobs.

"Maybe energy is the path to get him on board," he said of Manchin.