‘There is no such thing as a hurricane-proof power grid’ 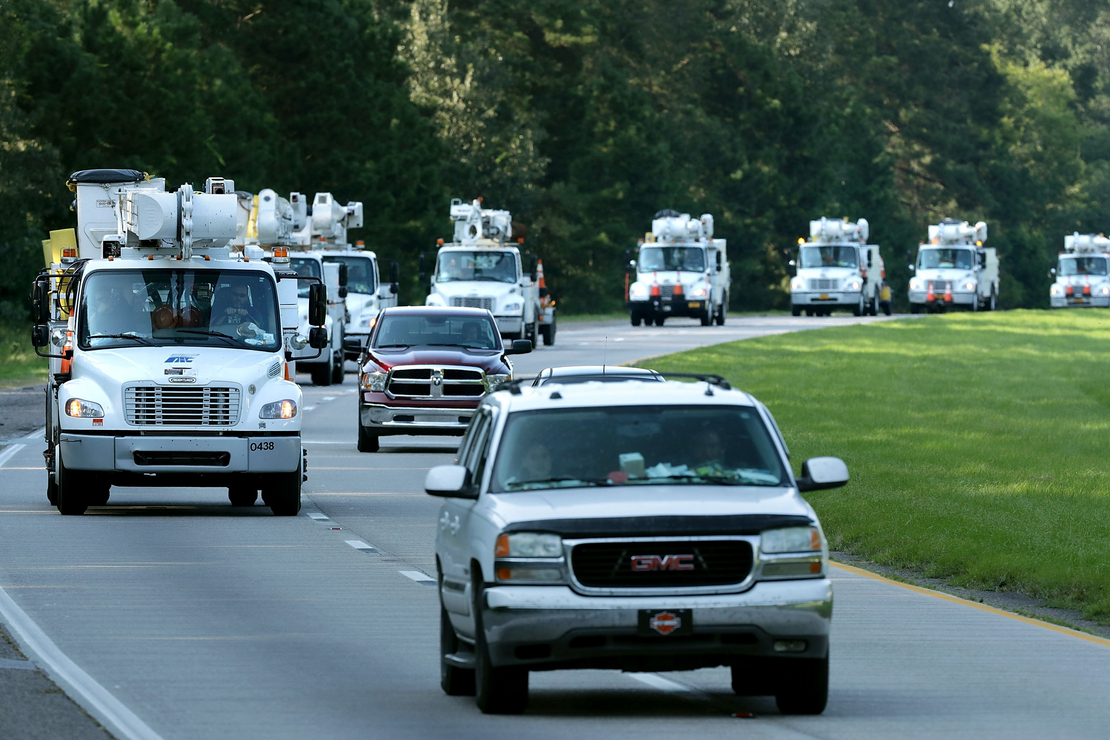 Utility repair trucks headed toward Florida in 2017 as Hurricane Irma approached. This week, Florida is bracing for the arrival of Hurricane Ian. Chip Somodevilla/Getty Images

Electric utilities in Florida were on high alert Tuesday as Hurricane Ian’s winds and massive storm surge began to threaten the state’s west coast, possibly leading to widespread blackouts that officials said could last for days.

Ian was heading Tuesday for an area south of Tampa Bay, according to the National Hurricane Center, and is expected to make landfall in Florida as early as Wednesday afternoon. The hurricane center said Wednesday that Ian has become “an extremely dangerous Category 4 hurricane.”

More than 70,000 homes and businesses in Florida were without power early Wednesday, according to PowerOutage.us. That number is expected to climb rapidly as Ian’s outer bands move onshore.

Ian presents a major test for the U.S. power sector less than two weeks after Hurricane Fiona knocked out power in Puerto Rico. Ian’s strong winds are likely to topple trees, utility poles and wires, but emergency officials, electric company executives, meteorologists and grid experts warned that the storm’s sloth-like speed and storm surge could bring the most trouble.

“I don’t know if we’ve faced that before,” said Ted Kury, director of Energy Studies for the Public Utility Research Center at the University of Florida, referring to the projected peak storm surge of 8 to 12 feet stretching 60 miles along the state’s west coast.

That area is south of Tampa Bay — which hasn’t been hit with a major hurricane since Irma in 2017. But Tampa Bay itself hasn’t seen a storm with winds higher than 111 mph since 1921, according to the National Weather Service.

Because of its track, Ian is on a path to damage the power grids of three major electric companies all at once.

“I’m not sure what we’re to expect,” Kury said in an interview.

Ian is heading toward the territories of Tampa Electric Co., Duke Energy Florida and Florida Power & Light Co. All three power providers — which are considered to be investor-owned utilities — have mobilized people and supplies in various areas to restore electricity when it is safe to do so.

“Hurricane Ian has the potential to cause significant destruction, and we are doing everything we can to prepare for a safe restoration,” said Archie Collins, Tampa Electric’s CEO, in a news release.

More than 30,000 workers from at least 23 states will be in Florida to help restore electricity, according to the Edison Electric Institute, the trade group for the nation’s investor-owned electric companies. EEI is working with the Department of Energy and the Electricity Subsector Coordinating Council (ESCC) on response efforts.

The ESCC is a group of power industry officials that helps to coordinate disaster and cybersecurity threat response efforts with the federal government.

“Prepare for outages that will be for an extended period of time,” said Eric Silagy, chief executive for FPL, at a briefing yesterday.

Silagy cautioned that weather conditions may prevent line crews from doing any power restoration for up to 12 to 20 hours at a time.

“This is going to be a challenge, just rest assured we’re going to be out there as soon as we can,” he said.

In a Tuesday briefing, Florida Gov. Ron DeSantis (R) said Ian’s changing track now puts more of the state at risk for power outages. The storm is expected to directly hit the West Coast and then cut across the state, affecting the service territories of Florida’s major electric companies, he said.

“This thing is the real deal, it is a major, major storm,” the governor said.

Roughly 2.5 million Floridians were in some type of evacuation zone as of Tuesday because of the projected storm surge and flooding, DeSantis said.

“It’s just going to be churning out rain, moving at a snail’s pace,” DeSantis said.

Florida has long been a punching bag for storms, including several catastrophic hurricanes that have hit the state over the years. Its electric companies meet with utility regulators annually to review plans to strengthen the power grid and ease restoration efforts after a major hurricane or tropical storm

The work includes replacing wooden power poles with concrete ones, burying more power lines underground and installing smart grid technology. For Tampa Electric, Ian may be a test of its microgrid pilot program known as BlockEnergy.

BlockEnergy involves a small, planned community with 40 homes, each of which has rooftop solar panels and a backup battery box. The project is inter-tied to the grid.

Silagy of FPL, the state’s largest electric company, said it is “indisputable” that the billions of dollars the company has spent on grid hardening since back-to-back hurricanes in 2004 and 2005 has paid off “significantly.”

The electric company’s grid resilience work shaved days off power restoration after Hurricane Irma in 2017 and makes a difference daily in preventing random outages, the CEO said during a Tuesday news conference at FPL’s storm center in Palm Beach County.

FPL operates nuclear reactors in Miami-Dade and St. Lucie counties but did not plan to shut them down as of Tuesday, Silagy said. The company would shut the plants if hurricane-force winds are expected to hit the reactors, he said.

Ian’s tropical storm-force winds were expected to threaten parts of South Florida on the eastern side of the state after the storm’s path moved slightly to the south.

Silagy warned that having saturated ground combined with forecasts that Ian will slow to a crawl and dump rain on the state for days could impede power restoration. Parts of the grid also may have to be rebuilt after the storm, he said.

“There is no such thing as a hurricane-proof power grid,” he said.

Biden spoke with DeSantis on Tuesday evening to discuss the steps the federal government is taking to help Florida prepare for Ian, Jean-Pierre said on Twitter. The president and the governor committed to continued close coordination, she said.

“The preparation for this storm has been extensive,” Criswell said, calling it a coordinated effort between FEMA and federal, state and nonprofit organizations.

Included in that preparation is setting up a search-and-rescue coordination group and pre-staging 128,000 gallons of fuel for “immediate” deployment and moving a “variety of generators of all sizes and types to help restore power to critical infrastructure after the storm passes,” Criswell said in her remarks in the White House briefing room.

“I don’t have any concerns at this point that we’re going to have the ability to handle the fuel needs that we’re going to need in Florida,” Criswell said, when asked about low levels of the Strategic Petroleum Reserve. The SPR has been tapped this year to help combat high energy prices in the wake of Russia’s war in Ukraine.

Ian is expected to move into Georgia and South Carolina by the end of the week and into North Carolina by the weekend. Georgia Gov. Brian Kemp (R) issued a state of emergency for all counties in his state starting 7 a.m. Thursday.