‘There was no call’: Inside Pruitt’s mining group meeting 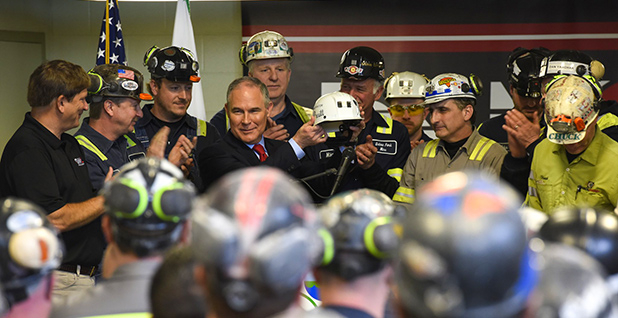 Former EPA Administrator Scott Pruitt is seen here at the Harvey coal mine in Pennsylvania in April 2017. @ScottPruittOK/Twitter

The EPA Office of Inspector General’s Office of Investigations conducted a dozen interviews with agency officials and members of the National Mining Association to uncover who said what in an April 2017 meeting with Pruitt. The fact-finding inquiry, outlined in records obtained by E&E News under the Freedom of Information Act, was requested to establish whether the former administrator had pressured NMA to push for the United States to withdraw from the climate change accord.

If Pruitt had been found to have done so, it could have been a violation of anti-lobbying provisions in appropriations law. Instead, the OIG’s agents found conflicting accounts of what the ex-EPA chief said in the meeting, according to the documents, which were pockmarked with redactions.

While some of those interviewed said Pruitt did discuss the Paris deal and his position in opposing it, others said he never mentioned the agreement. Further, everyone interviewed either denied or did not remember Pruitt asking NMA members to support withdrawal from the climate pact.

One person told OIG agents that Paris was "briefly discussed" in a private meeting between Pruitt and NMA members after his speech to the group.

"’There was no call’ from Administrator Pruitt to the miners to pressure the president into withdrawing from the Paris Agreement on Climate Change," the person said, adding that Pruitt’s position on the deal was that "withdrawing is a good thing."

But the same person said neither Pruitt nor anyone on EPA staff asked for public support for leaving the agreement.

Others interviewed didn’t even remember the former administrator mentioning the climate pact.

"Regarding [redacted] recollection of whether former Administrator Pruitt discussed the Paris Climate Accord, NMA04 said ‘I don’t think he did,’" said one interviewee. That person added that Pruitt was focused on "the EPA’s priorities and regulations, such as rolling back some of the EPA laws."

Another interviewee said they "did not hear the Administrator mention anything related to his support for the U.S. to withdraw from the Paris Agreement on Climate Change."

Like others, that person was asked whether Pruitt urged those with NMA to push for backing out of Paris.

"Did you hear Mr. Pruitt ask any of the National Miners Association [sic] members to pressure the President into withdrawing from the Paris Climate Change Agreement?"

One interview was mistakenly excluded from the records released under FOIA last week. The OIG yesterday released the missing interview.

In that interview, the person said they also didn’t remember Pruitt mentioning the Paris accord and denied the former administrator suggested to the mining group to support withdrawal from the climate pact.

Some of those interviewed by OIG agents said Pruitt had no influence on NMA’s position on Paris.

One interviewee "stated the meeting with former Administrator Pruitt had no impact on [redacted] personal or organizational decision to send a letter to President Trump expressing support of the U.S. withdrawal from the Paris Climate Accord."

Another person interviewed suggested NMA was already considering supporting withdrawal from the climate pact before the group’s meeting with Pruitt.

"Arrangements to convene a meeting to vote on whether or not to support the U.S. withdrawal from the Paris climate accord were made before [redacted] met with former Administrator Pruitt," said the report.

"Therefore, said meeting or the decisions made by [redacted] in said meeting were not influenced by former Administrator Pruitt’s meeting" with the mining trade group.

After meeting with Pruitt, NMA took a more forceful position on the agreement. The group soon sent a letter to the president saying the Paris accord was harmful to miners (Climatewire, April 28, 2017).

At the time, top officials in the Trump administration were divided on Paris, with some arguing to stay in the agreement while others advocated to withdraw. Pruitt was with the latter side as one of the climate pact’s most vocal opponents.

Pruitt’s campaign against the Paris accord earned him national attention. After Trump announced his decision to leave the deal during a White House Rose Garden speech, the then-EPA administrator gave remarks and praised the decision to withdraw.

A spokesman with the mining trade group said Pruitt never asked NMA to take a position on the Paris deal.

"In attending the meeting, the Administrator never requested any action from NMA or its membership with regard to Paris; reporting at the time that suggested otherwise was and is entirely false. His remarks delivered to membership were consistent with his public comments at the time, and went no further," said NMA spokesman Conor Bernstein.

Pruitt’s official calendar shows on April 24, 2017, that he was scheduled for a speaking engagement at the NMA board of directors meeting at the Ritz-Carlton Golf Resort in Naples, Fla., followed by a subsequent meeting with the NMA executive committee.

For its inquiry, the OIG conducted seven interviews with NMA members and five interviews with EPA staffers. The interviews first began in April 2018, about a year after the meeting took place, and were completed by October.

OIG agents showed their law enforcement credentials before some of the interviews started, according to records. NMA members were interviewed over the telephone, and attorneys with the mining group were often present for those interviews.

Acting EPA IG Charles Sheehan said in a letter to Rep. Frank Pallone (D-N.J.), chairman of the House Energy and Commerce Committee, included with the records, that before agreeing to interviews with investigators, NMA members requested confidentiality. Consequently, their personal information was removed from written accounts of their interviews.

In addition, Sheehan said in his letter to Pallone that the watchdog office agreed to compile "a factual record" of Pruitt’s April 2017 meeting with NMA. "In turn, you may provide the OIG record to the [Government Accountability Office]," Sheehan said.

"This was a fact-finding matter," the OIG’s closing report concluded, saying records had been provided to Congress. "No further action is required. As such, this matter is being closed."

Pruitt is no longer at the agency. He resigned from EPA last July as he battled against allegations he had misused his public office.

The OIG previously disclosed in its latest semiannual report released in May that it had ended the inquiry. E&E News was directed to file a FOIA request for its results, resulting in the release of the records (Greenwire, May 30).

Pallone had requested the inquiry in a letter to the IG, asking EPA’s internal watchdog to "develop a comprehensive factual record" of where Pruitt may have violated anti-lobbying provisions in his push to have the United States withdraw from the Paris accord, including his April 2017 meeting with NMA.

A committee spokeswoman said Pallone had passed the OIG’s record of the meeting on to GAO and recommended that E&E News contact it for what it planned to do next. Pallone had also asked GAO to look into the matter.