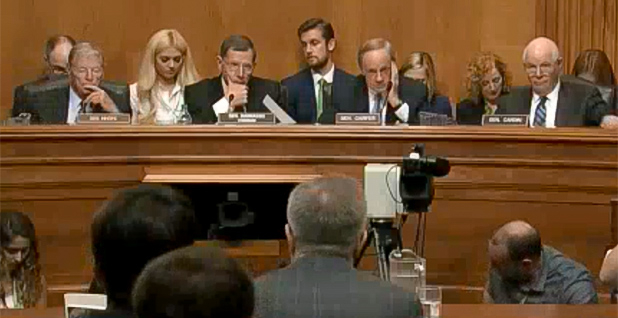 Andrew Wheeler yesterday earned a key endorsement to become permanent head of EPA, but members of the Senate Environment and Public Works Committee signaled they’re in no hurry to see the panel’s former top staffer receive a promotion.

The gathering was less contentious than Pruitt’s appearances before the panel, with Wheeler joking with senators from both parties and offering assurances to members over parochial policy concerns and addressing questions about his own past lobbying (Greenwire, Aug. 1).

Sen. Tom Carper (D-Del.), the EPW Committee’s ranking member, said he was pleased with changes Wheeler has implemented in his brief tenure but sidestepped a question about whether he could support the acting chief’s elevation to the top job.

While several Republican members of the panel signaled they too could support Wheeler should Trump nominate him to be administrator, they indicated they’d prefer he continue in an acting capacity for at least several months.

"I would be very comfortable with him being the administrator," Sen. Shelley Moore Capito (R-W.Va.) said in an interview. "I just think we need to let the dust settle here. I think he’s done a really nice job in terms of being open and willing to listen."

Waiting would show Democrats that Wheeler’s efforts at "governance and transparency are sincere," she said, possibly earning bipartisan support should Trump eventually tap him for administrator. "That would be good."

Even Wheeler’s former boss, Sen. Jim Inhofe, said it would be best for the president to wait to nominate Wheeler to be administrator, a move that the Oklahoma Republican said he supports.

Inhofe noted Wheeler is "still in this 200-day period," a reference to the 210 days federal officials are allowed to serve in an acting capacity under a 1998 law.

"I would think the determining factor there would be when it’s going to be easier to do it, when there’s going to be the least hostility," Inhofe told reporters after the hearing. "There’s no sense in rushing into something you don’t have to rush in."

Inhofe said he was confident that Wheeler would eventually assuage Democrats’ concerns about the direction of the agency.

"Time is on his side," he said. "Because the more time that Andrew Wheeler is performing, the more faith people are going to have in him. His sense of fairness is going to be contagious to a lot of people."

"The president decides that," he said as he walked into the Senate chamber to vote.

Sen. Lisa Murkowski (R-Alaska), who chairs the Appropriations subcommittee that funds EPA, signaled she could live with Wheeler leading EPA in an acting capacity for now.

"I think we all want to have someone permanently," she said before adding, "I’m OK with where we are."

However, Inhofe also said he thought Wheeler could win confirmation with the support of moderate Democrats up for re-election if he was nominated and received a vote in the near future.

"There’s an awful lot of Democrats out there … who would have a very difficult time opposing him," he said.

But farm-state Republicans who have been up in arms over Pruitt’s waivers for small refiners from the renewable fuel standard suggested that Wheeler would have a tough time even clearing the EPW Committee at this point.

"We’ve got a lot of work to do" on the RFS, Sen. Joni Ernst (R-Iowa) told E&E News after peppering Wheeler with questions on the matter.

She declined to endorse Barrasso’s call for Wheeler to be promoted. "I am reserving judgment right now," she said. "We’ll see if we can sit down and have some more discussions."

Sen. Mike Rounds (R-S.D.) said he was unsatisfied with Wheeler’s response to his questions on ethanol.

Another RFS backer, Sen. Deb Fischer (R-Neb.), declined to address Barrasso’s suggested promotion, saying she planned to submit a number of detailed questions for the record for Wheeler to answer on the subject.

"I just want to see his answers," she said.

But Inhofe downplayed the possibility of his fellow Republicans torpedoing a possible Wheeler nomination over the RFS, which he said is not a partisan issue.

Illinois Democratic Sen. Tammy Duckworth also said she was keeping an eye on Wheeler’s actions related to the RFS. "We need to make sure he remembers our commitment to our farmers," she said.

A key question for committee Democrats is how much autonomy Wheeler will flex when it comes to running the agency and implementing environmental policy.

"I ask the same question of most of the nominees," Duckworth said yesterday. "Are you willing to serve the country before all else?

"You know at some point with this administration, you may end up in a place where you have to choose between being fired or doing your job," she said. "Are you willing to be fired from the job to do what’s right?"

Still, committee Democrats were less confrontational in their handling of Wheeler than with Pruitt, praising some of the steps he’s taken since taking the reins of EPA.

Sen. Ben Cardin (D-Md.) lauded Wheeler for "direct, clear and unambiguous" answers to his questions. Those include whether the acting administrator would be an "advocate" within the administration to ensure EPA receives sufficient funding to carry out its mission and whether he would include career staff in science and policy discussions.

"I liked his answers," the Maryland Democrat said on his way to vote before the hearing ended. "We’ll see whether he’s strong enough to stand up to the pressures he will see within the Trump administration on these issues." But Cardin said he would "wait to see" whether Wheeler’s approach really signals a new era at EPA.

Wheeler encountered a grilling from one Democrat on the panel, Sen. Ed Markey of Massachusetts, who raised his voice as he pressed him on the effects of rolling back the Obama-era fuel economy standards (E&E News PM, Aug. 1).

EPW Committee member Dan Sullivan (R-Alaska) touted Wheeler’s work on the committee as a selling point that could win over some Democrats.

Wheeler "does have experience working with Democrats, working with Republicans both in his previous positions at EPA, but really importantly on the EPW Committee," he told reporters. "That committee is actually quite bipartisan … if you look at some of the big bills we passed: [chemicals], the highway bill, [water projects], it’s all been very bipartisan."

Sullivan pointed to Wheeler’s "pretty respectful" confirmation hearing to be deputy administrator and said he had talked to panel Democrats who were "tempted" to support him, although none ultimately did.

But Democrats also signaled that yesterday’s cautious praise doesn’t mean they’ll line up behind Wheeler if he’s nominated to be administrator.

Cardin said he wouldn’t "prejudge" the nomination process if Wheeler is tapped.

"Clearly he doesn’t have a lot of the challenges that Mr. Pruitt had, but we are interested in the substance," Cardin said. "What does he stand for as far as the regulatory environment? Will he carry out the law? Will he just be strong enough against an administration that’s been very challenging to the environment?"

Sen. Chris Van Hollen (D-Md.) echoed the point, saying that although he was pleased with Wheeler’s pledges to continue EPA’s efforts to restore the Chesapeake Bay, "there’s obviously lots of issues to cover."