These disaster projects could lose cash to Trump’s wall 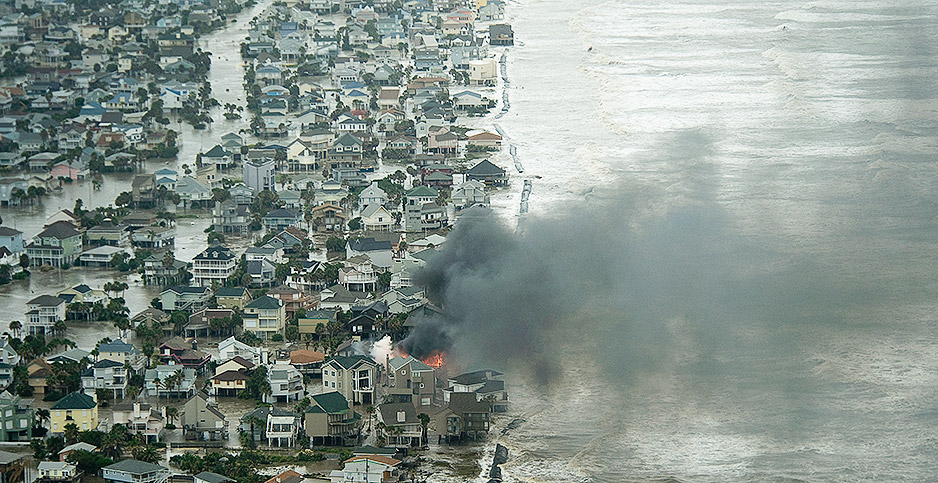 A house was engulfed in flames as crashing waves from Hurricane Ike inundated homes on Galveston Island, Texas, in 2008. Smiley N. Pool/Rapport Press/Newscom

Many of them live near the American River, one of the country’s most flood-prone urban watersheds.

Houston residents could shoulder the cost, too, along with Texans along the Gulf of Mexico, where the Army Corps of Engineers is working on 10 disaster projects funded by Congress in the aftermath of Hurricane Harvey.

Florida might have to put beach nourishment projects on hold. And upgrades to the 60-year-old dike ringing Lake Okeechobee, which many consider to pose the state’s greatest flood risk, could have to wait.

Puerto Rico, still in tatters after Hurricane Maria, could lose funding for a critical flood project in the heart of San Juan, where rapid runoff from the Rio Puerto Nuevo Basin threatens 6,500 people and homes and infrastructure valued at $3 billion.

These are among the 57 construction projects totaling $13.9 billion that the Army Corps prioritized last year. The White House appears to have identified that funding as a potential source of cash for building a border wall if Trump declares a national emergency to circumvent Congress’ spending authority.

The $13.9 billion, allocated under the Bipartisan Budget Act of 2018 (P.L. 115-123), is intended to help victims of Hurricanes Harvey, Irma and Maria and other natural disasters dating back to 2014.

Now that disaster aid could be seen as a potential funding stream for Trump’s proposed $5.7 billion wall.

The outlines of the White House’s reallocation plan became clear last week, when several media outlets revealed that the administration had been pressing the Army Corps to identify unspent funds that could be used for the wall.

Corps officials did not respond to questions from E&E News. The disaster projects range from big-ticket items in California, Texas, Florida and Puerto Rico to more modest flood control measures in Iowa, Kentucky and West Virginia.

The administration did not confirm or deny that it was eyeing the $13.9 billion list of projects to fund the wall. The list matches criteria revealed by sources with details of the reallocation proposal, including the amount, origin and purpose of the funds. Other experts who reviewed the Army Corps’ list of "long-term disaster recovery investment" projects said they were likely the ones being eyed by the White House.

That evoked dismay among environmentalists, disaster recovery experts and some lawmakers.

"We’re talking about drawing down resources that have already been committed by Congress and the president to help communities that have been devastated by disasters over the past few years," said Laura Lightbody, project director for the flood-prepared communities initiative at the Pew Charitable Trusts. "The idea that these dollars can simply be repurposed [for a border wall] is bad precedent, and it puts these communities on edge."

Another official with a national environmental group, who spoke on background, questioned whether the Army Corps projects are environmentally or economically sound. Nevertheless, the official said, "the precedent of swiping federal disaster dollars from areas with real needs for an ill-conceived pet project is shameful."

The administration’s idea of repurposing Army Corps disaster funds was floated last week when the president visited the border city of McAllen, Texas, to rally public support for the wall.

Trump has raised the specter of a national emergency to prod reluctant Republicans and entrenched Democrats in Congress to accept his demand for wall funding. Democrats say building a wall is ineffective and immoral. The result is the longest partial government shutdown in U.S. history, now in its 24th day.

By Friday afternoon, Trump was walking back some of the threats, saying his preference was not for a national emergency declaration. "I’m not going to do it so fast," he said at a meeting with law enforcement officials at the White House.

That did little to assuage state and territorial officials who feared losing vital disaster recovery funds if the administration proceeds with a reallocation of Army Corps resources. Puerto Rico Gov. Ricardo Rosselló used the president’s favorite social media platform to push back against the idea early Friday.

"No wall should be funded on the pain and suffering of U.S. citizens who have endured tragedy and loss through a natural disaster," Rosselló posted on Twitter. "This includes those citizens that live in [California], [Texas], [Puerto Rico], [Virgin Islands] and other jurisdictions. Today it’s us, tomorrow it could be you."

Even the president’s congressional allies and travel companions to the border, Texas Sens. John Cornyn and Ted Cruz, both Republicans, expressed doubts about the reallocation strategy, citing the state’s ongoing recovery after Hurricane Harvey in 2017.

"In a normal world, not the alternate universe we’re living in now, you would have the two sides get together and work out a negotiated solution," Cornyn told reporters at a gathering hosted by the Texas Public Policy Foundation in Austin. "But I will tell you that I will oppose any reprogramming of Harvey disaster funds. We worked very hard to make sure that the victims of Hurricane Harvey — their concerns are addressed and Texas is able to rebuild. And I think we are together on that."

Cruz, speaking to reporters at the same event, said he believed concerns about a reallocation of disaster funds were overblown. "I don’t think we’re going to see that money jeopardized in any way," he said, according to The Texas Tribune.

California Rep. John Garamendi (D), a member of the Transportation and Infrastructure Committee, said to the Los Angeles Times he was told of California projects totaling $2.46 billion that were being targeted under a reallocation scheme.

They include flood control projects on the American River near Sacramento, as well as ongoing projects to raise dams at Folsom Lake, an impoundment on the American River, and at Isabella Lake in Kern County. Those projects and three others Garamendi mentioned appeared on the project list reviewed by E&E News.

Appearing on CNN on Friday evening, Garamendi said the president would "pay a heavy price" if he declares a national emergency. He was also working to introduce legislation that would prohibit the administration from reallocating funds from Army Corps disaster recovery projects to border wall construction.

In Florida, the newly inaugurated Republican Gov. Ron DeSantis, a Trump ally, raised a cautionary flag over the reallocation idea. "We have people counting on that [money]," he told the Tampa Bay Times. "If they backfill it immediately after the government opens, that’s fine, but I don’t want that to be where that money is not available."

According to the Army Corps’ project list, Florida received 15 line-itemed disaster allocations under the 2018 Bipartisan Budget Act, including $514 million to fortify the 143-mile-long Herbert Hoover Dike ringing Lake Okeechobee. The dike has been identified as one of the most at-risk structures in Florida due to its age and history of seepage problems. Work to reinforce the dike began in 2000, but some fear it could rupture or be overtopped if the lake experiences hurricane-force winds and waves.

Ed Thomas, president of the Natural Hazard Mitigation Association and a former senior Federal Emergency Management Agency official, said in an interview that the Trump administration should carefully consider the implications of diverting funds from disaster recovery and flood control projects.

But he also stressed that the raging debate over the border wall, including how to pay for it, could yield important conversations about federal spending on infrastructure and disaster recovery.

"Is this potentially going to have a negative impact on local communities? Yes. And certainly the idea of using disaster dollars to fund a border wall is going to stir up a lot of people," Thomas said.

"But I will also say the nation is in crisis with respect to aging infrastructure — levees, roads, bridges and dams. If a reallocation of $5.7 billion in disaster funds gets people talking about that problem, I can see something constructive coming from it."