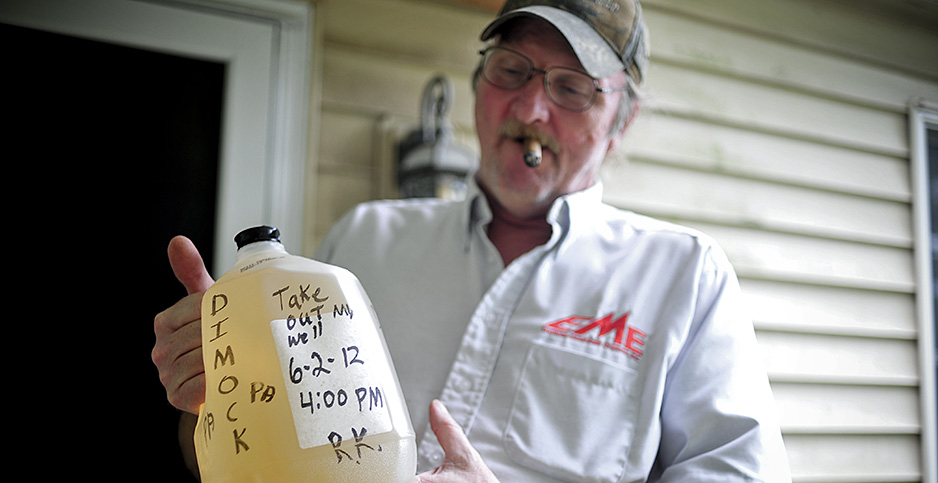 Ray Kemble holds a jug of contaminated water from his drinking well in 2012. The Pennsylvania resident and registered Republican blames hydraulic fracturing for his health problems. Charles Mostoller/ZUMA Press/Newscom

First in a series. Part two can be found here, and part three here.

DIMOCK, Pa. — Ray Kemble is pretty sure the cancer will kill him first, but just in case someone else tries to, his lawyer installed security cameras around his home.

A former truck driver for the fracking industry, with a long white beard and a pin on his motorcycle jacket from President Reagan, Kemble has been making trouble for oil companies since before he got sick.

He found two bullet holes beneath his window after he pushed Pennsylvania to impose a local hydraulic fracturing moratorium here — an escalation, Kemble thinks, from when his car windows got shot out.

In the battle over fracking, Kemble is on the frontlines. Susquehanna County, perched in the northeast corner of the state and in the midst of gas fields, voted overwhelmingly for President Trump in 2016. Its population is about 40,000 people and shrinking.

But ask Kemble what he’s fighting for, and instead of calling for more regulations or an outright ban — the loudest demands of fracking opponents — he gives a simpler answer: enforcement.

"What would help is if they did their [expletive] job," he said of state and federal officials who oversee industry.

As Trump and Democratic nominee Joe Biden trade blows over fracking, many of its opponents in Pennsylvania say the national campaign bears little resemblance to their experience on the ground.

Yes, they want fracking to end. Most would welcome new restrictions. But Pennsylvania activists say the state already has some strong safeguards — including an environmental rights amendment in the state constitution — that have been rendered toothless by weak oversight.

By the same turn, they say industry is vulnerable to aggressive prosecutions, lawsuits and permitting enforcement. But they’re not being pursued, they say, giving industry an informal subsidy.

"Fracking is an industry that dies under close inspection," said Mark Dixon, a Pennsylvania activist and filmmaker.

A test of that theory started this summer.

That accusation was soon accompanied by something else: a statewide grand jury report detailing Pennsylvania regulators’ shortfalls.

"We believe that some [Department of Environmental Protection] employees saw the job more as serving the industry than the public," the grand jury wrote.

"We heard too many stories of complaints unanswered, or cavalierly dismissed. Some employees refused to consider evidence of problems presented by citizens, while at the same time readily accepting and believing information supplied by operators," it said.

Those developments are already adding pressure to the industry.

Earlier this month, the Delaware County Employees’ Retirement System in Pennsylvania filed a class-action lawsuit accusing Cabot of "conceal[ing] the truth about the Company’s internal environmental controls and procedures as well as exposure to legal liability," allowing top executives to sell $1.8 million in stocks at inflated prices, according to the suit.

Cabot has denied wrongdoing. And state regulators said oversight deficiencies stemmed from the Republican administration that left office in 2015.

Opponents of fracking are eager to use these developments to build political momentum ahead of the election. But they’re finding it difficult to break through the presidential campaign’s narrative.

Biden has proposed ending fracking on public lands. But as Trump accuses Democrats of seeking a blanket ban, Biden is downplaying his proposed restrictions. Instead, the former vice president has been emphasizing that he would allow fracking on private land to continue.

That impulse was on display during last week’s ABC News town hall, when a Republican asked Biden how he would transition the state away from an industry that has made "the population sick and killed wildlife in southwest Pennsylvania."

Biden replied: "Well first of all, I make it clear, I do not propose banning fracking."

He continued by briefly calling for managing it "very, very well" before he pivoted to his plan for renewable energy.

Biden’s approach has frustrated progressives who want him to use his bully pulpit to amplify the industry’s faults. They point to polling that shows Pennsylvanians are split on whether fracking helps the state.

"This new survey adds to what we already know about public opinion in Pennsylvania: Contrary to what the pundits and Donald Trump would have you believe, fracking is not popular with voters," Food And Water Action Policy Director Mitch Jones said, adding that a fracking ban should be an "essential" part of U.S. climate action.

Fracking opponents in Pennsylvania say they share that urgency, even if they differ on the path forward. U.S. policy on extracting and burning natural gas will heavily influence future emissions.

And in the short term, Pennsylvanians are also worried about their health.

Kemble, the former fracking truck driver, has had seven surgeries in the last two years to remove tumors from across his body.

Kemble’s a heavy smoker. He keeps two pipes on hand, puffing through one bowl of cherry tobacco after another. But the nature of his cancer leads him to blame the fracking fluids he used to transport.

He said he tended to rest his left arm on the truck while he dispensed fluid, which inadvertently sprayed "a number of times on my right side."

Pointing to the right side of his head, where doctors removed a brain tumor, he said: "Gee, wonder why they had to go through this ear."

His left arm was also tumorous, along with his prostate and heart.

As much as he wants fracking gone, though, Kemble thinks Biden is wise to avoid calling for a ban — especially since that power rests with states, not the president.

"We’re playing politics with the words," he said. He doesn’t want Biden risking votes to support something that’s out of his hands.

That adds urgency to the clean energy transition, said Ketyer, who now advocates on environmental health issues. But it also raises the stakes for moonshot proposals like an outright fracking ban.

"I feel pretty strongly that it’s a waste of time even talking about a frack ban," he said. "We don’t have time to debate it. We don’t have time for it to get through legislatures, whether it’s Harrisburg or it’s in Washington, D.C."

Some activists worried that the state is still too far from being able to transition workers and communities out of fracking.

"If you do a ban on fracking, it’s still a sizable part of the economy. … We are not ready. We are not equipped for that transition [yet]," said Anthony Giancatarino of the Philadelphia-based Just Community Energy Transition Project.

He said progressives are rightly skeptical of Biden’s call for consensus with Republicans, but the left and center can find common ground on fostering a fair transition.

Biden’s climate plan calls for $2 trillion in clean energy and infrastructure spending. He could still do more, and progressives plan to pressure him from the left if he wins, Giancatarino said.

But that’s also a lot of money on the table to create an off-ramp for fossil fuels.

"We shouldn’t have fracking. But I’m also realistic; it’s not going to happen overnight, and if it does, it’s going to create some harm that we need to prepare for," Giancatarino said.

"This is trillions of dollars for all the things we care about," he said. "How do we make sure we do it right?"