They did research for decades. Then COVID-19 hit 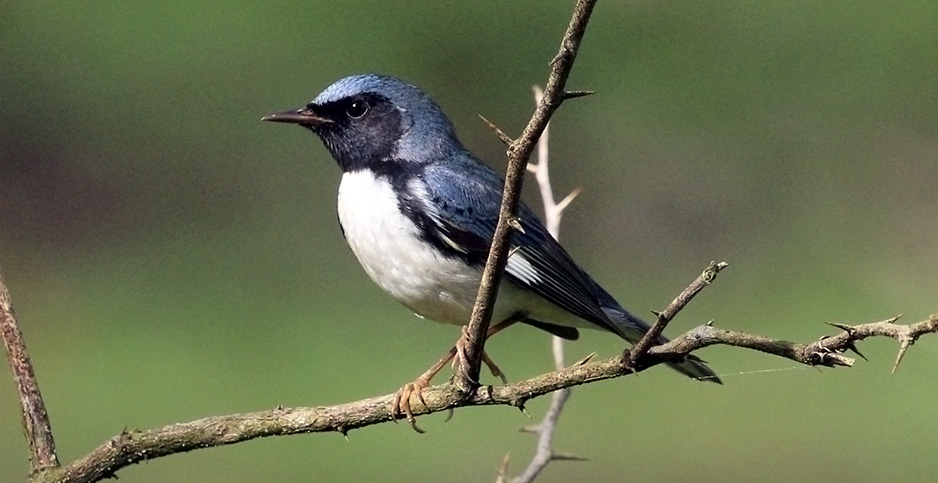 Scientists are concerned that the pandemic could threaten data collected on a wide variety of subjects, including the black-throated blue warbler. Wikimedia Commons

Mike Webster normally would be trekking around the wilds of New England by now, searching for flashes of blue and white among the trees.

Each spring, he travels to the Hubbard Brook Experimental Forest in New Hampshire’s White Mountains to study the black-throated blue warbler — a tiny migratory songbird that splits its time between the Caribbean and eastern North America.

An ornithologist at Cornell University, Webster is part of a long-term study that’s kept tabs on the birds for decades. Webster joined in the 1990s, but the study has been ongoing since the mid-1980s.

For now, though, Webster is stuck at home. This could be the first year in the project’s history that scientists don’t collect any data at all. It’s a worrisome prospect that faces his work and an untold number of long-term research projects worldwide.

"Right now, our plan is to send a much smaller field crew to Hubbard Brook, if and when we’re allowed to do that," Webster told E&E News.

But the final plan is still up in the air.

Pandemic-related shutdowns — including restrictions from both the state of New Hampshire and the U.S. Forest Service, which owns and manages Hubbard Brook — make it uncertain how many researchers will be allowed on-site this summer.

"Worst-case scenario is we don’t go at all, and we just have a great big hole in our long-term dataset," Webster said.

In a typical year, eight to 12 bird researchers show up at Hubbard Brook by mid-May. They spend the rest of the summer looking for nests, counting new babies, capturing adults, collecting blood samples and tagging the birds so they can be identified in the future.

The program provides continuous data on many aspects of the warbler population: whether it’s growing, how many birds return from one year to the next, how well the babies are surviving, etc.

"The breeding season has actually been getting longer, because spring is getting earlier and autumn is coming later," Webster explained. "It’s a great system of understanding how things are changing and how birds are adapting in response."

In the worst-case scenario — if this year’s field season were canceled — it would cause difficulties, but it wouldn’t be the end of the world. There are statistical methods scientists can use to help smooth over occasional gaps in their datasets.

Still, the scientists are hoping to avoid any major interruptions.

If the team can manage to get just two or three people out there by the beginning of June, it won’t be too late to monitor the breeding season. Even with such a small team, they could still track a dozen or so nesting pairs and tag as many birds as possible to keep their datasets going.

That’s still a possibility for now.

"The way we’re handling it so far is to just make contingency plans," Webster said.

Research groups around the country are doing the same.

Due to the pandemic, many labs have temporarily shuttered. A broad swath of field expeditions have been postponed (Climatewire, March 23). In some cases, these hiccups are threatening to interrupt some of the country’s longest-running environmental studies.

Scientists are now working on ways to keep their decadeslong datasets intact. In many cases, that means downsizing their research teams and focusing on the most basic scientific priorities.

"The best case for us is we have continuous data," Webster said. "Because then the analyses are very straightforward and meaningful."

Fear of missing out

Hubbard Brook is a special site, and not just because of the birds. It’s home to one of the nation’s longest-running environmental studies, founded in 1955.

For the last six decades, scientists have continuously collected data on just about every aspect of the forest ecosystem, from the growth of the trees to the nutrients in streams.

Perhaps most famously, data collected at Hubbard Brook helped lead to the discovery of acid rain in the 1960s.

Today, Hubbard Brook Experimental Forest is part of a national program known as the Long-Term Ecological Research network, funded by the National Science Foundation. It’s a group of 28 research sites, mostly in the U.S., where scientists conduct continuous environmental research. Many of these sites have operated for decades.

Spring and summer are typically Hubbard Brook’s busiest seasons, according to the site’s principal investigator, Gary Lovett, an ecologist at the Cary Institute of Ecosystem Studies. Twenty to 30 collaborating institutions participate in projects.

But much of the usual research is being curtailed this year to comply with social distancing policies.

Instead, participants are hoping to maintain the most basic observing and monitoring efforts this summer — enough to ensure there are no serious interruptions to the longest-running, most fundamental datasets.

Some of the site’s lead collaborators have organized a committee to strategize.

"This group — we call ourselves the task force — is trying to coordinate to make sure that the very minimum basic research does get done to maintain the long-term records," Lovett told E&E News. "And that the people who do come, that we can maintain social distancing."

Other long-term research sites are prioritizing in similar ways. And it’s not just to make their statistical analyses easier.

One of the benefits of long-term, continuous monitoring is that researchers are much less likely to miss unusual or interesting scientific events when they occur.

That’s one of the concerns at Toolik Field Station on Alaska’s remote North Slope.

Scientists have conducted research at the station, another member of the Long-Term Ecological Research network, since the 1970s, with a focus on the rapidly changing tundra ecosystem. Toolik has mostly shut down since the end of March, to protect both scientists and members of nearby North Slope communities, some of whom live hours away from the nearest medical facilities.

According to the site’s principal investigator, Ed Rastetter, it might be possible to send a handful of researchers this summer to help maintain some of the site’s long-running experiments — but that’s still under consideration.

"A major worry is not being able to collect data if some unusual event were to occur," Rastetter said in an email. "The Arctic is undergoing rapid warming. For the most part, the ecosystems have been fairly resistant to these changes, at least on a year-to-year time scale. However, unusual events do occur that we think might jump the system response to warming forward."

For example, thunderstorms are happening more frequently on the North Slope as the area warms. As a result, there’s some concern about lightning strikes causing wildfires on the Arctic tundra.

Warming is also causing permafrost to thaw in some parts of the Arctic, which occasionally causes an event known as a "thermokarst slump" — this is when the ground softens and collapses, sending soil and vegetation oozing into nearby streams and lakes.

According to Rastetter, "it is important to be able to send a team into the field to get initial measurements when these disturbances happen."

Researchers at the opposite end of the world have some of the same concerns.

Since the 1990s, scientists have spent summers at the McMurdo Dry Valleys in Antarctica. It’s the largest ice-free region on the Antarctic continent, a barren, rocky expanse of land dotted with lakes and streams.

For decades, researchers have studied microbial communities in the soil and water. As the climate warms, they’re interested in how the area could change as the surrounding regions melt and more liquid water flows into the valleys.

In a typical summer, a maximum of 31 people might spend the season doing research there.

The Southern Hemisphere’s summer is still months away, so the research team has time to prepare. But organizing logistics for a season in Antarctica is complex and time-consuming, and team leaders are already working with the National Science Foundation to determine what will be possible this year.

Gooseff said he hopes he can get a small team out to the Dry Valleys to conduct some of the most basic research. But transportation to the research site requires helicopters, and it’s still unclear whether helicopter teams can be hired in the coming months, given concerns about the pandemic.

In the worst-case scenario, without any helicopters at all, it would be nearly impossible for the scientists to do any of their usual research in the Dry Valleys. That would mean interruptions to many long-standing datasets, from atmospheric physics and water chemistry to the biological communities that call the region home.

And there’s always the looming anxiety that some interesting event might occur, totally undocumented, during the gap.

"The year that we skip … will be some unique year," Gooseff said. "That’s Murphy’s law."

Social distancing in the lab

It’s not just remote field sites that are working to keep their long-term projects going. Laboratories are also reducing staff and strengthening social distancing protocols to ensure their most fundamental work can continue.

NOAA’s Global Monitoring Laboratory maintains some of the world’s most fundamental, continuous records on greenhouse gases in the atmosphere. Founded in 1972, the program collects air samples from more than 50 sites around the world.

Some measurements can be conducted remotely. Sensors at certain sites automatically transmit data on things like carbon dioxide concentrations in the atmosphere.

But other analyses can only be done in person. Collaborators at each site regularly collect air samples in large flasks and send them — meticulously packaged — back to the program’s headquarters in Colorado.

"The global flask network with NOAA is pretty much the gold standard globally in terms of monitoring the Earth’s atmosphere with real samples, not just satellites or models," said Bruce Vaughn, head of NOAA’s Stable Isotope Lab, which is housed at CU Boulder.

The Stable Isotope Lab is an integral part of the program. It conducts detailed chemical analyses that help scientists understand trends in greenhouse gases other than carbon dioxide, such as methane and nitrous oxide.

The pandemic has caused a few minor interruptions, Vaughn noted. A few sites, including in Mongolia and New Zealand, have been unable to send flasks on their usual weekly basis.

But the vast majority of the network is still running, meaning most of the usual data is still coming in.

The lab has had to take precautions to make sure its basic functions can continue.

Typically, a professional courier service ferries the precious flasks among NOAA’s various laboratories. That’s been suspended, and dedicated scientists are now transporting the flasks themselves.

The lab is also running on a staggered shift these days, Vaughn added, with the first staff arriving early in the morning and the rest trickling in and out until late in the evening.

"The overlap is very small between any staff," he said. "We wipe down surfaces religiously. Require masks and gloves. And all the flasks are being wiped down and disinfected as much as possible when they arrive in Boulder."

These datasets are particularly interesting now. Pandemic-related shutdowns are contributing to a temporary dip in air pollution and global carbon emissions.

The declines are almost certain to be short-lived. But continuous monitoring efforts are helping keep track of the changes in real time.