‘They would not unmute me.’ Inside BLM’s virtual meetings 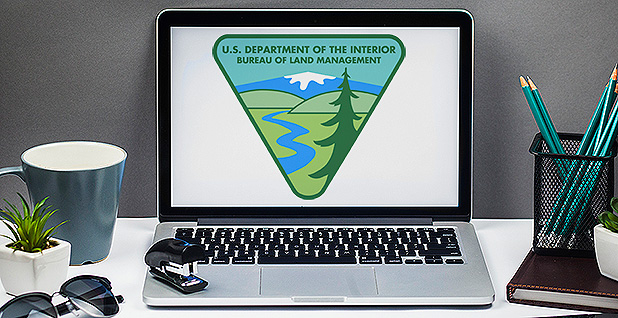 The Bureau of Land Management has switched to virtual public hearings during the COVID-19 pandemic as part of its push to keep working. But pushback has been fierce from some circles that the virtual direction may not serve all communities during the crisis. Claudine Hellmuth/E&E News (graphic);Freepik(computer photo);BLM(logo)

With a pandemic shuttering much of the country and ushering business online, the Bureau of Land Management has turned to virtual public hearings to meet its obligations under the National Environmental Policy Act.

And the jury is still out on how well that’s going.

According to BLM, its first virtual hearings — for an oil project in Alaska — brought in a rash of new viewers and participants. But critics are telling a different story.

The Willow project would expand ConocoPhillips’ drilling plans on Alaska’s North Slope. Willow would move drilling deeper into the National Petroleum Reserve-Alaska in the direction of currently protected habitat. It would also increase development that may affect the Alaska Native village of Nuiqsut, which sits just inside the NPR-A border and is home to roughly 400 people.

When Willow meetings took place on the ground, 250 people showed up over the course of six meetings. Those gatherings were held in Alaska Native villages, Fairbanks and Anchorage.

By comparison, a series of eight virtual hearings last month on updates to the ConocoPhillips plan had 300 participants. The livestreams have been viewed more than 2,000 times, according to BLM.

The agency released a statement Tuesday noting how successful the virtual switch had gone.

"The public is able to watch our presentation over multiple platforms and our public is able to actively participate in the virtual meetings either by computer or telephone and it is a step forward in becoming more open and more transparent," BLM Alaska Director Chad Padgett said in a statement.

But Martha Itta, a resident of Nuiqsut, said in a letter to BLM’s Willow project manager, Rachael Jones, that she was "frustrated and saddened" after the April 23 meeting. She described technology as a hurdle that excludes many members of the public in rural Alaska.

Zoom, an online video platform used for the hearings, also gives moderators a degree of control over the participants, Itta noted.

"I myself was muted after my initial comment and they would not unmute me," she wrote.

The virtual meetings, available online at BLM’s Willow project page, were populated with similar criticisms and accusations of insensitivity on the part of the agency to the pressures and values of affected Native people in the North Slope.

Lesli Ellis-Wouters, a spokeswoman for BLM, said that mute functions were used in the hearings once when a commenter used inappropriate language. She noted that BLM took technical questions by phone and online and posted videos of its presentation.

"Like much of the government, the BLM continues delivering our services to all Americans to the greatest extent possible while safeguarding our employees and communities," she said in an email.

BLM received more than 8,000 comments on Willow, and public commenters participated from across Alaska. The agency has not reported technical glitches or widespread problems connecting to the meetings, other than the hearing moderator losing service briefly. She was covered by a backup. More than 500 participants could fit in each Zoom meeting; that max was never reached.

While many groups have called for BLM to halt its work during the health crisis, those requests have not been ubiquitous.

Alaska’s Republican delegation sent a letter to Interior Secretary David Bernhardt on Monday encouraging a rapid completion of the environmental review process for Willow, particularly in light of the pandemic.

"This project is critical to the economic wellbeing of our state, national energy security, and the Administration’s strategy of energy dominance," Sens. Lisa Murkowski and Dan Sullivan, joined by Rep. Don Young, wrote. "Its importance has only grown as we face an increasingly challenging economy and the need for opportunities to spur recovery once markets stabilize in the wake of COVID-19."

Meanwhile, the Willow virtual meetings appear to have set a precedent for other regions.

In mid-May, BLM will conduct virtual public hearings in New Mexico to consider a resource management plan for the area around Chaco Culture National Historical Park. The area was a crossroads of early civilizations and remains an important cultural heritage site for the Hopi and Pueblo tribes.

House Democrats, including Rep. Deb Haaland (D-N.M.), criticized the release of the management plan for public comment during the pandemic. In a recent letter to Interior, she also brought up concerns about virtual interaction in Indian Country where COVID-19 has hit particularly hard and internet access is limited (E&E Daily, May 5).

More than 30% of tribal lands lack access to basic broadband, according to the Federal Communications Commission.

Gussie Lord, director of tribal partnerships for Earthjustice, said tribes are under extreme pressure from both the pandemic and lack of internet connectivity.

The challenges — including small populations, costs and topography — of bringing the internet to parts of Indian Country are well-documented. Lord said BLM is aware of the burden it’s placing on people to participate in hearings online.

"It’s definitely a problem, and it was a problem before the pandemic," she said.

Kate Kelly, public lands director for the Center for American Progress, said BLM was being inventive during the pandemic but that it may have missed the mark on thoughtfully protecting public comment and ensuring access. She noted that various messaging and comment features and social media livestreams may need to be accounted for as part of official hearing records.

"I don’t think there is consistent policy on it, and it shows," Kelly said.

BLM is not known for its technology prowess and has struggled in the past because of a lack of resources, said Liz Klein, deputy director of New York University’s State Energy and Environmental Impact Center and an associate deputy secretary for Interior during the Obama presidency.

If the agency is to move toward more virtual interaction with the public, it faces a steep hurdle in keeping its obligations to tribes and rural people, who include "ranchers" to "whaling captains," she said.

"The agency does deal with communities that are in the most rural areas in our country," Klein said.

Last week, the Arctic Slope Regional Corp. asked BLM to extend the public comment period for the Willow project. Though it applauded BLM for its effort to move online and encourage more commenters than "face to face meetings," the corporation noted numerous glitches and connectivity problems during the virtual hearings.

It also flagged a concern that its elders in particular were likely to struggle with the technological switch. Those voices are "critical," the corporation said.

The Native village of Nuiqsut and the Kuukpik Corp. have also asked for comment period extensions to the Willow plan.

The end of the pandemic is unlikely to end virtual hearings for BLM now that Alaska has set precedent on how it can be done.

"Using virtual meeting technology allows for communities to attend meetings at their convenience without concerns for health, weather or logistical costs, creating a more efficient way to provide information and receive feedback with lower costs to the American taxpayer," said Ellis-Wouters of Alaska BLM. "It is a new method we will consider in future public comment periods."