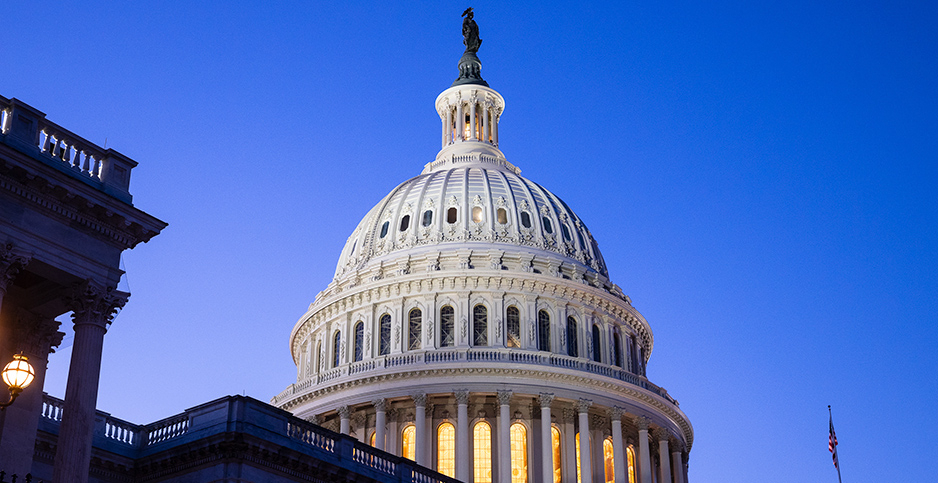 Lawmakers are scrambling to secure priorities, including on energy and the environment, in the upcoming infrastructure package. Francis Chung/E&E News

With $1.9 trillion in additional COVID-19 relief out the door, Capitol Hill is turning in earnest to President Biden’s infrastructure-focused economic recovery plan.

Details remain scant, but like the COVID-19 package signed into law last week, the infrastructure push is expected to follow Biden’s lead — specifically the "Build Back Better" proposal he laid out on the campaign trail.

But the White House has not yet detailed the size and the scope of the forthcoming plan — key decisions that White House spokeswoman Jen Psaki said last week have yet to be made.

"It’s not even something that has been brought to him for a decision quite yet," Psaki told reporters of the president.

When the White House will release its plan remains unclear, but Transportation Secretary Pete Buttigieg yesterday reiterated that the timeline for the push is the Sept. 30 expiration of current surface transportation law.

"We’ve got a clock on everything we’re doing," Buttigieg said in remarks yesterday after touring a UPS facility in Maryland. "We’re not waiting till September in order to act — conversations are taking place right now … and it’s fair to say that in short order, you’re going to be seeing more."

While House and Senate members from both parties are pledging to try to work in a bipartisan fashion on infrastructure — an issue that affects every district — the path to enactment will face numerous obstacles.

Here are four areas to watch in the coming months:

While Biden met with Republican senators during the crafting of the latest COVID-19 relief bill, Democrats ultimately chose to go it alone and pass the package under budget reconciliation. The process allowed them to avoid a Senate filibuster.

House Speaker Nancy Pelosi (D-Calif.) said over the weekend she had ordered House chairs to reach out to their GOP counterparts in the hopes of striking bipartisan deals (E&E Daily, March 15).

If bipartisan agreement should emerge, it’s likely to be around a smaller package, former House Transportation and Infrastructure Chairman Bill Shuster (R-Pa.) said yesterday during a Bipartisan Policy Center forum.

"If President Biden and the leadership in the House and the Senate want to reach across the aisle, I think you could see a policy moving forward probably on the magnitude of maybe close to a trillion dollars, a little under, a little over," Shuster said.

"If they decide to go budget reconciliation, I think you’ll see a package bigger than that," he said. "You know, maybe approaching $1.5 [trillion]-$1.7 trillion."

Caught on a hot microphone after the UPS event chatting with Buttigieg, Maryland Democratic Sen. Ben Cardin said yesterday infrastructure "most likely happens" through reconciliation. Buttigieg said he is "pretty process-agnostic" about the infrastructure push.

Hanging over the infrastructure debate are long-simmering disagreements between the two parties on energy policy, which are certain to escalate in the coming months as Democrats look to add clean energy spending and tax changes to the legislative mix (E&E Daily, March 11).

Both parties are already laying down legislative markers ahead of the debate, with House Republicans yesterday announcing a package focused on nuclear, natural gas, hydropower and carbon capture technologies (Greenwire, March 15).

But the GOP plan is silent on renewables and energy storage — top Democratic priorities. Democrats on the Energy and Commerce Committee last week unveiled their own plan, the "LIFT America Act," which would steer $70 billion toward clean energy and energy efficiency programs, as well as funds for electric grid upgrades and more than $40 billion for electric car infrastructure. The measure will get a hearing in committee Monday.

Democrats will also have to balance their own policy conflicts, including tensions among members from fossil fuel-producing states and progressives who want to see coal, natural gas, and oil left in the ground.

That is likely to turn the debate toward an especially difficult topic — coming up with offsets to keep the costs down, something that helped sink the bipartisan Senate highway bill in the last Congress.

Democrats are already eyeing higher taxes on the wealthy and rolling back business tax breaks contained in the GOP 2017 tax overhaul that passed along party lines — a threat Republicans aren’t taking lightly.

"If Democrats succeed in raising taxes on businesses, on investment, on energy and in growth, the U.S. will plummet to dead last in competitiveness," said House Ways and Means Committee ranking member Kevin Brady (R-Texas) last week, adding that it was too soon to tell what input Republicans will have.

"I don’t know if Democrats are just going to run through an infrastructure, green energy tax hikes reconciliation bill, or if there’s going to be any bipartisan discussions on those issues," he said.

Psaki yesterday sidestepped a question about whether tax increases in the infrastructure package could slow the economy but noted Biden’s campaign pledge that nobody making under $400,000 a year would have their taxes increased.

"His priority and focus has always been on people paying their fair share and also focusing on corporations that may not be paying their fair share either," she told reporters. "So that remains his overarching approach, but there isn’t a package yet where we’re talking about pay-fors yet, so I expect we can have more conversations about that down the road."

Although Senate Republicans in the last Congress struggled to come up with pay-fors to cover a more than $100 billion shortfall in the Highway Trust Fund from the bipartisan highway bill, the GOP is already talking about pay-fors for the upcoming debate.

Rep. Sam Graves (R-Mo.), the ranking member on the Transportation and Infrastructure Committee, last week floated the idea of using the modernization of the U.S. Postal Service’s vehicle fleet as an opportunity to test a vehicle-miles-traveled user fee on a national scale.

That’s an idea that has drawn support from members of both parties as a means to compensate for the decline in revenues from the federal gas tax.

Senate Democrats so far have resisted calls from progressive lawmakers and interest groups to scrap the legislative filibuster or tinker with budget rules that limit reconciliation bills to deficit and spending, in part because of a lack of support from within their caucus.

But there’s been a shift in tone on the issue among moderates, including Manchin, who recently signaled he’s open to filibuster reforms if the 60-vote threshold is retained (E&E Daily, March 8).

Sentiment for procedural reforms may continue to grow in the months ahead, with Senate Majority Leader Chuck Schumer (D-N.Y.) vowing to push House-passed bills on hot topics such as voting rights, gun control and immigration to the floor for votes, where they’re certain to be filibustered by Republicans.

Nevada Sen. Catherine Cortez Masto last week became the latest Democrat to join the calls for filibuster reform, noting that she worked across the aisle when Minority Leader Mitch McConnell (R-Ky.) tried to "shut out the Democratic minority" when he controlled the chamber.

"But McConnell is determined to exploit the filibuster and fight progress on the most urgent crises facing our nation, and if he wants to block action on health care, climate change and voting rights, he should have to stand on the Senate floor and be transparent about his obstruction," she said in a statement.