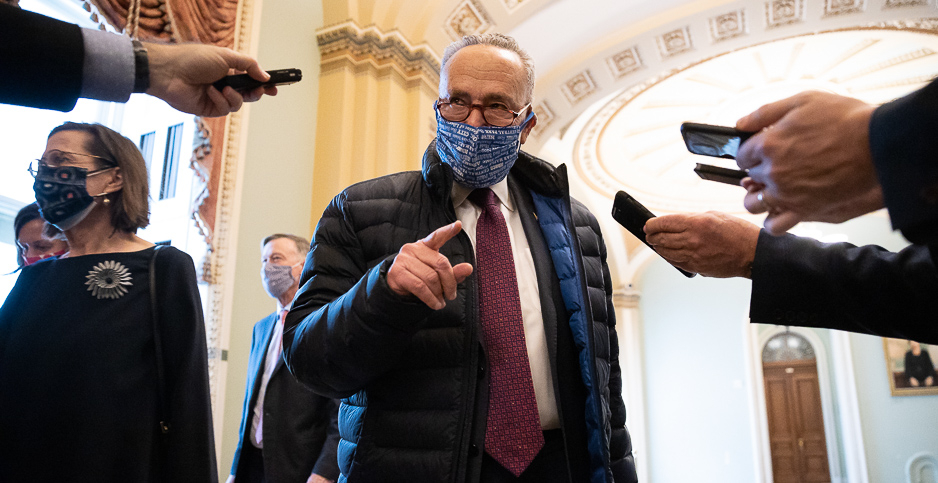 Democrats improved their chances to legislate on climate change and an array of other progressive priorities last night, as they looked poised to win both Georgia runoff elections.

With Democratic Senate control would come a series of changes that offer an easier glide path for the Biden administration’s nominees and a new set of political and policy fights.

The Associated Press called the race for the Rev. Raphael Warnock over Sen. Kelly Loeffler this morning, and Jon Ossoff remains a heavy favorite to hold out against Sen. David Perdue, though the AP has not formally made a call (see related story).

Should the results hold, Democrats would control the Senate in a 50-50 split, giving Vice President-elect Kamala Harris the tie-breaking vote.

It would be just the fourth tied Senate in U.S. history, leaving a degree of uncertainty about how the parties will operate.

The last 50-50 split occurred for a few months in 2001, before a senator changed parties, when Democratic leader Tom Daschle and Republican leader Trent Lott struck a power-sharing agreement that provided for evenly divided committee rosters.

Larger policy fights will play out down the road, but here are a few things to watch in the coming days as the results finalize and the new Senate takes shape:

The Senate’s agenda may not change much in the next few weeks, no matter last night’s results.

But the chamber is scheduled to be out of town until Inauguration Day, and the two parties announced an agreement over the weekend to not introduce new bills until Jan. 21.

Even if Georgia finalizes the results before then, however, Republicans would still technically control the Senate with Vice President Mike Pence still in office until Biden is sworn in.

Democratic victories in Georgia would mean Sen. Joe Manchin (D-W.Va.) gets a chance to lead the Energy and Natural Resources Committee, weeks after he helped push through a massive clean energy and climate package with outgoing Chairwoman Lisa Murkowski (R-Alaska).

It puts West Virginia’s only remaining federally elected Democrat, an advocate for carbon capture and once a skeptic of climate policies like cap and trade, in charge of the Senate’s energy agenda.

Meanwhile, Sen. Tom Carper (D-Del.), a Biden ally, would be in charge of the Environment and Public Works Committee.

The panel is set to play a lead role in developing infrastructure legislation, a top priority for the Biden administration.

Committee rosters are set to get a shakeup, as well, with Democrats gaining seats on each panel and Republicans losing them.

The 2001 agreement, which put Republicans in charge, with Vice President Dick Cheney as the tie-breaking vote, left committees with evenly divided rosters, a scenario that could potentially limit committee work this time around.

In the event of a tie vote in committee, the majority leader could initiate a procedural motion to bring the bill or nomination to the floor, according to the Congressional Research Service, which would take up time on the floor.

For Biden, the most immediate effect of last night’s results is that he could have a much easier time confirming his Cabinet picks.

Democrats would largely control how quickly nominees get hearings and votes on the floor, and they wouldn’t need Republican votes to confirm them.

While current Senate Majority Leader Mitch McConnell (R-Ky.) had said Biden’s picks would get votes on the floor, Republicans had still been gearing up to put some of them through a tough confirmation process.

That could bode well for nominees like Neera Tanden, the president-elect’s choice to lead the Office of Management and Budget, who sparked controversy for past tweets about Republican lawmakers.

The same goes for picks like Rep. Deb Haaland (D-N.M.), who Biden tapped to lead the Interior Department and whose views about fossil fuels could be unpopular with the GOP.

Perhaps the biggest question for a Democratic Senate, though, would be how to deal with narrow margins.

Some Democrats have called to eliminate the filibuster so that the party’s priorities, including a major climate change bill, could pass by a simple majority.

But Manchin has already said he would not vote to expand the Supreme Court or nix the filibuster, potentially killing the idea with a 50-50 split.

Should the West Virginia Democrat hold fast on that stance, the next best bet for the party is likely budget reconciliation, a process that allows certain budget-related items to bypass the filibuster.

Rhode Island Sen. Sheldon Whitehouse and other Democrats have talked up the possibility of using reconciliation to pass carbon pricing legislation.

Sen. Bernie Sanders (I-Vt.), a progressive favorite and onetime rival of Biden in the Democratic presidential primary, is in line to chair the Budget Committee, which controls the reconciliation process.

But Democrats also have a list of other agenda items that could be lumped together with climate or take precedent in a reconciliation bill, namely infrastructure, health care reform and additional COVID-19 relief.

House Speaker Nancy Pelosi (D-Calif.) said in November, for instance, that Democrats could use the tactic to prop up the Affordable Care Act and tackle the pandemic (E&E News PM, Nov. 2, 2020).