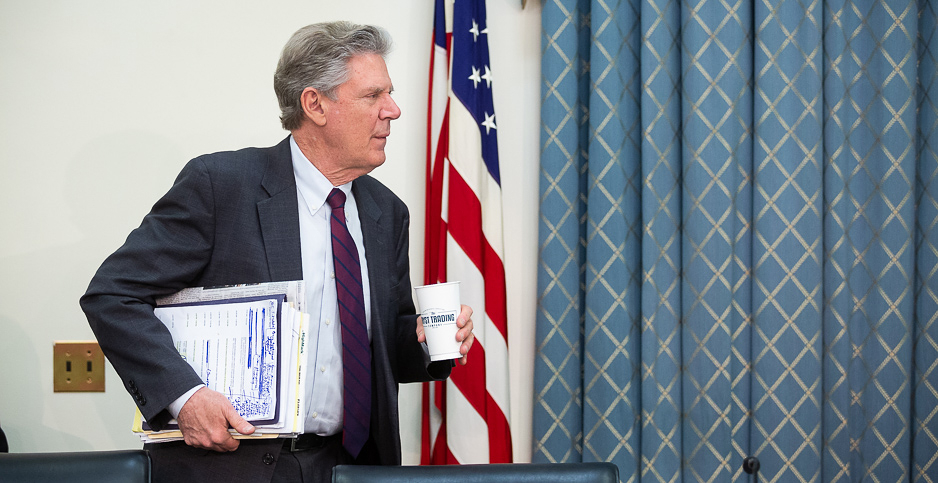 Energy and Commerce Committee Democrats yesterday rolled out an enhanced version of their climate bill, an ambitious effort to overhaul the power sector and decarbonize the economy.

It’s paired with more than $500 billion in spending authorizations and a wide range of environmental justice, transmission and environmental cleanup provisions.

The bill reflects a significant effort by House Democrats to line up with the Biden administration on climate policy and marks a first step toward addressing the issue on Capitol Hill (E&E News PM, March 2).

"The bill marks the first introduction of a major comprehensive piece of climate legislation in over a decade, and it’s exactly the kind of federal leadership that I think the moment demands," Energy and Commerce Chairman Frank Pallone (D-N.J.) told reporters yesterday.

Democrats have made substantial updates to the legislation since they first offered a draft version last year to mixed reviews from industry and environmental groups.

Here are policy areas and political machinations to watch as lawmakers attempt to advance the bill:

Looking to the White House

The bill, in many ways, is an attempt to put legislative language to some of the climate promises President Biden made on the campaign trail.

The clean electricity standard, for instance, has been tweaked to achieve power-sector decarbonization by 2035, the target the Biden White House has called for.

On the flip side, Democrats removed a provision from last year’s draft bill that would have required more stringent greenhouse gas emission standards for cars, with the Biden EPA widely expected to revise the Trump administration’s fuel economy rollback.

"This is a crucial sign of momentum behind climate action in Congress and behind Biden’s commitment to a 2035 clean electricity sector in particular," said Sam Ricketts, a senior policy adviser for Evergreen Action who worked with the committee on the bill.

"That said, the pathway forward on an investment agenda is still being sorted."

While the "CLEAN Future Act" doesn’t come close to hitting the $2 trillion investment in climate policy Biden promised during his campaign, it would authorize $565 billion over 10 years.

That’s significantly more than the draft version, which would have authorized roughly $316 billion in spending overall (E&E Daily, Feb. 26, 2020).

The new measure offers a grab bag of new grant and spending programs. They include funding for renewable energy and resilience projects at public facilities, an EPA grant program to decarbonize ports, $2.5 billion for EPA’s clean school bus program to help put zero-emissions buses on the road, and a $500 million annual reauthorization for the Diesel Emissions Reduction Act.

Environmental justice communities are a major focus. The bill would create a program to pay to remove lead service lines at no cost to homeowners.

It would also push EPA to clean up all Superfund sites that are vulnerable to the effects of climate change within the next decade.

Democrats are hoping to move the bill through regular order, which would mean getting Republicans on board.

But they also didn’t rule out moving parts of the bill through budget reconciliation — which allows certain legislation to bypass the Senate filibuster — or breaking it up to ride on an infrastructure or economic stimulus package.

"It’s hard to say at this point what happens after it gets out of committee," Pallone said yesterday. "Obviously, we’d like to move it through regular order. I don’t rule anything out, but I’m hoping that the Republicans will participate so we don’t have to go through reconciliation."

The legislation drew a notably neutral response yesterday from the U.S. Chamber of Commerce. The nation’s largest business lobby has historically been an opponent of climate policy but has softened its stance in recent years.

"The Chamber appreciates Chairmen Pallone, Tonko, Rush and other Energy and Commerce Committee members for commencing a legislative effort to combat climate change this Congress," U.S. Chamber Senior Vice President of Policy Marty Durbin said in a statement. "As lawmakers move forward, we urge them to focus their efforts on developing market-based mechanisms for reducing carbon emissions that are durable and can garner bipartisan support."

Transmission is increasingly seen as critical for additional deployment of clean energy and renewable energy on the grid, and right now, transmission bottlenecks could prevent a clean energy transition from kicking in full force, experts warn.

The Texas and California blackouts over the past year have also reinforced the need for additional grid investment to shore up transmission in a changing climate.

The Energy and Commerce proposal calls for enhanced federal power on transmission siting and directs increased focus by the Federal Energy Regulatory Commission on getting those wires built.

The bill would direct FERC to establish an Office of Transmission to oversee the agency’s transmission siting and incentives work. Additionally, lawmakers would seek additional technical conferences from FERC about how to better oversee interregional transmission assets.

Such permitting authorities for transmission siting would echo its pipeline approval authority.

Rounding its transmission focus, the bill also includes a $750 million spending authorization over 10 years for DOE to disperse technical assistance grants to state and local governments for help in evaluating, permitting and siting of interstate transmission lines.

Democrats have long portrayed climate action as an economic opportunity, and this bill continues that trend.

New to the debate is a policy focus on ways to help move communities and fossil fuel workers away from coal and oil and gas extraction to a clean energy economy.

The legislation would establish an Office of Energy and Economic Transition in the Executive Office of the President to lead efforts to provide workers and communities transition resources, like retraining grants and manufacturing incentives.

But the Biden administration has come under fire from Republicans, who point to potential lost revenue in states that depend on fossil fuel royalties to pay for government services like health care and schools.

To address those needs, the bill would create a new grant program "to aid local government entities that have lost significant amounts of revenue due to the nation’s transition to net-zero GHG emissions," the section-by-section summary said.

Elements of prior bills like the "Break Free From Plastic Pollution Act" make an appearance in the legislation, including a "temporary pause" on new permits for plastics facilities.

EPA would, meanwhile, develop guidelines around labeling for recyclables and compostables, with manufacturers similarly required to standardize labeling.

Other significant elements include a national container deposit system and the creation of a task force to study extended producer responsibility.