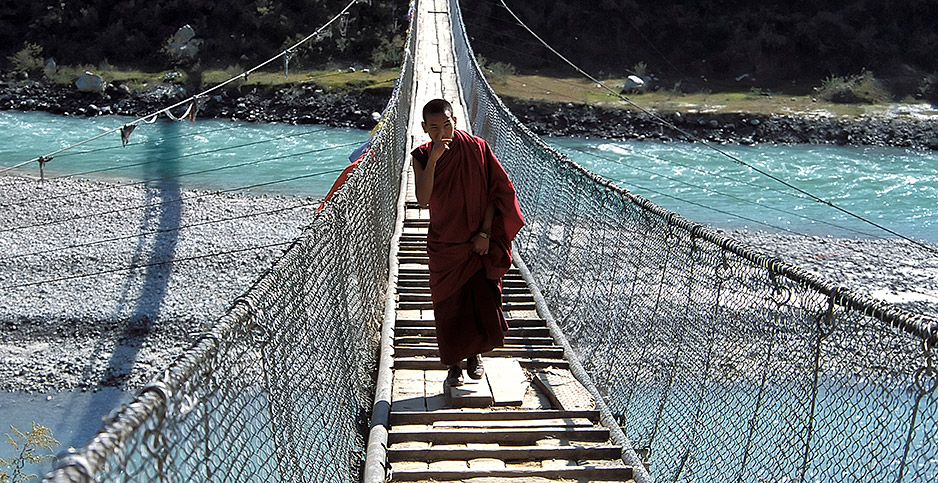 A monk walks across a suspension bridge over the Dang River in Bhutan. The country is among a small number of nations to have net-negative carbon emissions. Peter Langer/DanitaDelimont.com

The tiny Buddhist kingdom of Bhutan declared itself carbon neutral during climate talks more than a decade ago. It was the first time in the world that happened.

"Governments were so busy arguing with one another and blaming each other for causing climate change, that when a small country raised our hands and announced, ‘We promise to remain carbon neutral for all time,’ nobody heard us," then-Prime Minister Tshering Tobgay said in a 2016 TED talk.

By then, other countries were clamoring to reach similar targets — not immediately, of course, but decades in the future. And Bhutan found itself in the spotlight for absorbing more carbon than it emits, making it "net negative."

Now that status is at risk.

"Bhutan is carbon negative, but emissions are rising, so it is not likely to be carbon neutral in the future without policy changes," said Anna Chapman, an analyst at Climate Analytics. "Particularly important is the energy and industry sectors, as these sectors are experiencing large emissions increases."

As the United States and other rich nations focus on reducing emissions from gas-guzzling vehicles and power systems, Bhutan is moving in the opposite direction. It could soon be contributing to climate change for the first time in its history.

It’s building roads and housing and harnessing hydropower to feed India’s thirst for electricity. The Asian Development Bank estimates that Bhutan’s carbon emissions could triple by 2030.

Here’s an example of why: Car ownership is growing at around 15% annually.

Dozens of countries that have contributed little to the climate problem are signing off on polluting power projects, industrial facilities and roads that they hope will help propel their economies forward. Sometimes carbon-absorbing forests are razed by timber barons and agribusinesses and replaced by palm oil or rubber trees — new sources of emissions.

The stakes for this kind of growth are high.

If the transition to clean energy falters in the world’s developing economies, it could be "the major fault line" in global efforts to tackle climate change, the International Energy Agency wrote in a recent report (Climatewire, June 9).

On the plus side, the club of countries vowing to reach net zero is expanding — and some are going further.

Around 20 countries have submitted carbon inventories to the United Nations that show they’re removing more emissions from the atmosphere than they’re contributing, according to Thomas Hale, a public policy professor at the University of Oxford’s Blavatnik School of Government and co-author of a joint assessment with the Energy and Climate Intelligence Unit on net-zero targets.

Most are small, low-income nations blanketed by forests. They are also hoping to develop, Hale said.

"And if they go down the old path of development, they will most likely lose that status," he added.

Caught between wanting to pull their people out of poverty and preserving their natural environments, these countries need money and technical assistance to make a clean transition, say green groups and development experts.

They may also need to start thinking about carbon accounting differently.

Marked by steep peaks of the Himalayas and wedged between Asian giants China and India, Bhutan is in many ways an outlier. It measures development based on happiness rather than gross domestic product and restricts tourism. Almost all its electricity comes from hydropower, much of which it sells to neighboring India.

It is small and undeveloped and has vast tracts of forest cover, which acts as a natural sink by absorbing carbon emitted from other sources. The majority of its roughly 750,000 people work in agriculture or forestry.

John Lang, an analyst at the Energy and Climate Intelligence Unit, said in an email that Bhutan’s carbon-negative profile is driven by aspects of development, demographics and land use — rather than intentional policy.

Few wealthy nations such as the United States, or those with growing populations and energy demands, like India, can follow a similar path.

Its constitution mandates that at least 60% of the country’s land area be under forest cover in perpetuity. Its Gross National Happiness index, which guides development policy, has environmental conservation as a pillar.

Proposed mining, road and major construction projects have been rejected for not lining up with this philosophy, said Thinley Choden, an environmental consultant and head of the Center for Sustainability Studies Bhutan.

Take the eastern district of Lhuntse, one of the country’s poorest regions. There, the balance between development and conservation was underscored by a precarious road project. Proposed more than a decade ago, the Shingkhar-Gorgan highway would climb for 34 miles into the mountains through treacherous winter passes. It would also open up a region squeezed off from growth by its remoteness.

According to news reports, it has support from both local communities and government officials.

Here’s what’s keeping it from being built, as least for now: The highway would slice through a corner of a national park where endangered royal Bengal tigers roam. The National Environment Commission has reportedly rejected a request for construction due to an inadequate environmental impact report.

For now, trees are Bhutan’s greatest asset when it comes to beating back the changing climate.

From the cold, temperate foothills of the Himalayas to its subtropical border with India, nearly three-quarters of Bhutan is cloaked in forest. (The country is about the size of Maryland.)

Those vast tracts of trees absorb all of the country’s emissions — and millions of tons of CO2 released by other nations.

It’s no longer the only one.

Suriname, the small South American nation north of Brazil, is net negative too, according to the Energy and Climate Intelligence Unit’s Net Zero Tracker. That’s because nearly 90% of the country is swathed in tropical forest.

"If you’ve got a country with huge amounts of forest and very little fossil fuel combustion, that country is probably going to be a lot closer to net zero than a country where the opposite is the case," said Taryn Fransen, a senior fellow at the World Resources Institute.

Bhutan’s challenge will be to keep emissions low as the country grows and urbanizes, said Nancy Harris, research manager at Global Forest Watch, a forest monitoring system hosted by the World Resources Institute.

"In the near term, forests are super-important," Harris said. "So is reducing fossil fuel emissions."

But relying on trees to offset emissions can be problematic. One issue is that climate projections already incorporate global tree cover to estimate future carbon levels, so forests don’t offer deep additional cuts to global emissions.

Another issue relates to flames and saws.

Research shows that carbon sinks in places like Brazil are at risk of suddenly becoming sources of warming as forests become more prone to fire. They can also be cut down.

"If that were to happen, all of this natural sequestration would go from being our biggest ally in this race to net zero to a huge problem," said Hale, the professor from Oxford.

In 2015, Climate Action Tracker dubbed Bhutan a "role model" for its ambitious climate targets. Now it’s no longer considered compatible with the long-term goals of the Paris Agreement, which aims to limit warming to 1.5 degrees Celsius.

That’s because Bhutan’s climate targets would be "insufficient" if its forests were removed from carbon calculations, according to the tracker.

In the capital, Thimphu, urbanization and other forms of development are rapidly changing the landscape, said Choden, the environmental consultant. Waste is growing, but not enough to make recycling profitable. Traffic jams, once unheard of, are now common. Many of the current construction techniques and materials come from India and are not energy efficient.

"Although we are a carbon sink right now, or carbon negative, if we don’t change how we consume and live and do business, we can very quickly lose our carbon neutrality," Choden said.

"As a developing country, progress and economic growth — obviously, you can’t sacrifice that," she added. "But how can you make it more green?"

Another thing that sets Bhutan apart is the government’s stated commitment to keeping emissions low.

"We consider that even the smallest contributions to the global challenge to limit temperature rise is important and would like to set an example for others," Sonam Wangdi, secretary of the National Environment Commission, said in an email.

Earlier this month, Bhutan updated its Paris Agreement target to include a reduction in vehicle emissions of 43% by 2050. It’s providing financial support for electric taxis and other passenger vehicles and pushing to introduce low-emissions freight transportation.

"[Bhutan] has the benefit of being able to avoid fossil fuel dependency and leapfrog outdated technologies," said Chapman from Climate Analytics.

Hydropower can help with that.

Because the country gets almost all its power from mountain river dams, it could run future fleets of EVs on clean energy.

But its dams also face threats from the potential impacts of climate change, such as flash floods that could lead to their collapse.

A long-standing member of the Climate Vulnerable Forum — a pact of countries disproportionately affected by the consequences of global warming — Bhutan is seeing glaciers disappear and water sources run dry. Officials say new policies enhance climate resilience to soften the danger Bhutan faces from other countries’ emissions. They’re also hoping their efforts will push other countries to do their part.

"I cannot understand this irony of contributing a lot to environment preservation, yet having to suffer so much," Prime Minister Lotay Tshering said during the White House climate summit in April.