This country loves Teslas and petroleum 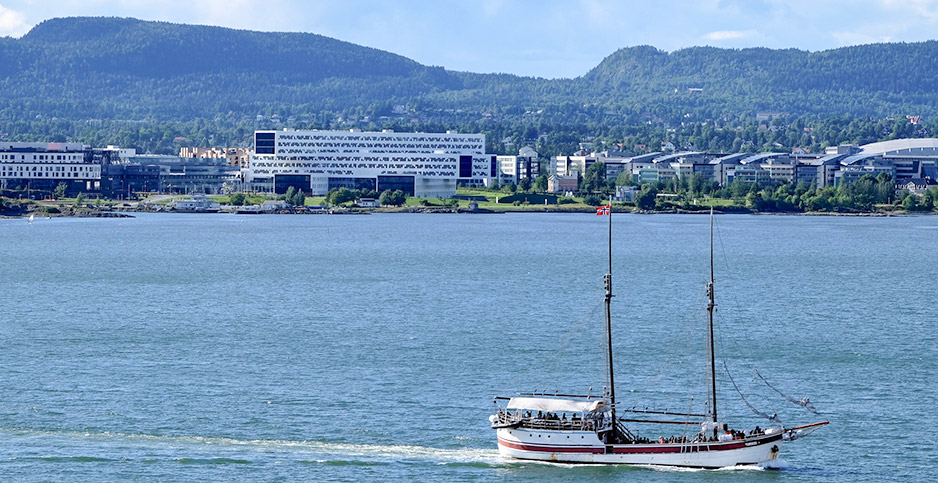 In Oslo, Norway, the office building of Statoil is a dominant feature on the landscape. Lars Plougmann/Flickr

Norway is a study in climate change contradictions.

The Nordic country of 5.2 million inhabitants has earned its place in the top tier of global climate champions, waging war against deforestation abroad while using renewable energy to power its Teslas at home.

But the greenhouse-gas-intensive oil and gas sector remains far and away its most lucrative industry, fueling other energy-hungry nations while funding a robust domestic welfare system and educating a talented workforce that President Trump wistfully hinted earlier this year might be welcome in the United States.

Norwegians say greenness comes naturally to a population proud of its famous mountains and fjords, skiing and mountaineering. They learn to sort their garbage from recyclables as schoolchildren and see themselves as good global citizens.

Norway’s green credentials stretch back to the late 19th and early 20th century, when it industrialized using hydropower from its network of rivers and waterfalls as other countries like Great Britain powered up with coal.

The country still draws 97 percent of its electricity from hydropower, and its exported power supports neighbor countries’ renewable ambitions, including Denmark’s target of 100 percent by 2035. Norwegian homes are heated with electricity, not gas, and incentives and consumer demand mean that half the cars sold in Norway last year were either electric or hybrid.

"It’s cool to have a Tesla in Norway," Norwegian Ambassador Kåre Aas said in a recent interview with E&E News. It was a topic that came up, he said, during the January White House visit between Norwegian Prime Minister Erna Solberg and Trump.

"She told him that the electrical car is good for business," said Aas, citing "an important interaction" between the leaders on the business upside of strong climate policies — a message that will continue with a Washington state exhibition of electric-powered Norwegian ferry boats in May. Norway bought 8,460 of the 102,000 Teslas sold globally last year.

Aas said his embassy’s outreach to the United States is a significant part of its climate strategy.

"After the decision by President Trump to withdraw from the Paris Agreement, we intensified our interaction with members of Congress but also with different states like California," he said.

Norway’s government is phasing out cars that run on fossil fuels by 2025 and has vowed under the Paris deal to cut emissions at least 40 percent by 2030. Avinor AS, a state-owned company that operates most of Norway’s airports, has called for the development of electric airplanes.

Norway is a progressive voice in international climate negotiations and uses its substantial foreign aid heft to combat deforestation abroad, including as the largest contributor to the Amazon Fund for deforestation — until it scaled back its contribution last year over concerns about Brazil’s rising rates of deforestation.

"I think that most people take great pride in the way the Norwegian government has set an ambitious standard on climate and other social issues, including international engagement," said Bjørn Otto Sverdrup, corporate sustainability chief for Statoil. The company recently announced plans to change its name to Equinor to highlight a diversifying business model.

But as Norway’s already-modest domestic demand for oil and gas continues to dwindle, the industry still accounts for half of the country’s total exports. In 2016, it exported 115 billion cubic meters of gas, trailing only Russia and Qatar. A quarter of the gas the European Union uses is Norwegian.

And petroleum revenues have filled Norway’s sovereign wealth fund for nearly three decades — a $1 trillion entity that now owns 1.4 percent of the world’s listed stocks and carries a mandate of financing Norwegian college degrees, hospital visits and retirements for generations to come.

"We are exporting 10 times as much energy as we use ourselves," he told E&E News.

Norway’s government shows no signs of killing the goose that laid this golden egg.

The oil and gas industry employed 185,300 people in 2016 — a whopping 7 percent of the nation’s total employment. Norway continues to make new leasing areas available to the industry in ever more remote and fragile parts of the country’s north. Last June saw Norway offer 93 blocks for oil and gas exploration in the Arctic Barents Sea, a region that environmentalists warn would be particularly vulnerable in the case of an oil spill.

Norwegian oil and gas development generally gets high marks for environmental practices, and Sverdrup and Aas both say it’s been possible to strike a balance between environmental protection and economic development. Norway’s fishing industry and its natural environment are at stake.

"We have been able to manage the company’s interests, Norway’s interests for extracting oil and gas, while at the same time preserving the environment," said Aas.

Sverdrup referenced a "tradition of dialogue" in Norway.

"If there are problems, let’s address the problems and talk about issues and find solutions," he said.

But environmentalists say Norway fails to adequately consider the role its petroleum plays in propping up global dependence on fossil fuels. For all its greenness, Norway has not been a good member of the global "keep it in the ground" climate movement, preferring instead to take it out of the ground — or the seafloor — and sell it.

Global warming considerations play a limited role in environmental assessments of new projects, environmentalists note, with emissions from the development itself counted toward Norway’s domestic climate commitments but not the fuels’ combustion overseas. That encourages efficient development but doesn’t prevent development.

That’s a problem Greenpeace Norway is suing to fix, arguing in a lawsuit with two partner organizations that the country’s constitution compels it to consider global climate impacts when making the decision to offer new leases. The courts found against Greenpeace and its partners in a January decision that is being appealed.

Gulowsen said exported emissions from Norwegian oil and gas have only become a subject of national debate over the last few years.

"There is very, very little awareness in most of Norway of how big the oil industry is and how much direct and indirect pollution it represents," he said. "Almost nobody knows that our annual export of emissions from oil and gas is more than 10 times the amount of CO2 of our national emissions."

Thomas Theis-Haugan of the Norwegian environmental group Bellona said more exploration in Norway’s Arctic not only threatens the international goal of keeping warming to well below 2 degrees Celsius, which Norway has embraced, but is unnecessary in the face of falling demand at home and abroad. Even if Statoil develops some of the leases in the Barents Sea, they won’t be producing until 2030, he noted, by which time Norway and the European Union have promised deep cuts in fossil fuels use.

That’s a question that the Norwegian government, its sovereign wealth fund Norges Bank and Statoil have all grappled with in recent years as they look to diversify away from the industries that made them so wealthy.

"The government has been focusing on how to make the transformation from the present Norway as a gas-producing nation and where the oil-and-gas-producing industries … have been the main elements of Norway’s economy, how to transition that into a greener and bluer economy," he said, referring to ocean health.

The government released a "green competitiveness" road map last year that calls for the creation of an investment company to promote low greenhouse gas technologies among other diversification measures.

The same concerns are changing the way Norway’s sovereign wealth fund does business. In 2015, the Norwegian Parliament approved the fund’s proposal to exclude businesses that are more than 30 percent invested in coal. In November, it proposed a similar exclusion for oil and gas investment — a move that could impact global markets, given the size of the fund.

But Norges Bank cited practical, rather than altruistic, reasons for the proposal, which must still be approved by Norway’s Ministry of Finance and Parliament. Norway’s economy is already too exposed to global oil and gas prices, its officials said, so the fund requires diversification. Separately, the fund is also looking at whether to blacklist companies in oil, steel and other sectors for poor greenhouse gas performance. It’s also working with other large pension funds to create new norms around climate risk and climate investment.

Statoil’s transformation into Equinor comes as that company eyes an expansion of its renewable and non-fossil-fuels portfolio. It has pledged to put 15 to 20 percent of its annual capital expenditure toward clean energy projects by 2030 and to develop its business to support the goals of the Paris Agreement.

Statoil’s annual investment base is $10 billion, meaning the amount allocated to renewables would be up to $2 billion. Greens note that still means at least $8 billion a year will go to support new investment in fossil fuels development in 2030, but Sverdrup said the Statoil pledge pushed the envelope.

"It’s quite difficult actually to build a renewable portfolio on that scale, because a lot of the renewables projects that we’ve seen are on quite a small scale," he said.

Statoil, a publicly owned and independent company in which the Norwegian government holds the majority interest, acquired a plot off the coast of New York state last year for a new 1-gigawatt offshore wind farm to be called Empire Wind.

"I think we’re very proud that we’re part of that," said Sverdrup. "And we believe we have some experience and competence from our oil and gas activity that is relevant."

Asked about his opinion about the Trump administration’s plans to open the Atlantic coast to oil and gas leasing, Sverdrup expressed general support for new access to resources and said it would be unlikely to harm offshore renewable development.

"We really believe in coexistence," he said. "Rarely is it a question of either-or."