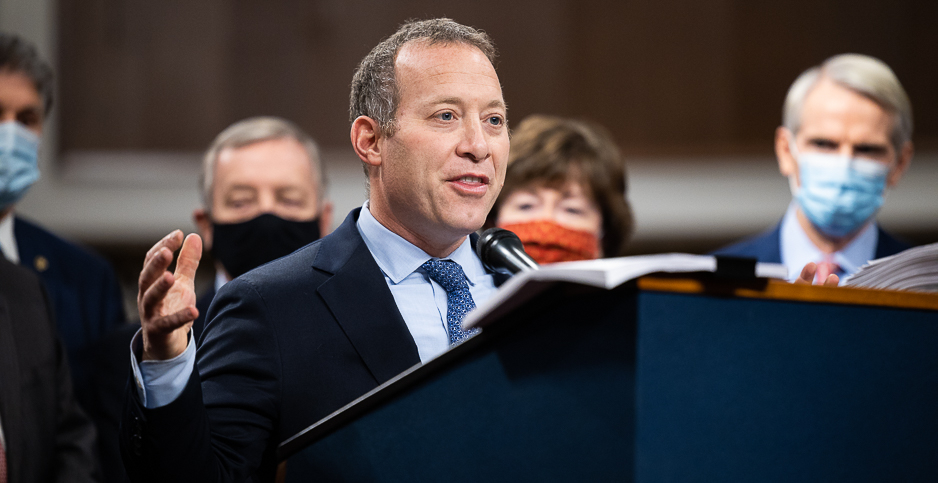 “I wish we had also put up slides earlier today that look more like this one, about how many jobs your firms have created,” he said, holding up a printout to the bankers, “Or slides showing how many entrepreneurs and small and minority-owned businesses have been supported by your institutions.”

Gottheimer did not explicitly defend fossil fuel financing, like some Republicans on the panel did. He supports carbon pricing, joined the Climate Solutions Caucus and has voted on environmental issues mostly in line with other Democrats. (The League of Conservation Voters scored his 2020 votes at a perfect 100 percent.)

But the New Jersey congressman did step on the plans of his party leaders.

Now, he’s doing it again — at a much higher level and against the pressure of almost his entire party. His gambit holds potentially serious implications for climate policy.

Gottheimer is leading a centrist revolt against Democrats’ reconciliation plans, the centerpiece of President Biden’s climate policy. He and eight other Democrats yesterday forced House leaders to set a date for voting on the smaller, bipartisan infrastructure bill that passed the Senate earlier this summer.

Democratic leaders had sought to move the $3.5 trillion party-line bill in tandem with the bipartisan bill, which provides $550 billion in new spending. That would give them leverage against centrists who want to pass the smaller bill but are uncomfortable with the bigger one. Democrats’ razor-thin majorities mean the party needs virtual unanimity.

But Gottheimer didn’t give it to them. He led a group of centrists who refused to proceed on the bigger package until it was divorced from the smaller one. They demanded a vote on the bipartisan bill before allowing reconciliation to move forward.

Leading up to that last-minute agreement, the third-term lawmaker faced a broad onslaught of pressure — including from his home state.

“There’s no reason to wait four, five months or more sitting on this infrastructure package and risking that — or threatening and holding it hostage like some of my colleagues are doing,” he said yesterday on CNN. “That just doesn’t make sense.”

His position isn’t exactly a surprise. He won his seat in 2016 by unseating a Republican, and he has survived in a swing district by crossing the aisle. Gottheimer’s record is even to the right of a few Republicans, according to a GovTrack analysis of the bills he has sponsored.

A co-chair of the bipartisan Problem Solvers Caucus, Gottheimer tried to strike an infrastructure deal earlier this summer when talks between Biden and Senate Republicans hit the rocks. Some in his group floated the idea of financing infrastructure through a carbon tax, but no deal was finalized.

Gottheimer has also shown that he’s willing to clash with Democratic leadership on high-profile issues. In 2019, according to The Intercept, he worked to upend a bipartisan effort to end U.S. support for the Saudi-led war in Yemen. (He eventually supported the measure.)

“A lot of the people I’ve talked to in [his district’s] progressive communities say things like, ‘Well, we gave him leeway on other votes. But he’s really crossed the line here,’” a Garden State Democrat said.