This Fed pick is a climate hero. Will it sink her nomination? 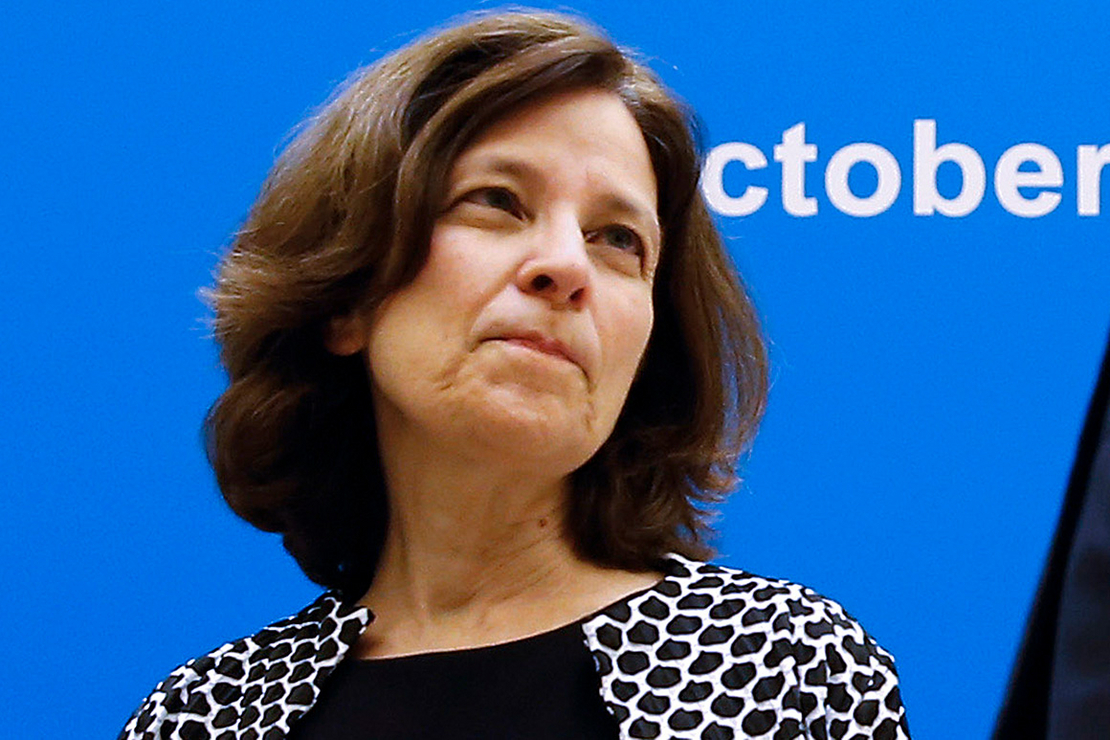 Sarah Bloom Raskin’s nomination to the Federal Reserve is likely to trigger a debate about the role U.S. regulators should play in preparing for the financial impacts of climate change. AP Photo/Andy Wong, File

When former President Obama tapped Sarah Bloom Raskin to join the Federal Reserve in 2010, the appointment went smoothly; the Senate unanimously confirmed her nomination to the world’s most powerful central bank.

But Raskin is unlikely to get the same treatment this time around now that President Biden has nominated her to return to the Fed as its top banking regulator. Senate Democrats and Republicans in recent years have staked out sharply divergent views on the financial threats of climate change — a topic Raskin has unabashedly spoken out on.

At the outset of the Covid-19 pandemic, she warned the Fed against pouring federal dollars into beleaguered oil and gas companies that faced an uncertain future long before the virus circled the globe. And she consistently has called on regulators to use all of the tools at their disposal to ensure the firms they oversee prepare for the realities of a warming world.

Those statements likely will serve as a lightning rod as her nomination moves forward this week.

Republicans, for their part, have warned financial officials against addressing climate issues on the grounds that doing so is inherently political and outside the Fed’s authority.

Democrats, progressive groups and a growing number of financial regulatory experts argue the opposite. On Raskin specifically, they say her climate focus is not only appropriate but necessary, given the solidifying global consensus that rising temperatures pose tangible threats to individual firms and financial systems more broadly.

“To the extent that her confirmation is viewed as a referendum on getting central banks involved in climate-related risks, it’s possible there’s going to be a lot of controversy surrounding that,” said Richard Berner, an Obama-era director of the Treasury Department’s Office of Financial Research. He currently co-directs New York University’s Volatility and Risk Institute.

But ultimately, Berner added, “Ms. Raskin’s outspokenness on climate is completely legitimate because it is an existential threat, and because climate-related shocks do pose threats to financial stability, and to the safety and soundness of financial firms and markets.”

The White House announced earlier this month that Biden would nominate Raskin, 60, to be the Fed’s vice chair for supervision, a role created in the aftermath of the 2007-08 financial crisis to monitor emerging financial risks. Aside from serving on the Fed board, the Harvard Law School graduate also was formerly a deputy Treasury secretary during the Obama administration and Maryland’s top financial regulator. She is married to Rep. Jamie Raskin (D-Md.).

The pick elicited praise from finance experts and progressives who welcomed the news given Raskin’s tenure in government, her reputation as a tough financial regulator, and her leadership on issues including cybersecurity and climate change (Climatewire, Jan. 14).

But the applause wasn’t universal.

Sen. Pat Toomey (R-Pa.), the top Republican on the Senate Committee on Banking, Housing and Urban Affairs, which will vet the nomination, was quick to slam Raskin’s climate record specifically. Toomey said in a statement that he has “serious concerns that she would abuse the Fed’s narrow statutory mandates on monetary policy and banking supervision.”

The U.S. Chamber of Commerce also weighed in. Late last week, the lobbying group wrote a letter to Toomey and Sen. Sherrod Brown of Ohio, the panel’s top Democrat, to flag several of Raskin’s past statements — including on climate risk — that “have raised concerns among the U.S. business community and merit the Committee’s scrutiny.”

Spokespeople for Toomey and several other lawmakers on the committee, including Sens. John Kennedy (R-La.) and Mike Crapo (R-Idaho), declined to comment further on Raskin’s nomination.

Not ‘out of the mainstream’

It’s not the first time Toomey has taken issue with Raskin’s climate record — or those of other nominees who have been outspoken on the topic. Earlier this month, Toomey pressed Fed Governor Lael Brainard on the issue during her own nomination hearing to become the central bank’s vice chair (E&E Daily, Jan. 14).

Toomey asked Brainard about an op-ed from The New York Times that Raskin penned in 2020. In the piece, Raskin criticized the Fed’s move to ensure larger and more indebted companies — including in the oil and gas sector — would be eligible to receive federal investments amid Covid-19 recovery efforts at the request of the Trump administration (Climatewire, May 18, 2020).

The main thrust of her argument was that the U.S. central bank “should not be directing money to further entrench the carbon economy.”

“The decisions the Fed makes on our behalf should build toward a stronger economy with more jobs in innovative industries — not prop up and enrich dying ones,” Raskin wrote.

Toomey wanted to know if Brainard agreed with Raskin, who he accused of urging the Fed to “allocate capital by denying it to this disfavored sector.”

Brainard declined to comment on Raskin’s positions. But she went on to say that while it is not the Fed’s job to tell banks which sectors to do business with, the Fed does have a duty to monitor emerging risks, including from climate change.

Timothy Massad, a research fellow at Harvard University and chair of the Commodity Futures Trading Commission during the Obama administration, echoed that point. While the Covid-19 recovery has demanded unusual levels of economic intervention from the Fed, he said the central bank “doesn’t directly allocate capital as a general matter.”

“I think they’re not looking at the full picture, and we’re living in a very polarized partisan time,” Massad said. “That’s just the reality.”

The majority of Raskin’s other climate positions have revolved around the idea of ensuring individual banks and the financial system are resilient in the face of rising temperatures. During an event in June, for instance, she said the pandemic has revealed underlying vulnerabilities in the U.S. financial system.

“If we take nothing else from the global financial crisis, and from the continuing effects of the pandemic, it should be that our collective well-being of serious disruption from climate change,” she said.

To address that possibility, she argued the United States must prepare the financial system to weather climate impacts — and incentivize a “rapid, orderly and just transition away from high-emission finance and investments.”

In November, Raskin said during an online webinar that finance firms should not be permitted to rely too much on carbon offsets as they work toward their climate goals, and that it would be helpful if companies set and reported their net-zero targets in a standardized format (Climatewire, Nov. 1, 2021).

Most of those positions are generally accepted among experts in the United States and abroad — and are appropriate for an institution charged with monitoring financial stability, regardless of the issue in question, Raskin’s proponents say.

“Her opinions and her positions have not been out of the mainstream. They haven’t been unreasonable,” said Camden Fine, the former CEO of Independent Community Bankers of America, an industry group. Fine and his trade group backed Raskin’s nomination to the Fed in 2010.

To be sure, Raskin has distinguished herself as a bold voice on the issue by arguing that regulators should consider using all the tools at their disposal to mitigate climate-related risks.

That could include examining whether “high-emission assets will require limits in order to keep them from creating unsafe and unsound conditions to the financial institution that holds them,” Raskin said last June. “One can imagine portfolio limits, or concentration limits that assist the financial firm in checking their exposure to potential losses and costs.”

Those ideas in particular are in line with what environmentalists have advocated — but go beyond what current regulators, who’ve focused more on climate risk assessment, have called for.

Even so, Raskin’s proponents say the main thrust of her positions does align with what top financial officials, including Brainard and Fed Chair Jerome Powell, have said in recent months: that climate change poses major financial risks, which means the Fed has a narrow, but important, responsibility to address it.

“Climate change poses significant challenges for the global economy and the financial system. The public rightly expects us to work to ensure the financial system is resilient to climate-related financial risks. We appreciate the magnitude of the challenges ahead of us and the Federal Reserve is committed to doing our part,” Powell said in a statement last October.

“I don’t think at the end of the day her positions are going to be that far from where the Fed has already been moving to,” Massad said.

“I’m sure it will get a lot of attention at the hearings. But at the end of the day, I would expect that she will be confirmed,” he added.

Raskin’s nomination hearing before the Senate Committee on Banking, Housing and Urban Affairs is scheduled for Thursday.