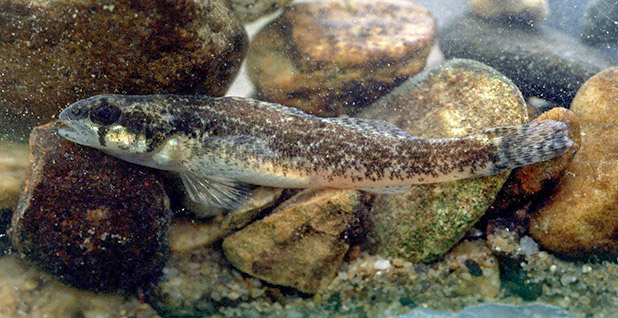 The trispot darter is threatened by development in Alabama, Tennessee and Georgia. Dick Biggins/Fish and Wildlife Service

A Fish and Wildlife Service plan to protect the tiny trispot darter foreshadows larger and louder fights over the agency’s moves on other threatened species.

During a subdued public comment period that ends today, the Fish and Wildlife Service has floated its plan that protects the fish, but not with the same inevitable severity as if it were listed as endangered instead of threatened under the ESA.

Instead, through what’s called a 4(d) rule, the agency has carved out exemptions that will allow certain silvicultural, streambank management and other measures to continue even if they result in a "take" of the fish that maxes out at about 1.6 inches.

"Although these management activities may result in some minimal level of harm or temporary disturbance to the trispot darter, overall, these activities benefit the subspecies by contributing to conservation and recovery," FWS stated.

So far, the public seems cool with that.

Unlike other ESA actions, including a broader 4(d) proposal that has incited fiery rhetoric and thousands of comments, the proposal for the trispot darter fish drew 11 comments as of today.

A related proposal designating about 181 river miles and 16,735 acres in the Coosa River system in Alabama, Georgia and Tennessee as critical habitat drew 24 comments.

"We commend the [FWS] for proposing a critical habitat rule that recognizes the importance of sustainable forest management and the conservation contributions that private forest owners make every day," declared Gretchen Lech, manager for policy and engagement for the Hancock Natural Resource Group.

Hancock describes itself as the world’s largest manager of timberland investments for private equity investors and manages about 4 million acres of working forests across the United States.

Scientists consider habitat degradation to be the most serious threat to the darter’s future viability, with water quality and quantity problems "exacerbated by the effects of climate change," according to FWS.

The agency’s apparently uncontroversial proposal for a 4(d) rule for the trispot darter comes as the Trump administration plans for more of the same.

Section 4(d) of the law allows the agency to set special regulations for threatened species. In 1978, FWS used this authority to extend the prohibition of take to all threatened species. This "blanket 4(d) rule" essentially assigns threatened and endangered species the same protection. This blanket rule can be modified by a species-specific 4(d) rule.

Last year, FWS proposed getting rid of the blanket 4(d) rule altogether (Greenwire, July 20, 2018). "No two species are the same, and so by crafting species-specific 4(d) rules for threatened species, we can tailor appropriate protections using best available science according to each species’ biological needs," said Greg Sheehan, then the agency’s principal deputy director.

Tens of thousands of mostly critical public comments swamped FWS in response to the broader 4(d) proposal, which along with other ESA proposed changes remains a work in progress.

"Please do not rescind the Section 4(d) blanket rule," a commenter identified as Teresa Dix urged. "Species that are imperiled enough to be threatened should continue to receive full protections so that their status does not deteriorate even further."