This House Dem’s itching to grab the Science gavel 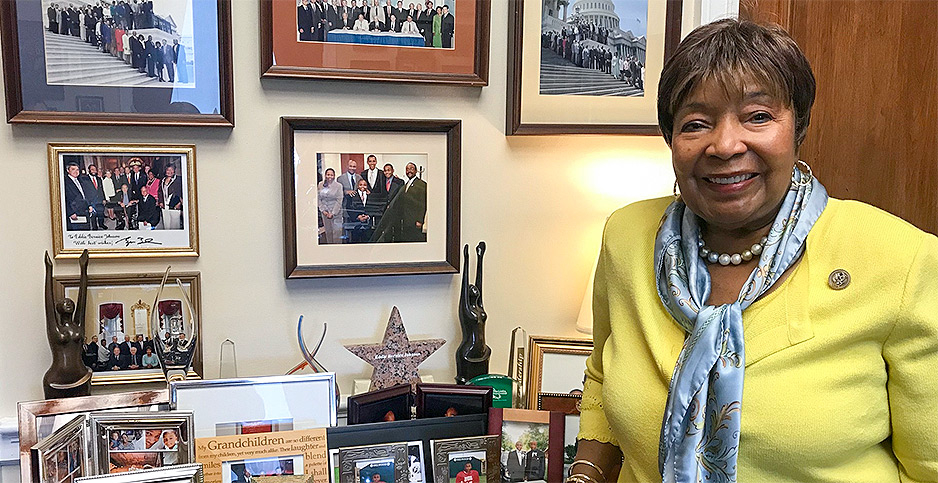 The House Science, Space and Technology Committee’s top Democrat is weary of the panel chairman using his gavel to undermine climate science.

And if her party takes back the House in November, Texas Rep. Eddie Bernice Johnson promises a sharp turn away from the agenda of her fellow Texan, Chairman Lamar Smith (R).

"To hear some educated leader who is chairman of a key committee espousing some doubt [about climate science], it’s not only ignorant, but it’s also unfair to the public," Johnson said in an interview from her Capitol Hill office this week.

"Without research, we might as well close the door to the future," she said.

A member of the science panel for 25 years, Johnson said she was floored to hear Alabama Republican Rep. Mo Brooks argue at a hearing in May that rocks tumbling into the ocean are causing the seas to rise.

Despite those policy difference, Johnson maintains she has a good relationship with her Republican counterparts, including Smith, who recently announced he’s retiring. And Johnson, 82, is still plotting her political future. She recently won her primary in the Lone Star State’s solid blue 30th congressional district. She’s running for her 14th term in the seat she’s held since 1993.

The congresswoman recently sat down with E&E News to discuss her work on the committee and the public’s trust in science:

(Laughs) I don’t know. I’ve been so puzzled by a lot of things.

I do think he is influenced a great deal by his staff because some of the people with the institutional knowledge, most of them who have worked on that committee for years, are just gone. And many of the people he’s hired have come from [California Republican Rep. Darrell] Issa’s old investigative committee. It just seems like it’s an expedition to weed out knowledge or to avoid accepting what the facts might be.

And what about Pruitt?

Pruitt has had such a textbook amount of activities that shows he does not respect some of the findings we’ve had. He does not respect the EPA, and I think that he might feel it might just be an embarrassment. I mean, it would be to me. If I had someone holding that key position in my party and espousing some of the things he’s done, which gets to be almost illegal, or may be illegal, I would be careful, too, about bringing him before the committee. He’s likely to get some really serious questions that he might be reluctant to answer.

Do you have a good personal relationship with Smith?

We get along fine. I ask him direct questions sometimes and express my disagreement on issues, which he accepts pretty well. It’s at times very frustrating, but also when you come to understand that’s where the person is going to be and no matter what you do, it’s not going to change, you just have to ignore that and move on, believe in what you believe and try to keep pushing in that direction.

I’ve had quite a few private conservations with members of the Republican Party that don’t agree with what the leadership is espousing, but they’re not in there to just be disagreeable with him.

On the other hand, I can remember when one of the members was asked what he thought was causing the bodies of water to be full, was it because of the climate warming and more water is melting. His response was, well, he thinks more rocks are falling and causing the splash and whatever.

That just sounds pretty stupid for an adult educated person.

How do you respond to that?

You have no way, really, to challenge to the point where they’ll change their mind. What you have to realize is they really stretched it to reinforce the way they would like to think.

I learned a long time ago, everybody’s entitled to their own opinion and I can’t agree with everybody. They have as much right to have their opinion as I have to mine, except on this. I think mine is based on facts that have been researched and concluded and no longer doubted.

How would you lead the committee if Democrats take back the House?

I would try to continue course based upon science, and one thing I think I’d focus on is not defunding scientific exploration. We’ve got to continue research where we have gained the knowledge that we have. I’ve been pretty concerned about some of the directions we’re taking with research. Defunding, moving things around because we disagree.

I would try very hard to be above board, to move strategically in a position where we’ve already learned the science and also try to be influential in saying how much more we need to learn. How we got here. We didn’t get here by somebody waking up one morning and guessing that exploring the universe would just be fun. We got to understand and appreciate what comes from that kind of research, and we need to accept that without new research, we stall life. We stall where we are in the total society.

We are spending less than most countries now on research, and I don’t know whether it’s because we fear the unknown or fear learning something or fear discovering something you don’t agree with. I am mindful of cost, but I do think that there are some things that are essential that you invest in, and research is one of those.

Has faith in federal science been irreparably harmed in the climate fight?

I think, generally speaking, the public still acknowledges and believes in scientific research and exploration. I also believe there’s a group of people that are very vulnerable to hearing questions about the legitimacy of science.

This era of eliminating immunizations, for example, the only time you hear that is from uneducated people that have learned or understood the reason for immunizations. I was shocked to see it was in the platform of the Texas Republican Party to stop encouraging immunizations. Anyone with any degree of intelligence knows that a lot of communicable diseases have been controlled through immunizations.

How should Democrats respond?

Do you see any parallels in the fight for civil rights and climate change?

Well, it’s really shocking to me that intelligent people continue to deny it. In terms of the civil rights movement, what you experience and what I’ve experienced and what you tend to focus on is solving the problem so you don’t back off. You might take a few steps backward, but you never give up. It’s clear to me we’re experiencing climate change, and it’s backed up by science, but it’s still not acknowledged, and a lot of times it’s because there’s a fear of change.

You don’t run from it, you try to figure out ways to approach it, make the changes and move on. It’s been frustrating to deal with a group of people that don’t even want it mentioned, climate change, when we’re experiencing it every day.

Our family was very close-knit. My father wanted to be a businessperson. He would tell us about working on what is Interstate 35 now, from Temple to Waco, making $1 a day in addition to trying to get his tailor and trucking business going. My mother was a homemaker, a cook, periodically cooked cakes and pies for churches.

When I was almost 8 years old, I had another sister born, and then when I was 16 years old, I had a brother born. We had always listened to our parents about being close, looking out for each other, so we grew up very close, even though we were spaced. In November, I lost that sister. In January, I lost that brother, which was the youngest and the only boy. So just the two older girls and I were left.

In 1990, you told the Chicago Tribune, "Being a woman and being black is perhaps a double handicap. When you see who’s in the huddle, who’s making the important decisions it’s men." Do you feel still feel that way?

I think it’s changed some. But I think there’s still reaches from the past, that sometimes various professions where I’ve been able to hear more about it and run into it most is women in STEM, engineering, programs like that. … It’s felt there is discrimination against women especially if they’re child-bearing age.