This inventor hopes to make solar arrays work in blackouts 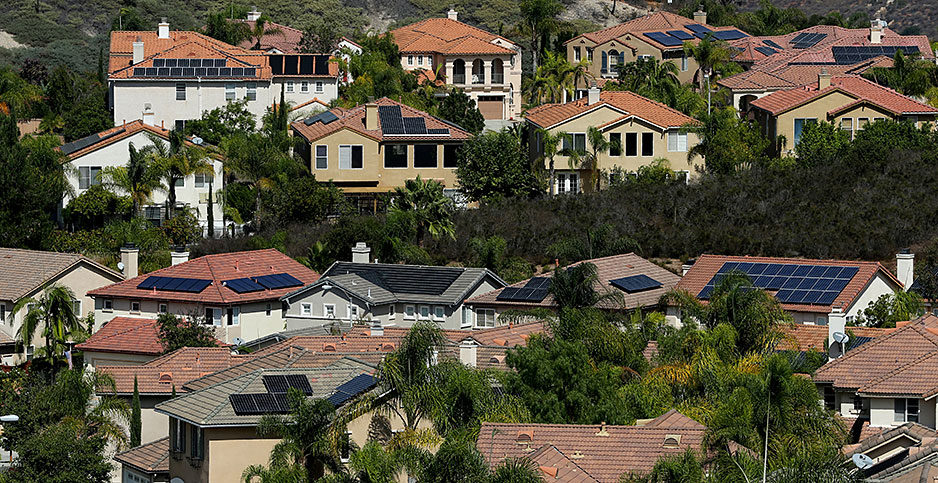 Homes with solar panels in San Diego. Many homeowners were surprised their solar arrays were shut off during blackouts. Mike Blake/Reuters/Newscom

The wildfires that roared across California over the last two years prompted surprise among homeowners with solar arrays: Why was their power failing during blackouts?

Those questions put a spotlight on a problem that Eric Cummings, an inventor, had been thinking about for years. He is a former Department of Energy laboratory scientist who was hoping that somebody else would make a device to fix this mess.

"Do I really want to spend my kid’s college tuition on an idea we haven’t proved out? Investors aren’t really interested in an idea that’s still in the conceptual phase," Cummings said in an interview.

He pointed out that new electrical equipment requires substantial and usually expensive laboratory testing before they can be certified. The process can take two to three years. That’s a lot to ask of Cummings and his small business in Livermore, Calif., called Maxout Renewables.

But the uproar that followed what utility officials called "public safety power shutoffs" sent Cummings back to his drawing board.

He saw a new market: There are 2 million homes in the United States that have rooftop solar arrays. Ninety-five percent of them aren’t backed up by $10,000 battery systems that would be required to turn on solar arrays and keep them running during a power outage.

Solar-powered homes in Puerto Rico and Florida, which are more prone to hurricanes, face similar blackout risks. California had estimated that it would cost each customer as much as $15,000 to put the state’s power lines underground.

Cummings suspected that there was a much cheaper fix. Solar arrays are governed by software devices called inverters that shut them down when they receive signals that the regional power grid has been disrupted.

He sketched out a device he called "Evergrid," which is slightly larger than a microwave oven. It has a small battery that powers a flywheel to create the same voltage and frequency signals that would be delivered by a power line.

"It’s sort of like fake it until you make it," explained Cummings. "Once the flywheel is spun up and synchronized, then basically it is a grid."

Depending on the size of a home’s solar array, Cummings felt the device could at least keep refrigerators, freezers and some other appliances running during the daytime. He calculated it would cost customers around $1,000.

Then came a bigger question: Who would pay to develop and test Evergrid?

In 2017, the Trump administration launched the "American-Made Challenges" program, which supports innovations in industries where the United States lags behind foreign competitors. So far, it has paid out $18 million in cash prizes to startups and offered testing help from DOE laboratories.

The first contest focused on solar energy. Although solar cells that can make electricity were first introduced to the world in 1954 by three scientists working at Bell Laboratories, they had remained an exotic plaything for scientists for almost a half-century because of their expense and inefficiency.

The first prototypes extracted only 1% of the potential energy in sunlight. That restricted their first uses to spacecraft where the government prized their light weight, but private investors were not even lukewarm about solar.

The National Renewable Energy Laboratory (NREL) was designated as part of DOE to help develop and promote solar electricity in 1991. It produced a study in 2003 titled "Bridging the Valley of Death."

While the U.S. government had spent billions developing solar power for the future, many private investors hadn’t connected the dots. "These two groups have only a vague understanding of what drives each other — thus creating a chasm between the two worlds and a formidable gulf that entrepreneurs must navigate on their own," the study noted.

In 2008, China further complicated the solar industry by pouring an estimated $20 billion investment into the market. Many analysts believe the move was part of a global effort to dominate future solar energy innovations.

The move helped drop the global price of solar-powered electricity from $76 per watt in 1977 to 20 cents per watt in 2020, but it also created at least seven Chinese solar companies that are now larger than many international competitors (Climatewire, Dec. 16, 2019).

So in late 2019, when Cummings pondered whether to proceed with Evergrid, he had three choices. He could wait for someone else to capitalize an invention. He could navigate the "Valley of Death" on his own. Or he could go up against 160 competitors lining up for round three of the American-Made Challenges solar contest.

He rejected his temptation to let someone else fill the solar gap, and he remained doubtful about approaching private investors with just an idea.

So he entered the contest.

It has three phases. They’re called "Ready," "Set" and "Go." Cummings won $50,000 in the first phase by showing he had a good idea that could help advance the U.S. solar industry. Then he won "Set" by putting together a prototype. That gave him $100,000 plus vouchers that would cover testing costs at DOE laboratories.

Finally, he was one of two winners of the "Go" phase, which awarded each of them $500,000 plus vouchers to cover more testing and for showing they could attract partners to help with the final development of the prototype.

The co-winner of the final round was a team of young graduates of Georgia Tech who had developed hardware and tools to increase the efficiency of new solar power systems.

Both teams, according to DOE, "had highly disruptive and impactful ideas that addressed gaps in the solar market."

The solar contest, now in its fourth year, is designed to attract new players. "We’re looking for people who are tinkering in their garages," said Debbie Brodt-Giles, NREL’s program manager for the contest. "We want to get people to enter who are normally not part of the solar industry."

As for Cummings, he is about a month away from pitching Evergrid to companies that can manufacture and sell it. He is pleased that the contest helped him do the preparation and testing he needed in one year when it probably could have taken two or three.

But there is still a long, long way to go. As of 2019, only 3.1% of U.S. electricity was generated by solar power, although it has become the fastest-growing electricity source in the country, according to the Solar Energy Industries Association.

Future power scenarios predicted by DOE, based on economic models, show that by 2050, between half and two-thirds of U.S. electricity will likely come from solar and wind power. The cleaner, cheaper power will reach more industrial sectors, fuel automobiles and heat buildings.

The remaining power will come from natural gas. By then, according to DOE, nuclear power and coal-fired electricity will have been almost totally phased out.

Cummings says this means that about 90% of the work in developing renewable energy technologies remains to be done. His dream has been that more U.S. solar manufacturers will emerge to become major players.

"And I actually have a lot more hope now, going forward, that we’re going to be able to do that than I’ve had in many years," he said.

"We would actually be selling things again. That’s the prize. I think that should appeal to conservatives and liberals. There’s no downside to this," Cummings added.