This is America’s riskiest place for wildfires 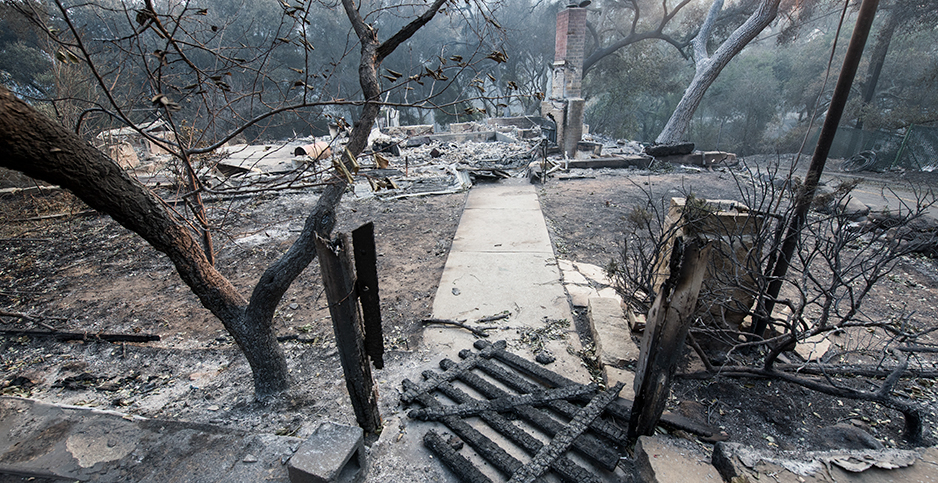 People are flocking to fire-prone areas, according to researchers. A chimney is seen in the remains of a burned house after the Thomas Fire in California in 2017. Brian Ferguson/Air Force/Forest Service/Flickr

Placer County, Calif., is a postcard place of picturesque parks and trails, quaint towns and wineries, high-elevation lakes, and ski resorts in the Sierra Nevada.

It also faces the nation’s greatest wildfire risk, according to an analysis based on computer modeling.

Much of the rising risk nationwide is attributable to development and population growth on the outer fringes of cities and in more remote areas, experts say.

"There are many reasons people continue to run into the fire. Whether pushed to the periphery by affordability concerns or pulled there by the value of space … many are attracted to more rural areas for affordable options outside of large- or medium-sized cities with job availability," said Skylar Olsen, economic adviser to the San Francisco-based analytics firm ClimateCheck, which conducted the analysis.

"But more growth in these areas won’t stop wildfires," she added. "Building into the wildland-urban interface will put more homes and people at risk."

The analysis shows that 17 counties — mostly in California, Idaho, Utah and Washington state — face the nation’s greatest wildfire risk, scoring 90 or higher on a 100-point risk index scale. More than half of those counties experienced population growth between 2013 and 2018.

Placer County, stretching from the eastern exurbs of Sacramento to Lake Tahoe, faces the highest wildfire risk of any county in the U.S., with an index score of 98. Placer County saw nearly 7% population growth over the five-year study period, adding more than 24,000 people and 3,200 homes.

Weber County added nearly 14,000 residents (5.9% growth) from 2013 to 2018, pushing its wildfire risk index to 97, while Chelan County, centered on the Okanogan-Wenatchee National Forest, added 2,700 people to a much smaller base, netting a 98 wildfire risk score.

Among large metro areas, Salt Lake City faces the highest wildfire risk, with a cluster of four counties, including Weber, Morgan, Summit and Salt Lake, landing near the top of the risk index. Those counties combined saw a 10% population boom between 2013 and 2018.

Experts say the rankings are the first to calculate wildfire risk at such a granular scale, with outcomes dependent on multiple factors, including geography, climate, vegetation and growth patterns. In addition to county-level population and housing growth, the index relies on modeling of acreage expected to burn annually per county through 2050.

That number can vary widely based on conditions, experts say, with some acreage-burned estimates of well over 100,000 acres in densely forested areas of Northern California and Oregon, and as few as 5,300 acres in Minidoka County, Idaho, where the landscape is drier and more scrubby.

Wildfire risk can also vary within a county depending on local landscapes and microclimates. In Orange County, Calif., for example, wildfire risk is markedly higher in San Clemente (89 on the index) compared to Laguna Beach, where the risk level is only 22.

"In general, the more remote the area — like forests or dry canyons — the greater the risk of wildfire. More developed areas without vegetation don’t have the fuel to burn, but the more the wildland-urban interface is blurred, the more likely housing is to be in the midst of wildfire risk," the report states.

Scientists predict that wildfires will become more frequent and more intense under climate warming conditions due to elevations in temperature and the squeezing of moisture from the atmosphere, along with repeated cycles of drought that kill large trees and shrubs. Fire suppression policies are also a major contributor to wildfire risk in many forested areas, as is development pressure on once-remote counties consumed by urban sprawl.

Daniel Swain, a climate scientist at UCLA, said wildland-urban interface problems are acute in California, where high property values and scarcity of developable land is pushing more people outside cities into areas with elevated fire risk.

So, too, are decades of fire suppression that has allowed flammable surface vegetation to spread. But, he added, climate change "is even more important because it acts on top of those things in a pervasive way."

"The truth is many of the fires in the West are not forest fires because they’re not burning in a forest," Swain said. "Climate change is … relevant everywhere, whether it’s forest, grasslands, your backyard or other open spaces. Even if there were nothing else going on with respect to population and development, we’re still going to see an increase in the severity and likelihood of catastrophic fires."

Chris Gray-Garcia, a spokesman for Placer County, said officials had not read the ClimateCheck analysis naming it as the nation’s No. 1 county for wildfire risk. In an email, he said wildfire dynamics can vary widely across the county with higher risk in more remote areas far east of Sacramento.

He said state and local officials are placing "extensive resources on the ground" to aid in wildfire prevention and response and that residents in wildfire-prone areas are working collectively to reduce risk in their neighborhoods.

"With wildfire danger increasing throughout the West we recognize that living with wildfire is part of our future, but we are as prepared as any community to address and adapt to that risk and will continue to prioritize the safety of our residents, natural resources and infrastructure," Gray-Garcia said.