‘This is not a survivable market.’ Insurance crisis hits Fla. 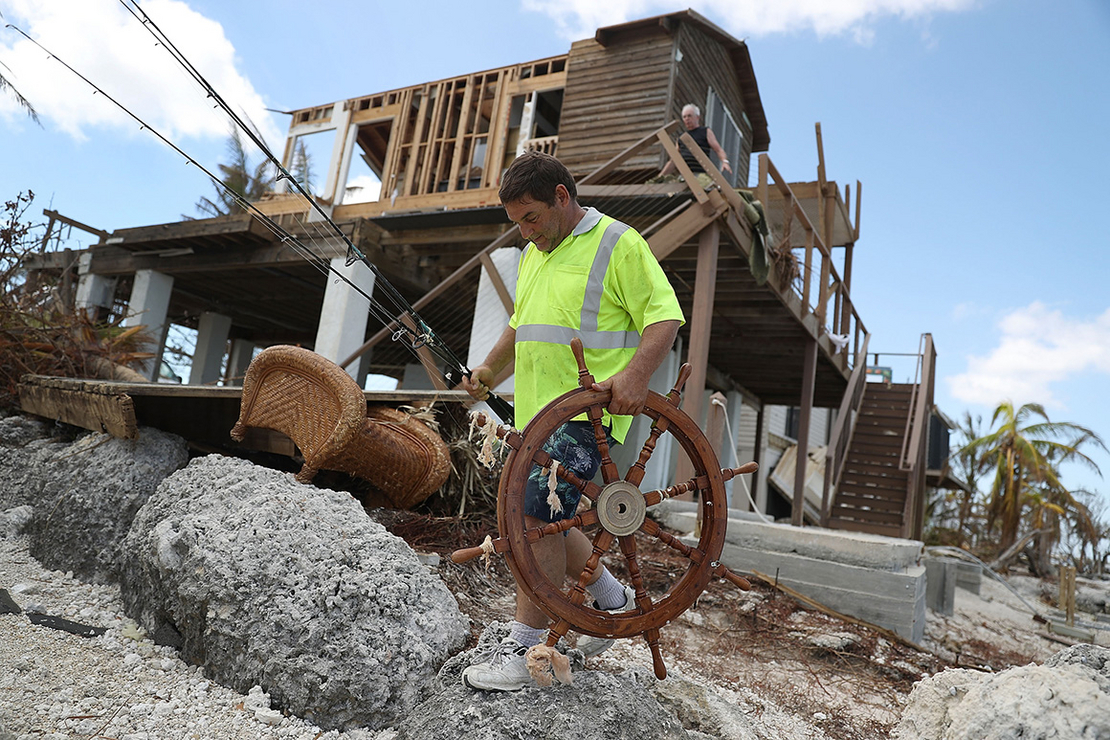 Claude Scee is pictured salvaging what he can from his father-in-law’s home in Summerland Key, Fla., after it was wrecked in 2017 by Hurricane Irma. Joe Raedle/Getty Images

Three years ago, FedNat Insurance Co. decided it was smart business strategy to expand deeper into the South to diversify its coverage area.

But in 2020 and 2021, major storms hit Louisiana and Texas, and the Florida-based property insurer lost tens of millions of dollars.

Now the impact of those storms is being felt in Florida. On June 29, FedNat will cancel 68,200 homeowners’ policies in the state.

FedNat’s pullback is the latest in a stunning series of insurance cancellations, nonrenewals and company liquidations that have left Florida residents struggling to find coverage at the start of a hurricane season that is projected to be unusually strong. Premiums are soaring, and experts say an insurance crisis threatens the state economy.

“This is not a survivable market. Homeowners cannot find coverage,” Mark Friedlander, spokesperson for the Insurance Information Institute, said in a recent webinar. The webinar, hosted by credit rating agency AM Best, was about a Florida insurance market “in crisis.”

The retrenchment has forced hundreds of thousands of Florida residents to get coverage through the state insurer of last resort, Citizens Property Insurance Corp. The influx raises fears that a major hurricane would drain program reserves and require millions of residents to pay an insurance surcharge.

Citizens’ policy count hit 883,000 in May. That’s more than double the 420,000 policies the program had three years ago, but well short of its record of 1.5 million policies in November 2011. The growth has accelerated in the past year and is expected to continue, undermining Citizens’ long effort to “depopulate” by moving policyholders to private-sector insurance.

“This is one of those stories that, unfortunately, the news is not getting better,” Kelly Booten, Citizens’ chief operating officer, told an advisory committee meeting on June 8. “We are continuing to grow as companies are shedding policies or temporarily shutting down.”

Citizens’ financial exposure has nearly tripled to $294 billion from $107 billion in May 2019, as private insurers target pricey homes for cancellation or nonrenewal.

Nearly half of Citizens’ exposure — $141 billion — is in the three hurricane-prone southeast counties of Broward, Miami-Dade and Palm Beach, even though those counties account for just 28 percent of Florida’s population.

“Citizens is growing at a clip that is not sustainable,” Kyle Ulrich, president of the Florida Association of Insurance Agents, said at the recent AM Best webinar.

He noted that five Florida property insurers have been declared insolvent since April.

“Citizens’ policy count,” he said, “is widely seen as an indicator of the health of the underlying marketplace.”

Homeowners and renters who still have private insurance in Florida are facing rate increases of 30 percent to 100 percent, and premiums that are becoming costlier than their mortgage payments, Friedlander said.

“Floridians are paying the highest average premium in the country,” Friedlander said. “Homeowners can’t afford to pay this premium. They’re going to be forced to sell their properties.”

The Treasury Department’s Federal Advisory Committee on Insurance is studying “the potential for major disruptions” in coverage in U.S. regions “that are particularly vulnerable to climate impacts,” according to a committee presentation this month.

In California, after wildfires in 2017 and 2018 caused property insurers to lose $20 billion, insurers raised rates and canceled, or opted not to renew, hundreds of thousands of policies in high-risk areas, according to state figures and a new Congressional Budget Office report. State Insurance Commissioner Ricardo Lara has imposed a series of moratoriums barring insurers from dropping policies in wildfire-prone areas.

In Louisiana, FedNat and other insurers have recently announced the cancellation of tens of thousands of policies as they struggle to pay claims from Hurricane Ida, a devastating Category 4 storm that caused tens of billions of dollars of damage in the state in August.

Florida’s insurance crisis is driven by factors that are complex and unique to the state: an insurance market dominated by small, local companies; a legal system that insurers say invites lawsuits challenging claims awards; and vast exposure to the effects of climate change.

One of the nation’s fastest-growing states, Florida’s development has boomed in coastal areas that are vulnerable to hurricanes and flooding. Three-quarters of Florida’s 21.5 million residents live in a coastal county, according to the latest Census Bureau figures.

Florida insurers cover wind damage and other perils except for flooding, which is covered through separate policies that are usually underwritten by the federal government’s flood insurance program.

The insurance pullback has occurred mostly in the past two years, a period in which Florida has been spared any major hurricane. The timing has led some people — including Florida lawmakers — to minimize the significance of disasters and climate change and focus on issues such as insurance fraud and fees for lawyers who sue insurers.

“Florida’s property insurance crisis is a man-made disaster, not a natural disaster,” Friedlander of the insurance institute said, pointing to the absence of major hurricanes in recent years.

Although Florida’s last major hurricane occurred in 2018, the state has nonetheless experienced a series of minor hurricanes and tropical storms, such as Elsa and Fred last year, as well as unnamed storms, wildfires and other events.

A report last month by AM Best found that “the greater frequency of secondary perils” in Florida — such as severe thunderstorms, hail and wind storms — contributed to the insurance crisis.

And although Florida was spared 2020’s Hurricane Laura and other recent major U.S. storms, the state’s last two major hurricanes were devastating and helped trigger the insurance crisis.

Hurricane Michael, a Category 5 storm, demolished the state’s panhandle in 2018. Hurricane Irma in 2017 damaged the entire state and is listed by NOAA as the nation’s sixth-costliest disaster since 1980.

Irma and Michael “caused a profound amount of damage within the state that left insurers with substantial losses,” Chris Draghi of AM Best said at the recent insurance webinar. Draghi calculated that from 2017 through 2021, Florida property insurers lost a total of $3.2 billion.

Florida-based insurers such as FedNat began writing homeowners’ policies in other states right as they were hit with major storms. The company expanded in Louisiana as the state was hit by Laura in 2020 and Ida in 2021, and in Texas as the state sustained major damage and power outages from the 2021 winter storm.

FedNat said in a financial statement in November 2021 that its geographic expansion “was well-intended” but coincided with “the unprecedented number of catastrophe weather events that affected Texas and Louisiana over the past 15 months.”

Insurers recouped some losses through their reinsurance policies, which pay a share of catastrophic claims. But those payments prompted reinsurance companies to raise their rates sharply, leaving some primary insurers without the excess-loss coverage the state requires.

Southern Fidelity Insurance Co., which insures 78,000 properties in Florida, was declared insolvent by the Florida Office of Insurance Regulation on June 9, after its reinsurance coverage expired and new coverage “was not accomplished,” according to a recent order.

Southern Fidelity’s losses occurred even though it raised rates last year by an average of 84.5 percent and dropped 19,000 policies that were generating excessive claims.

Reinsurance is especially important in Florida, where the property insurance market is dominated by local insurers that are too small to accumulate reserves that can cover catastrophic losses.

The market is a legacy of Hurricane Andrew, the notorious Category 5 that devastated the state in 1992 and led large national insurers such as Allstate Corp. and State Farm Insurance to stop or scale back coverage of homes in Florida.

“You have a bunch of small companies that are heavily reliant on reinsurance and not diversified,” Nyce said.

After 2005, when hurricanes Katrina, Rita and Wilma slammed Florida, the state did not have another major hurricane until 2017. That extraordinary period let insurers lower their rates and buy reinsurance easily.

“That lack of storms hid how fragile the market was,” Nyce said.

The insurance crisis grew so perilous that Gov. Ron DeSantis called a special session of the state Legislature in May to consider measures to strengthen the insurance market.

DeSantis, a Republican, worked with the Republican-controlled Legislature to enact laws dealing with insurance fraud, legal fees and reinsurance, but analysts doubt they will solve the insurance crisis.

“Property insurers will continue to face financial hardships in the near term,” AM Best wrote after the legislative session. “Many primary carriers who depend on reinsurance still face an existential challenge.”

“The problem is any of these reforms are going to take time because they’re not retroactive,” said Handerhan, the consumer advocate. “The Legislature had an opportunity to do some other reforms that would have provided an immediate rate impact for consumers, but they didn’t.”