‘This is only the beginning’ as storm slams into Carolinas 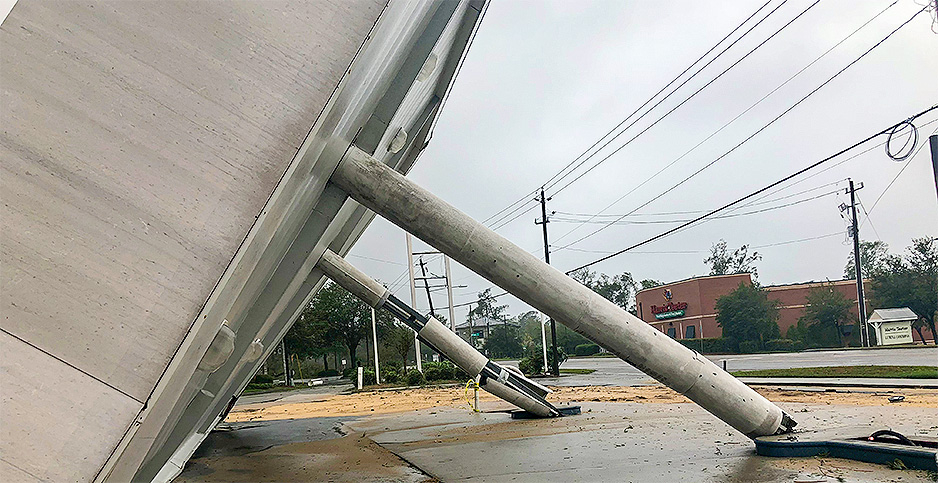 WILMINGTON, N.C. — A gray sunrise awoke the coast here this morning, offering residents a dim light to replace the electricity that might not return for weeks.

Shortly after 7 a.m., the wind and rain slackened and then stopped as the storm’s eye passed over the barrier islands before arriving in this city of just over 100,000 people — a port town usually filled with the buzz of restaurants, galleries and shops.

By 8 a.m., the rain was again falling sideways as winds gusted up to 90 mph, according to local broadcasts. It snapped some trees in half. Others were torn from the ground, exposing root systems the size of hot tubs.

Near the shore, a treetop with branches thick as legs had collapsed over a house. A pickup pulled into the driveway, and the man who emerged into the wind flashed a thumbs-down.

Farther inland, an empty gas station’s canopy toppled over. Signs had blown away, and awnings had crumpled. But most buildings seemed OK, and those with large parking lots had emergency vehicles idling or waiting in formation.

Two police cruisers guarded the bridge into Wrightsville Beach, the barrier island under mandatory evacuation orders. Nearby, a beige port-a-potty had been strapped to the ground.

Officials today warned of freshwater flooding that could turn streets into streams and storm surge that could plague the coastline through the weekend.

They also said the area will get as much rain in three days as Hurricanes Dennis and Floyd dropped over two weeks in 1999, but said they’re anticipating no operational problems with federal dams throughout Virginia and North Carolina.

"This is only the beginning," said Chris Wamsley, an official with the National Weather Service. "Florence is a very slow mover and will continue to trek along the North Carolina and South Carolina coastline for the next 24 to 36 hours."

The storm has already knocked out power to half a million homes and businesses, and rescue workers had to pull more than 60 people from a collapsing motel. Hundreds more had to be rescued from rising waters, but there were no immediate reports of deaths.

Even with no power, the threat of electrocution is everywhere in Wilmington. Along the shore, downed power lines brushed the tops of reeds before dipping beneath them to a heap of broken wood and transformers resting in the water.

More alarming than the downed power lines were the ones still partially attached to poles, whipping in the wind and thwacking into passing vehicles.

The city is dark but not empty. News vans, jeeps and a few luxury cars passed through intersections without working traffic lights.

The rain was light enough that a few people emerged to snap pictures. Next to the road, two teenagers walked hand in hand wearing drenched clothes.

They’re all crazy or not too bright, said Hannah Simmons,
a 40-year-old who’s lived on the coast her whole life.

"I’m worried because I’m seeing people walk up and down the roads. They don’t realize the storm is not over with," she said.

Florence is forecast to linger over the area for days, bringing potentially deadly floods. Researchers say climate change has made these types of storms worse by loading them with more moisture.

That’s a message that people have heard on the coast, Simmons said. People near the water have always been sensitive to the ecosystem, and climate change fits easily into that mindset, she said.

"You hear someone’s accent and you automatically think redneck, but I don’t think that’s true. People are conscious about where they live at," said Simmons.

More than 350 miles north in Washington, D.C., lawmakers huddled to discuss a funding package for hurricane relief, though it appears unlikely it will get done before the end of the fiscal year Sept. 30.

North Carolina Republican Sen. Thom Tillis said this week that lawmakers from affected states have already started cobbling together a supplemental funding proposal and are hoping to push it through "very quickly" (E&E Daily, Sept. 13).

But a House GOP aide said Congress wouldn’t need to pass a supplemental for hurricane and wildfire aid before the end of the fiscal year because the Federal Emergency Management Agency already has $25.6 billion in its disaster emergency relief fund. She said that money can go toward any federally declared disaster.

Pelosi also suggested FEMA’s disaster coffers should be able to hold up in the short term, especially if Congress is able to pass its appropriations bills by the end of the month.

However, FEMA and its parent agency, the Department of Homeland Security, could be covered by a stopgap measure until December, with lawmakers preferring to hold off on fights over President Trump’s border wall until after the midterm elections.

Back in Wilmington, Mayor Bill Saffo said during an interview broadcast over local radio and television that he talked with the president yesterday, as well as Tillis and Gov. Roy Cooper (D).

The outpouring of nationwide support has been overwhelming, he said, and Wilmington’s going to need it. "It breaks your heart, because we put so much effort and time into making this city look good," he said.

"This city’s been around for over 275 years. … In the end, we’ll come back and be more resilient than ever," said the mayor.

Aton reported from Wilmington, N.C., and Northey from Washington. Reporters Nick Sobczyk and George Cahlink and the Associated Press contributed.