This is what a climate emergency declaration looks like 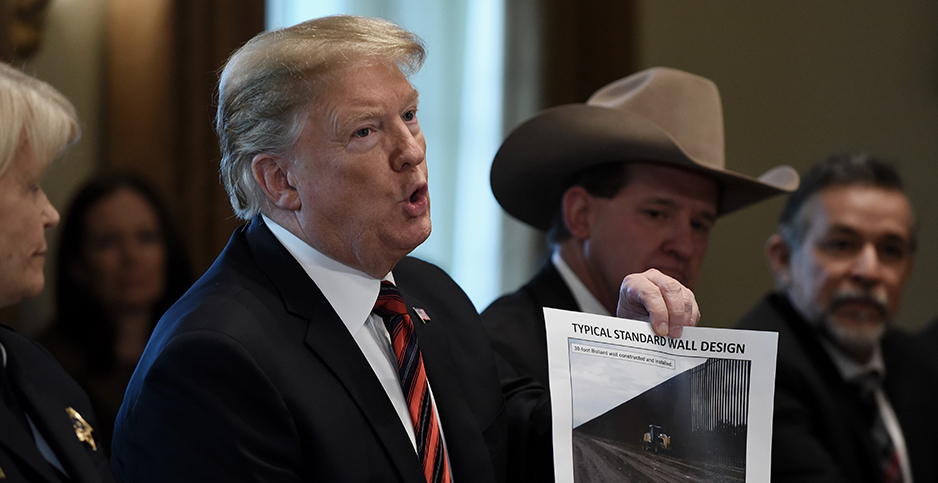 President Trump is again weighing whether to declare a national emergency on immigration, and it’s prodding some Democratic lawmakers and environmentalists to ponder a similar declaration on climate change.

Much of the discussion is academic — as few believe that Trump’s desire to circumvent Congress to build a border wall is constitutional.

But there’s a touch of seriousness too, given the dire predictions for the United States and the rest of the world if global warming goes unchecked.

"It seems far-fetched now, but [it could happen] if we go down the slippery slope of using national emergencies to achieve the political ends of an administration," said Francesco Femia, co-founder of the Center for Climate and Security.

With the disclaimer that he thought it was a bad idea, Femia said there might be an opening for an emergency declaration on climate change if a future president faced a series of climate-fueled ecological disasters.

"It would only be invoked if you were talking about major direct impact on the United States from multiple storms, one after another, coinciding with major wildfires … all happening in a short span of time, all happening with a high degree of certainty of climatic changes," said Femia, whose nonpartisan group advocates for policies that combat climate change and the security risks that go along with it.

In that scenario, he could see a future White House taking steps to nationalize large parts of the energy industry in an effort to reduce carbon emissions. It’s a move, he added, that could lead to the replacement or closure of power plants that emit the most carbon, such as those that run on coal.

Another possibility: the forced removal of people who live in high-risk areas, such as floodplains or the coasts, Femia added.

That said, "in a plausible science-fiction scenario, this would probably get struck down by the courts," he added. "We don’t want to enter a world like that where the United States has to make these kinds of decisions."

Rep. Ro Khanna (D-Calif.), who has been a big advocate for climate legislation such as a "Green New Deal," was similarly skeptical of an emergency declaration — though he’s previously said that the U.S. needs to treat climate change like a national security threat.

"A Democratic president … will be very reluctant to call a national emergency because they’ve actually read the case law and care about the Constitution," he said. "If Elizabeth Warren is president, having taught at law, there’s no way she’s going to usurp the Constitution."

Instead, Khanna said the best way forward would be the passage of climate legislation in Congress, which he said would require Democratic majorities and enough allied Republicans, such as Rep. Brian Fitzpatrick (R-Pa.).

But there are major hurdles there too. Rep. Kathy Castor (D-Fla.), who is set to lead a new House committee on climate change, acknowledged the limitations.

"The problem is the Congress is terrible at addressing long-term threats," she said. "So here’s this building emergency when it comes to the climate that’s impacting us every day and it’s costing us more and more every day, and the Congress [has trouble focusing] outside a week’s time [or] a month’s time."

Even so, a national emergency would be a stretch, she added.

"Clearly, we’re approaching an emergency when it comes to climate," Castor said. "But there are certain legal parameters for how you designate a national emergency."

In the past few months, major scientific reports like the National Climate Assessment have shown that global warming poses a serious threat to Americans and that it could exacerbate refugee crises around the world. This week, Daniel Coats, director of national intelligence, warned lawmakers that global warming is a national security threat.

"Global environmental and ecological degradation, as well as climate change, are likely to fuel competition for resources, economic distress, and social discontent through 2019 and beyond," said an analysis that Coats presented to lawmakers at a hearing with the Senate Select Committee on Intelligence.

If Trump declares a national emergency for immigration, that could create a never-before-used pathway for similar assertions in the future, legal observers noted.

The National Emergencies Act, enacted in 1976, leaves it up to the president to define what constitutes an "emergency." It has been used by presidents more than 40 times in the past, 30 of which remain in effect.

Those that are still active include a number of terrorism provisions, measures that block sales of goods to hostile countries and sanctions against Russian election hacking. If Trump issues a declaration to fulfill a political promise, it would break established conventions related to national emergencies, which are often apolitical.

For weeks, Democrats and Republicans have warned that such a move could politicize emergency declarations in the future.

Rubio’s concern is not unwarranted. In the past few weeks, Democrats have countered Trump’s drumbeat about violent migrants by suggesting that climate change was the real emergency.

"The scientists tell us that if we don’t combat climate change aggressively, the severe damage done to our country and planet will be irreversible. Now that’s a ‘crisis,’" Sen. Bernie Sanders (I-Vt.) tweeted.

"Instead of declaring a national emergency to address a fictional emergency — @realDonaldTrump needs to stop denying a real one: climate change," tweeted former Secretary of State John Kerry.

Those are more than political slogans. They might signal future actions by Democrats. If Trump declares an emergency and it survives legal challenges, which is possible, Democrats would have a clear avenue created for them to address their concerns, according to Dan Farber, a law professor at the University of California, Berkeley.

"Anything goes," he said.

If Republicans are willing to use the power for a policy priority, such as immigration, then Democrats could feel emboldened — and legally justified — to do the same.

"If Trump creates a precedent, I’m sure there will be a temptation to use it," Farber wrote in an email. "I think the strongest argument for calling climate an emergency is that only recently has it become clear what a short window of time we have in order to stabilize the climate, especially if we’re going to be anywhere in the ballpark of the Paris Agreement climate targets. Moreover, it’s important for us to take action in order to encourage other countries to do so, also within a relatively short time frame if we want to have maximum effect."

A future Democratic president could use a declaration in a few ways.

The National Emergencies Act gives the president the ability to shore up industrial shortfalls, which could be used to expand access to clean energy, Farber said.

That could include an expansion of battery and electric vehicle production as well as loan guarantees for the renewable energy industry, he noted. Restrictions could be placed on automakers to reduce greenhouse gas emissions from vehicles. And the president could invoke the International Emergency Economic Powers Act to address "any unusual and extraordinary threat," such as companies and foreign countries that sell fossil fuels, Farber said.

"If the courts do uphold him, there would seem to be a very strong argument for upholding similar use of emergency powers to address climate change," he said. "In effect, even more so, because the climate problem is getting worse while border crossings have trended down."