This is when the GOP turned away from climate policy 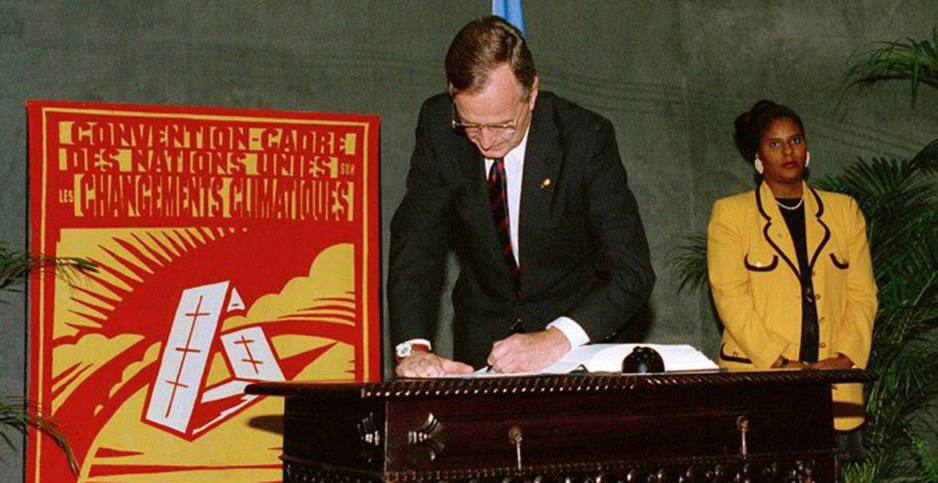 At the start of the George H.W. Bush presidency, the Republican Party fretted about the dangers of climate change. By the end, it was focused on doubt and inaction.

Since then, the party has drifted further away from the conclusion of scientists and from policies to address global warming.

Bush embraced climate science in the 1980s and campaigned on protecting Americans from its dangers.

"Those who think we are powerless to do anything about the greenhouse effect forget about the ‘White House effect,’" Bush said in a 1988 campaign speech. "As president, I intend to do something about it."

But as soon as Bush got into office, the administration started to work against meaningful policy on climate change, observers say, even as it crafted strong positions on air pollution to defeat the threat of acid rain.

After his decision on the Clean Air Act amendments, Bush had to be "dragged kicking and screaming" to international climate talks and ceded a chance to make meaningful policy at a time when the world had not yet politicized climate science, said Michael Oppenheimer, a Princeton University geosciences professor who attended some of the early climate talks as an observer.

The Bush presidency was a "debate over denialism in microcosm," said Jerry Taylor, president of the Niskanen Center and a former climate skeptic who now works to convince conservatives about the dangers of climate change.

Conservatives around the world, including former British Prime Minister Margaret Thatcher, were worried about climate change and looking for policy solutions. Instead, skeptical forces grew stronger, pushed by Washington-based think tanks such as the Cato Institute and the Competitive Enterprise Institute. While Bush ignored those groups on acid rain, he acquiesced on climate change.

"The GOP during the Bush presidency pivoted from a position of being torn on how to respond to climate change," Taylor said. "This issue could have gone either way, but we know which way it went. The party could have been on climate change where the party is on acid rain, which is accepting it as a real thing and with some responsibility for a government response and total peace with the decision."

Bush aides wanted to establish the administration as having strong environmental credentials, topping the leaders of England, Canada and France in advance of an economic summit held in July 1989. In a State Department memo that has been declassified, the agency recommended that the United States focus on policies that would reduce greenhouse gas emissions, including supporting nuclear power.

"The theme which runs through these proposals, and which I recommend the President stress, is that of wise, active stewardship over the resources of our planet," a State Department official wrote. "This is a responsibility we have to ourselves and as our legacy to future generations. Every man, woman and child can make a meaningful contribution to carrying out this responsibility. This approach links individual responsibility with national and international responsibility."

Bush used his presidency to foster stewardship in minor ways.

He continued work already underway at the Council on Environmental Quality and the White House science and technology office. And he created the Environment and Conservation Challenge Awards — a program to highlight environmental protection and generate "environmental awareness" — and a recycling network for federal agencies, which hadn’t existed before.

While Richard Schmalensee, an economic adviser to Bush, described climate change in a 1990 memo as a theory, the president had already warned of its dangers.

Before reaching the White House, he stumped before a crowd on the banks of Lake Erie in southeast Michigan, where he said he would make climate change a centerpiece of his administration.

"In my first year in office, I will convene a global conference on the environment at the White House," Bush said at the Lake Erie Metropark in 1988, adding that he would invite the Chinese, the Soviets and officials from emerging economies.

Months earlier, James Hansen, a NASA scientist, had testified before a Senate committee that the Earth was warming and that humans were the reason.

In his remarks in Michigan, Bush appeared to reference that testimony.

"1988 is the year the Earth spoke back," Bush said. "Our land, water and soil support a remarkable range of human activities. But they can only take so much. We must remember to treat them not as a given, but as a gift."

As then-President Obama argued on a 2015 trip to the Everglades, Bush came from a period when addressing environmental threats — climate change included — was bipartisan in America.

"George H.W. Bush was the first president, globally, to acknowledge the impacts of climate change and that we needed to do something about it," Obama said. "This is not something that historically should be a partisan issue."

In the spring of 1990, Bush did hold a White House summit on the science and economics of "global change" — climate change — a fact he highlighted in a letter the next year to Congress.

The White House wrote in the letter that scientists at the time warned that temperatures could rise "10 to 50 times faster than anything in recorded history" if humans continued to burn fossil fuels.

Still, the administration underscored uncertainties in the science, specifically over sources of greenhouse gases, sea-level rise, and connections between power plants and carbon emissions.

Despite Bush’s endorsement of Hansen’s work on the campaign trail, his administration would later interfere in the public presentation of that research. In 1989, Hansen complained that the Bush administration’s Office of Management and Budget toned down the severity of his conclusions before they were delivered to a Senate committee headed by then-Sen. Al Gore (D-Tenn.). That move would foretell later efforts by the administration of President George W. Bush to water down conclusions by climate scientists before they were publicized.

Sununu was more interested in those who rejected the emerging climate science, including a number of researchers who have continued to battle against consensus science today. Some of them, including Pat Michaels of the Cato Institute, continue to have influence in the Trump administration and have encouraged the rollback of climate protections. Sununu ran his own rudimentary climate models and said that scientists were wrong.

Still, Hansen said Bush pushed forward with the U.N. Framework Convention on Climate Change, which was a meaningful step forward at the time, and one that President Clinton and the younger Bush neglected to push ahead on.

"The Framework Convention on Climate Change, the product of Rio in 1992, was exactly the right response to all that was revealed in the 1980s," Hansen said in an interview yesterday. "The elder Bush deserves much credit for that. He was being pushed in a very bad direction by the elder Sununu, a real jackass from my perspective as a scientist."

Bush showed hints of taking climate action again near the end of his presidency. But he punted.

Bush was immersed in a tough campaign, which he would ultimately lose, when he bucked members of his party and spoke at the Earth Summit in 1992 in Rio de Janeiro. Bush said he had come with a climate plan in hand. It would focus on energy efficiency, forestry, new technologies and clean air.

He signed an agreement to create a "framework convention on climate change" — the U.N. body that would go on to become the UNFCCC.

"I invite my colleagues from the industrialized world to join in a prompt start on the convention’s implementation," Bush said. "Let us join in translating the words spoken here into concrete action to protect the planet."

Bush pledged environmental funding to poorer nations. "We come to Rio recognizing that the developing countries must play a role in protecting the global environment but will need assistance in pursuing these cleaner growth," he said.

But then, his administration did little to follow through with those pledges or to fight for something more concrete than a framework. In the end, Bush balked at the most meaningful part of the Rio gathering — setting specific emissions reduction targets.

It turns out Bush was correct. The models showing warming have been borne out, and the problem has worsened, as Hansen predicted. According to the most recent version of the National Climate Assessment, the models may have underpredicted the worst effects. This year and the past three have been the warmest in recorded human history.

So, for all his talk, Bush’s climate legacy is that he walked away from pushing a policy that would restrict greenhouse gases at the very moment that the top scientists in the world were saying it posed a crisis for humanity, said Oppenheimer, the Princeton professor.

The resulting void was filled with political fights that have worsened under the Trump administration.

"The real shame is that we saw this coming and we had a chance to get ahead of the impacts of climate change before they manifest themselves, and we just didn’t do it," Oppenheimer said.