This lawyer’s fighting to protect the ESA. Will it work? 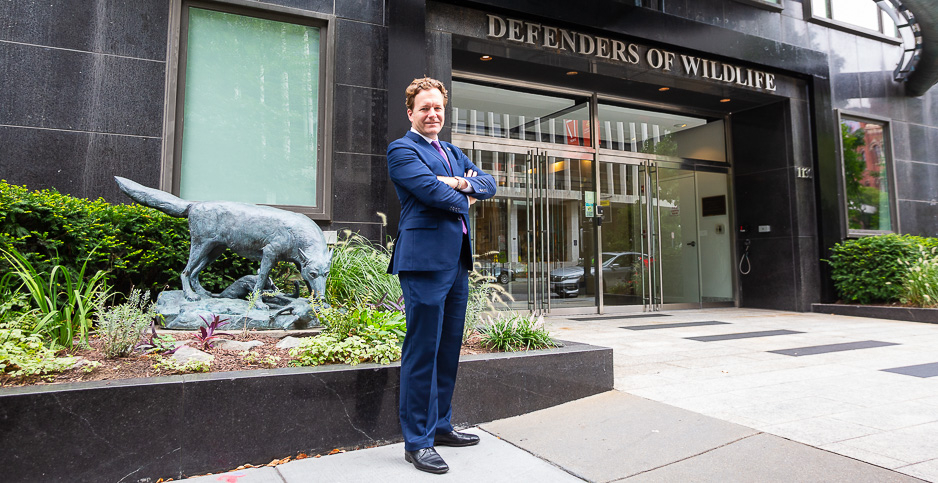 Jason Rylander, a senior staff attorney at Defenders of Wildlife, poses outside of the organization's headquarters in Washington, D.C., Aug. 28, 2019. Francis Chung/E&E News

Fast-forward to today, and the 47-year-old is a lawyer at Defenders of Wildlife, where he’s helping to sue the Trump administration regarding suggested revisions to the Endangered Species Act.

"It is critically important at this moment that we at least hold the line against this administration’s attacks on our future," Rylander said in a recent interview. "I feel like we’re the last line of defense."

A native of Yonkers, N.Y., Rylander obtained a bachelor’s degree from Cornell University. He then worked as an environmental journalist for four years before attending William & Mary Law School.

You’re now representing environmental groups in a lawsuit against the Trump administration over its proposed Endangered Species Act revisions. Why are you bringing this case?

Well, we’re one of seven environmental groups that has filed suit against the administrative rollbacks of the Endangered Species Act regulations, and the lawsuit’s being led by Earthjustice. We’re bringing this case because we’re very concerned this suite of changes does nothing to improve the conservation of species and will, in fact, harm prospects for recovering species going forward.

We also think certain revisions are simply contrary to the intent of the Endangered Species Act, such as changes to the critical habitat provisions and the injection of economics into the listing process. So we think those revisions can be challenged on their face because they violate Congress’ intent.

You worked on the Endangered Species Act in the early ’90s. Do you have déjà vu today?

Yes. One of the things about the Endangered Species Act is that it has repeatedly survived attacks over the course of its lifetime. Through the ’90s and 2000s, there have been many efforts to rewrite the act, and all of them have failed in Congress. And you tend to see the same themes over and over again. You know, some of the Trump administration’s proposals are a little bit different than what we’ve seen in the past, but some of them are part and parcel with the kinds of efforts we’ve seen to weaken the law to benefit extractive industries and reduce protections for species.

Do you have faith in this Congress to push back on the Trump administration’s efforts to rewrite the act?

Well, the oversight power is very important. There may be some opportunities in Congress to roll back some of these regulations. And hopefully in the future, we’ll have a conservation majority that will help enable us to make actually positive changes for endangered species and for environmental protection generally.

Quite a few. One of them is a challenge to the administration’s reinterpretation of the Migratory Bird Treaty Act. I also have litigation pending to try to get the administration to list the lesser prairie chicken as threatened or endangered under the ESA. And I expect to launch litigation that will seek protections for the dunes sagebrush lizard.

We also, of course, have ongoing litigation about the administration’s environmental waivers for the border wall. And we’re very concerned about drilling in the Arctic National Wildlife Refuge and the potential impacts on species like polar bears and ringed seals, not to mention the climate impact of continuing to damage our public lands for fossil fuel extraction.

Yes. When I first came to Washington in the early ’90s, I was looking for any kind of job I could find in the environmental field. And the first offer I got was a journalism fellowship writing for Land Letter, a publication for natural resources professionals. I stayed there for four years, and it was bought by E&E News shortly after I left. And of course Land Letter no longer exists today.

It was great. It was before the 24-hour news cycle. At that point, Land Letter was published every two weeks in hard copy and mailed out to readers. And we still considered it current [laughs]. So I’m starting to date myself.

[Laughs] No, that’s just a random assortment of plushies that I’ve inherited.

You know, there are so many, and it tends to be the one I’m working on at the time. But I think I’m gonna go with the piping plover. There’s one up there on that little cabinet.

In my other life, I’m actually an opera singer. I sing classical tenor, and I perform regularly with groups like the Washington Bach Consort and for various ensembles around the country — mostly regionally. So that’s been a big part of my life. I try to balance out my day job with lots of music.

I’ve recently taken up landscape painting. I had a painting in a show in Richmond, Va., last year that was sponsored by the Sierra Club. It was a show about the environment at risk, and I did a painting related to the pipeline devastation that’s going on in Virginia. So the arts are a really big part of my life as well.