This man dives into hurricane bottoms with a Coyote 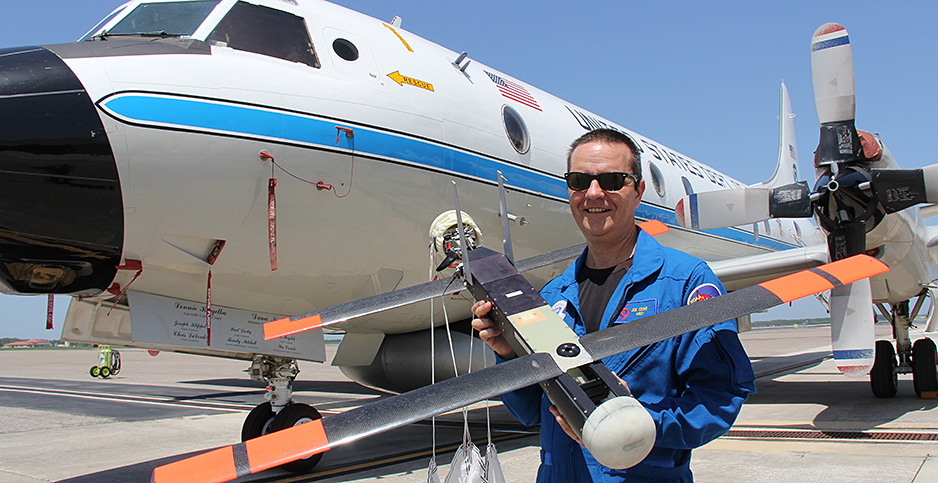 In 2004, a meteorologist accepted one of the most difficult challenges of weather-related science: exploring the churning bottom of hurricanes before they strike land.

These dangerous places just above seawater were a no-go area when Joseph Cione of NOAA entered the field.

The winds there include updrafts, downdrafts and sideways drafts, often right next to each other. They can reach 194 miles an hour; that’s enough force to tear a conventional aircraft apart.

Recent research underlines the urgency of knowing more about these puzzling places. One study done by a team of Chinese and U.S. scientists last year calculated that the top 6,500 feet of ocean water has accumulated more than 90% of the heat contributed by human-caused climate change. Record temperatures have been registered there during each of the last five years.

Rising levels of heat and moisture from the ocean increase the destructive power of tropical storms as they swirl over them.

A separate study concluded that storms reach peak intensity as they near land. Their range is extending both north and south from the equator (Climatewire, Jan. 29). Hurricanes last year caused billions of dollars of damage in the United States alone.

But exactly what happens at the base of the storms remains a mystery.

In one of Cione’s first attempts to measure their power, he analyzed data from NOAA’s sensor-equipped buoys. They were an iffy proposition set out with a hope that hurricanes would blow over them.

"Either the storm hits there, or it doesn’t," Cione explained in an interview.

The next tool he and other scientists used is called a dropsonde, a small collection of sensors packed in a tube that is parachuted from hurricane hunter aircraft at 10,000 feet into storms. They could gather some snapshots of data in the minute or two before they hit the ocean.

NOAA still finds them useful, but for this research, Cione needed a whole movie, not a fleeting snippet.

Next, he tried a gasoline-powered drone, a small, unmanned aircraft obtained from Australia. He managed to guide it through a hurricane and out the other side. He did that twice with skillful navigation, but it was expensive and too difficult to use on a routine basis.

"I decided there had to be an easier way," he said.

Then he discovered that the U.S. military was developing a 3-foot-long electric-powered drone called the Coyote. It was in part a response to the Russians’ new surface-to-air missile system called the Pantsir-S1. On a battlefield, the missiles could threaten helicopter gunships.

The Coyote, built by Raytheon, a defense and space contractor, took advantage of the rapid development of computerized sensors. The Army used the drone to pinpoint Russian missile sites, which could be attacked later by gunships. The Navy was developing its own version of the drone, which it could drop from a patrolling P-3 Orion anti-submarine aircraft.

NOAA worked with Raytheon to develop a different version of the Coyote that could be fired with a standard launching tube from the P-3 aircraft, which NOAA uses to hunt hurricanes. After the P-3 enters a storm’s eye, it launches the drone, which is slowed by a parachute as it sprouts folding wings and then a propeller.

Cione planned to carefully guide the Coyote on a downward spiral along the outside wall of the circular eye to study the structure of storms and the strength of winds at the boundaries of the eye. Eventually, he hoped to steer it to the bottom.

NOAA used seven Coyotes to scout two powerful hurricanes: Maria in 2017 and Michael in 2018. He managed to get the first detailed and continuous data of the strength and directions of wind turbulence along with the temperature, air pressure and humidity below 500 feet in both storms.

"The findings were fantastic. They improved the understanding of conditions within the lower part of the storm," Cione said.

But the Coyote’s batteries ran out after an hour, not leaving him enough time to measure what was happening at the base of the storm, where it made contact with the ocean.

In 2018, NOAA found several companies that were interested in expanding the data collecting capabilities of lightweight drones.

One of them, Area-I, a Georgia company, agreed to adapt an Army version of the Coyote called Altius-600, with an almost four-hour range, to operate in tropical cyclones.

"We want to do more eye loitering," said Cione, to get second-by-second changes in the data.

By going on a counterclockwise downward spiral near the boundaries of a storm’s eye, he estimates, the drone should go deeper and not risk damage by flying directly against the major forces of the storm.

The drone’s greater battery power will also allow the P-3 to move farther away from a hurricane to avoid playing what Cione called the part of a nervous "chaperone" that must stay close to the storm to keep recording its steady stream of storm data.

NOAA recently tested the Altius-600 at Naval Air Station Patuxent River in Maryland, and Cione believes it will be ready by summer, when the next hurricanes begin to appear off the U.S. coast.

One of those storms will probably give Cione his next trip into the eye of a hurricane. His hope is to get enough data to inform NOAA’s computer models and provide its weather forecasters with a more complete picture of what a storm’s forces can do to buildings and homes in its path. That could help authorities decide which areas to evacuate first.

Then there’s the adventure part of the mission, which Cione looks forward to.

As the P-3 aircraft approaches the eye of a storm, at 10,000 feet, it must fight alternating high gusts of wind that push it up, then down, then laterally. The meteorologist compares it to a "roller-coaster ride."

There is silence except for the hum of the P-3’s engines. The strapped-in crew members can see the sun shining peacefully above. If they look down, they can see white. It’s foam from the ocean waves being ripped apart by superstrong gusts.

"You see this patch of white, and to you at that height, it looks like a speck," Cione said.

Unlike the eerie still life in the storm’s eye, the crew can see the ocean moving. There is more information to be had at the very bottom, Cione predicted.

"The ocean has a memory."