This man may steer environmental law under Trump 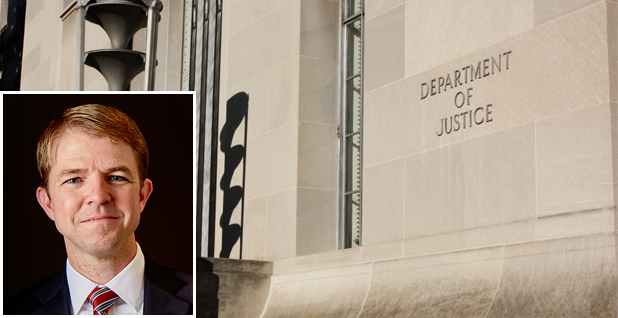 LOS ANGELES — President Trump’s rhetoric has left many of the nation’s top environmental lawyers wondering what will come of the Justice Department’s environmental arm under his administration.

DOJ’s Environment and Natural Resources Division prosecutes polluters who violate the nation’s bedrock laws and defends regulations from U.S. EPA, the Interior Department and others.

At the American Bar Association’s annual conference here last month, many questioned whether either of those responsibilities was a priority for the administration.

Scott Fulton of the nonpartisan Environmental Law Institute noted that Trump’s budget proposal would have not only slashed EPA’s budget by a third, but also cut 45 percent of state grants — a major source of funding for state-led environmental enforcement.

"How do we look at what’s being brought forward in the budget in a way that is not fundamentally anti-enforcement in character?" asked Fulton, who has worked in both Democratic and Republican administrations.

All eyes have turned to Jeffrey Wood, whom Trump has appointed as acting attorney general for ENRD until the Senate confirms a yet-to-be-named nominee.

Wood, in his first interview since being sworn in 15 minutes after the president on Jan. 20, told E&E News that he will seek to carry on the division’s work.

"Clean air and clean water remain a high priority," Wood said. "Our responsibility at the Justice Department — while recognizing that there are changes in priorities and changes in focus — will be to continue to enforce the law."

At 37, Wood is a newcomer to ENRD, succeeding John Cruden, who had two decades of experience at DOJ and was widely regarded as one of the country’s foremost environmental law experts (Greenwire, March 24, 2015).

He is a former lobbyist for Southern Co., the giant Atlanta-based utility, having de-registered three days before being sworn in at DOJ. He also represented 205 members of Congress in filing an amicus brief supporting the legal challenge to the Obama administration’s Clean Power Plan, which required states to develop and put in place plans to lower carbon dioxide emissions from existing power plants.

And Wood has written critically of environmental laws in the past, calling the Endangered Species Act a "Trojan horse" for overreaching federal regulation in a 2006 paper he co-authored that was highlighted by the conservative Federalist Society.

All of this has led many attorneys to question ENRD’s future under Trump.

Peter Hsiao, a leading environmental attorney with the firm Morrison Foerster in Los Angeles, said the administration’s stated objective to re-evaluate environmental policies, including turning more issues over to states, "comes with its own set of environmental challenges."

"When you move to reorder environmental standards, the role of the Department of Justice is to be nonpolitical and offer its own legal advice," he said.

"What will happen in this administration? We’ll have to wait and see."

He said he worked for Southern Co. during his time at Balch & Bingham, the Alabama-based law firm where he has worked on two occasions.

According to Wood, most of his work with Southern related not to coal but to nuclear power. As a company, Southern has been shifting away from coal. The fuel source once represented nearly three-quarters of the company’s power generation but is now down to about a third. Wood lobbied on issues such as "spent nuclear fuel" and the "development of new nuclear power plants," according to lobbying disclosure forms (Energywire, Jan. 30).

"I’ve been a very big supporter of the idea of nuclear power and was very proud of that work," Wood said.

Upon joining DOJ, Wood met with the department’s ethics lawyers, who advised that he should recuse himself from Clean Power Plan litigation. As a result, Wood has not participated in any of the Trump administration’s recent actions in the case, including the government’s recent motion to put it on pause while EPA reconsiders the rule.

He’ll also recuse himself from several other high-profile cases, he said, due to either his previous work or that of Balch & Bingham, to avoid the appearance of a conflict of interest.

"The ethics opinion I got was pretty long," Wood said, "and they laid out the matters for which they think I should be recused, and I’ve abided by that."

From Florida State to Capitol Hill

When Sessions was confirmed as attorney general, Wood was one of six former staffers the Alabamian brought with him to DOJ.

"I really had no plans of actually ending up in Washington," Wood said, "but I meet a lot of people through various circumstances who find themselves in D.C."

As a child, though, Wood attended middle school in Waldorf, Md., outside of Washington, when his father was stationed at Andrews Air Force Base, before going to high school and college near Jacksonville, Fla. He also spent time growing up in California, Texas and Georgia.

It was in Maryland that Wood says he "got bit by the political and legal bug." And it was during his first job while an undergraduate at Florida State University that he became interested in environmental law.

Wood also earned his law degree from Florida State, where he graduated in the top 5 percent of his class. Former professors said Wood was an "exceptionally strong student" and a "very careful legal writer."

After law school, Wood headed to Balch & Bingham in Birmingham, Ala., where he worked on clean air, clean water, endangered species and nuclear energy. After four years, he relocated to Nashville, Tenn., to become an in-house counsel at Ingram Barge Co., the country’s largest inland waterways company.

In 2011, Wood arrived on Capitol Hill for a job as an energy aide to Sessions, who was on the Senate Environment and Public Works Committee. There, Wood worked on the RESTORE Act, legislation that allocated penalties and funds following the Deepwater Horizon oil spill.

J.B. Ruhl, a former Florida State professor who is now co-director of Vanderbilt Law School’s Energy, Environment and Land Use Program, said Wood wrote a paper in his environmental law seminar that was "one of the best I’d seen the whole time at FSU."

The paper, according to Ruhl, anticipated several arguments that would be made in the coming years over the application of the Constitution’s Commerce Clause to the Endangered Species Act.

Wood has remained fascinated by the relationship between the Commerce Clause and environmental laws.

In 2006, he co-wrote a paper that called the Endangered Species Act a "modern-day Trojan horse" that has led to greatly expanded federal regulation of "a wide range of commercial and noncommercial activities."

The paper then went on to outline Commerce Clause challenges to prohibitions on the take of ESA-listed species. The contention goes like this: The government lacks the authority under the Commerce Clause — which governs interstate economic activity — to regulate the take of a species that exists within only one state, and has little, if any, commercial impact.

Almost all such lawsuits have been unsuccessful. Just last month, the 10th U.S. Circuit Court of Appeals in Denver rejected another property owner’s challenge to regulations involving the Utah prairie dog (Greenwire, March 29).

But Wood’s paper goes one step further, suggesting it may be possible to bring such a case against the actual listing of a species, not just take prohibitions.

When asked about the paper, Wood stepped back from the "Trojan horse" language. But he did emphasize that he supports a limited role of federal government in environmental issues and that ENRD under his watch would stick strictly to the laws as they are written.

He described himself as a "rule-of-law conservative" who believes that legal analyses begin "No. 1, with the Constitution and No. 2, with the statutes — not as I would want them to be written but as they are written and passed by Congress."

"We don’t want to use enforcement, for example, as the means by which we regulate in a way that’s not clearly authorized by Congress," he said. "I tend to be mindful of the limits of federal jurisdiction."

And he said that applies to the ESA.

"You see this conflict come out a lot in the West," Wood said. "I’ve already heard a lot in this role about concerns about how the Endangered Species Act applies to a whole host of Western lands issues, and we’re going to continue to take a close look at that."

Still, Wood noted that DOJ last month filed a brief in the Supreme Court asking justices to reject a case challenging the Obama administration’s critical habitat for polar bears. The DOJ brief criticized arguments made by Alaska and the oil and gas industry that the habitat designation was "overly burdensome" (Greenwire, March 29).

Wood has also written about the relationship of the Commerce Clause to federal regulation under the Clean Water Act — a topic that the Trump administration is revisiting under an executive order to revise the Obama administration’s Clean Water Rule.

He pointed to the Supreme Court’s 2001 decision in Solid Waste Agency of Northern Cook County v. Army Corps of Engineers, which struck down federal jurisdiction of isolated ponds in the Chicago area that periodically served as bird habitat.

The Commerce Clause ran through that challenge to the Army Corps’ belief it has jurisdiction to regulate those wetlands, though the court ultimately sidestepped that issue and ruled against federal jurisdiction under the migratory bird rule.

"Even though it dealt only with the issue of the migratory bird rule, it resurrected this issue of what is a waters of the United States," Wood said. "I really appreciate what the court has struggled with in trying to answer the question of what did Congress intend when defining the scope of the Clean Water Act as waters of the U.S."

Wood said that since being sworn in, he has sought the counsel of former ENRD chiefs, including Cruden.

Cruden said in an email that he has met with Wood and he is "clearly a bright, energetic, knowledgeable attorney."

But he added that he does "not know enough about what Jeff is doing professional to comment on his performance."

Wood said he has been getting up to speed on the 6,900 cases and matters on ENRD’s docket and getting to know its 400 attorneys.

He repeatedly praised their work, and sources inside ENRD said Wood has taken steps to reach out to career staff.

Wood said he is hoping to continue the traditions of the division.

"We have the same objectives basically, which is to fulfill our legal duty to vigorously enforce the laws of the United States," Wood said.