This park superintendent braces for another shutdown 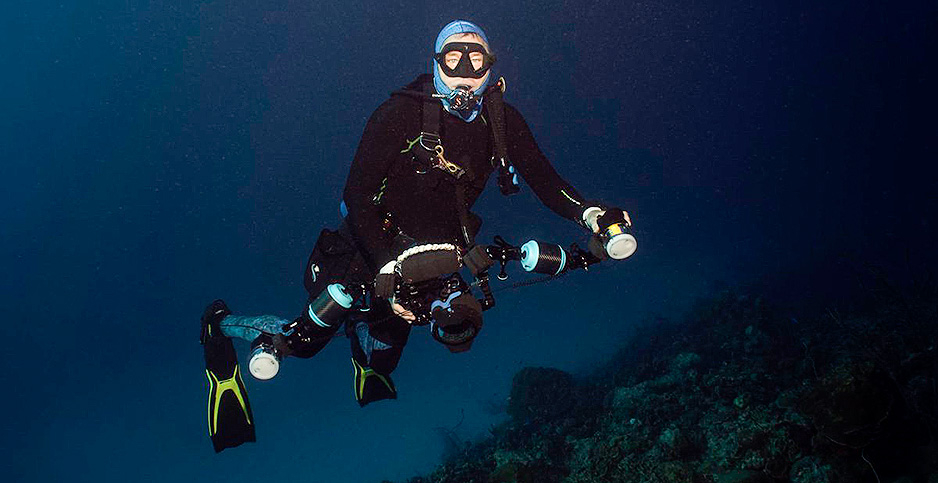 Just not when the federal government is closed.

The soft-spoken leader says the partial government shutdown threw a wrench into his planning for the summer, when half a million visitors flock to Glacier Bay on cruise ships.

"We have the cruise industry here, and we partner with them. We have rangers on all of the ships," Hooge said in a recent interview.

"Our ability to give those programs for half a million people was in jeopardy," he said. "So we feel like the shutdown ended in the nick of time."

Like most national parks, Glacier Bay remained open during the shutdown. But nearly 60 employees were furloughed, and many of them struggled to get by without paychecks. Morale took a serious blow.

An avid scuba diver and underwater photographer, Hooge worked for 15 years as a marine biologist before becoming a manager at Alaska’s Denali National Park and later the superintendent at Glacier Bay.

The 60-year-old father of two recently spoke with E&E News from his office in Alaska about the difficulties of the shutdown, the joys of being a superintendent and what comes next:

How did the partial shutdown affect Glacier Bay?

Here at Glacier Bay, we were definitely lucky on timing. We have an intense summer season and a light winter season.

But it definitely had an effect on employees here and their basic health and welfare in terms of paying bills. It also threatened our ability to hire more people for the summer. It was going to be difficult or impossible to hire enough staff for the summer programs, which attract half a million people to the park.

How many Glacier Bay employees were furloughed?

In the winter, we have about 60 employees. Almost all of them were furloughed. At any one point in time, there were only a few people working. Just a few rangers and maintenance workers.

Yes. Right now, there’s a significant morale hit. There’s stress and worry. We have a very dedicated workforce that really believes in this park, but I do hear folks saying they’re not sure whether they want to continue to work.

Will that affect recruitment in the long term?

We may have long-term recruiting issues. We have our challenges recruiting here in Alaska. I mean, it’s a beautiful location. But we require a highly skilled workforce to be able to do this type of activity. And we’ve definitely been seeing more and more challenges with hiring and retaining people independent of this.

Joshua Tree National Park in California saw vandalism and trees cut down during the shutdown. Was there any damage at Glacier Bay?

Other parks definitely had a lot more potential for that. Given the nature of visitation in the winter, there’s not that many tourists that come, so we were kind of protected from that. On the other hand, the local community really depends on the park and wasn’t able to go. But we had very little damage. I can’t think of any.

What was the economic impact of the shutdown?

It was a very substantial economic impact on a very small community. We live in a town that is very dependent on tourism. It’s the largest employer by far.

There were people who had bought new houses and stretched themselves financially, not knowing that this was going to happen. And there were people saying, "We’re really struggling in terms of how we’re going to make our house payments."

How long will it take the park to recover?

If there’s not another shutdown, we’re going to be able to make it so that the American public doesn’t have a significantly reduced experience here at this park.

You know, Glacier Bay is a bit different than a lot of the other parks. We have the cruise industry here, and we partner with them. We have rangers on all of the cruise ships. Our ability to give those programs for half a million people was in jeopardy.

So we feel like the shutdown ended in the nick of time. We feel like we’re probably going to recover here with most of the hiring that we need. And that’s barring another shutdown.

So are you bracing for another shutdown when the temporary funding expires on Feb. 15?

How did you occupy yourself when you were furloughed?

I think you go through different stages. First there’s the enjoyment of having the day off. But then that degrades to worry about what’s happening to all the folks who work for me and who are so dedicated to this place.

So I just tried to stay busy and do things I can’t normally do. I was a marine biologist and researcher before I became a park superintendent, so I worked on some old papers and some underwater photography.

Oh, and my wife and I did the whole eBay thing. We went through the house and figured out what stuff we could sell.

Why did you decide to become a park superintendent?

I was a marine biologist here for 15 years during a lot of the big controversies over cruise ships. I complained to the superintendent one day that not enough superintendents knew about science. She said, "That’s not my problem; that’s your problem. What are you going to do about it?"

So I made the transition into park management. I was able to get the job as deputy at Denali, which was a wonderful apprenticeship to learn about the realities of park management. And then I got to come back here as a superintendent.

It’s rare that a superintendent gets to come back to a place they know so well. I know this place so well, having done 3,000 dives here. And of course I’m very close to the community here. So that’s been one of the blessings and special things that’s happened to me.

Have you dealt with any controversies as superintendent?

Yes. As I mentioned, there were some controversies over cruise ships. The cruise industry didn’t like being regulated here. But now they see a real advantage to having our rangers on the ships to educate tourists.

And with the Huna Tlingit, there was some tension. They’re the indigenous people who were here historically but were driven out by the ice before the park was established. So it’s a unique situation where this is homeland to them, but they were driven out, and the park was established afterwards. There’s been a changing relationship and reconciliation between the tribe and the Park Service to the place where we are now, where we’re working together.

How do you like the job of superintendent overall?

It’s a wonderful job. I feel like my life has been leading me to this point. And I do feel like this is far more than a job. When things happen to people in the community, they happen to me. So I’m very emotionally invested in the community and what we’ve done here. And few people have gotten the opportunity to come back as a manager to a place they know and love so much.