This Patch of Heaven emerges as anti-government hotbed 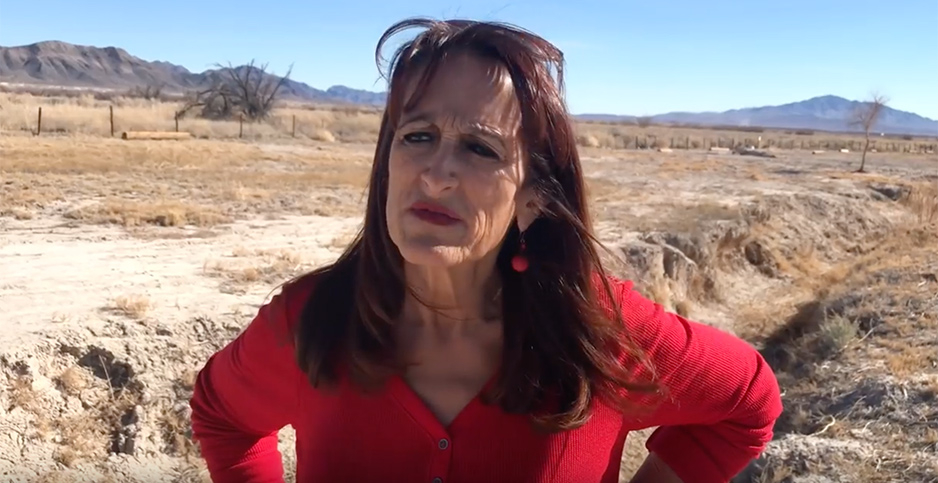 Annette Fuentes, who with her husband owns Patch of Heaven Christian Camp inside Ash Meadows National Wildlife Refuge in Nevada, is involved in a long-running battle with the Fish and Wildlife Service over a water diversion project that allegedly eliminated a stream on the property and led to repeated flooding. David Fleeman/YouTube

The 40-acre Christian camp sits within Ash Meadows National Wildlife Refuge and once held baptisms in a stream — until the government diverted the water.

Both Bundy’s campaign and the libertarian website Lysander Spooner University will host events to highlight the long-running legal battle being fought by the camp’s owner, a Nevada-based church called Ministerio Roca Solida.

Documents filed in the U.S. Court of Federal Claims show that in 2006, the Ministerio Roca Solida paid $500,000 to purchase a 40-acre site located within the boundaries of the wildlife refuge.

The site, advertised online as a "Christian retreat camp," includes two bunkhouses that can sleep up to 50 people, two smaller cabins, and a 50-person chapel and meeting room.

Court documents note that the property also featured a desert-spring-fed stream, which once watered plants as well as a recreational pond on the site and was at times used for baptisms.

But in 2010, FWS completed a water diversion project that eliminated that stream and allegedly led to subsequent and repeated flooding of the property. The project aimed to protect an endangered fish found only in the area.

"We’ve been in a battle fighting this," Annette Fuentes, who along with her husband, Victor Fuentes, owns the church, said in a video posted to YouTube earlier this year. "They come in and do what they want to do. They want us out of here. They want this whole refuge for themselves."

In a lawsuit now pending in the U.S. Court of Federal Claims, the Nevada-based ministry is seeking $3 million in restitution as well as the restoration of the watershed. The lawsuit accuses the government of taking the plaintiffs’ land and water rights without compensation.

The Desert National Wildlife Refuge Complex, which includes the Ash Meadows refuge, declined to comment for this story, citing the lawsuit. FWS officials will not attend tonight’s events.

The Justice Department’s Environment and Natural Resources Division, which represents FWS in the case, has denied any wrongdoing and asked for the case to be dismissed.

The Ministerio Roca Solida has faced hurdles in its challenge to the government, including several previous lawsuits that have failed to produce any results.

The U.S. Court of Federal Claims dismissed a 2012 lawsuit because the ministry had also filed a case in the U.S. District Court for the District of Nevada. An appellate court upheld the ruling, and the Supreme Court in 2015 denied the ministry’s petition for certiorari.

The District Court in Nevada ruled against the ministry in 2016 on claims that the FWS project had violated the First Amendment’s Free Exercise Clause, which guarantees religious freedom, but dismissed the rest of the case without prejudice, meaning it could be refiled later.

Pendley noted that those prior cases — in which the ministry was represented by the Nevada Policy Research Institute’s Center for Justice and Constitutional Litigation — failed on legal technicalities and not the merits of the case.

Court records state that the Nevada Policy Research Institute "became unable to continue operation of its legal center" in December 2017, and a federal judge approved the addition of Mountain States Legal Foundation attorney Christian Corrigan to the case this past Tuesday.

Pendley objects to the characterization of the ministry’s camp as an "in-holding" on public lands, arguing that the government should not be viewed differently from private landowners.

"There’s no special exception," Pendley said. "Obey the law and don’t create a nuisance, or trespass or damage the neighbor’s property because of action you’ve taken on your own property."

He added: "No private individual would be allowed to engage in the activity which the Fish and Wildlife Service engaged in in this instance."

FWS’s mission is to "conserve, protect, and enhance fish, wildlife, plants, and their habitats."

The "spring-fed stream restoration project" — the description used by DOJ officials — was focused largely on recovering the endangered Ash Meadows speckled dace, a minnow that prefers "fast-moving outflows" and exists only in the Amargosa River Basin, according to FWS data.

"That water is spoken for by wildlife," Donnelly said. "Ash Meadows harbors one of the highest levels of biodiversity in all of North America, and is home to numerous fish, insects and plants protected by the Endangered Species Act. It is a biodiversity hot spot of global importance."

‘A trickle of water’

Ministerio Roca Solida did claim a small victory in late 2016 when the Nevada Division of Water Resources (DWR) ordered FWS to return a flow of 0.003 cubic foot per second to the Patch of Heaven camp.

But Annette Fuentes has criticized the results of that order, which she described as a 1.5-inch pipe that funnels water into a storage tank.

"We have a trickle of water running through a pipe pumped into a storage tank," she said in a February video with Nevada brothel owner Dennis Hof, who is seeking a seat in the Nevada Assembly.

In documents filed in the 2012 lawsuit in the U.S. District Court in Nevada, DOJ’s attorneys argued that the church cannot own a specific stream even if it is entitled to use the water that feeds that stream.

Despite rulings from the state engineer’s office and the Nevada DWR, however, federal attorneys have indicated in court documents that they could challenge the ministry’s claim of a "vested interest" in the property’s water rights if the case proceeds.

In Nevada, "vested rights" for water date to before 1905 and are outside the statutory permitting process used for claims created after the establishment of the Office of the State Engineer.

Although the state adopted a new law last year requiring owners of vested water rights claims to file "proof of ownership" with the state engineer before Dec. 31, 2027, the adjudication process could stretch for decades. Older claims may rely not only on deeds or bills of sale, but on contemporary newspapers or agricultural reports (Greenwire, Jan. 3).

‘We need to wake up’

In the meantime, the Fuenteses and their attorney will rally with supporters tonight at the Patch of Heaven camp.

Although the Ash Meadows refuge was one of three areas to see increased federal law enforcement in the wake of the occupation of Oregon’s Malheur National Wildlife Refuge by protesters led by Ryan Bundy and his brother Ammon Bundy, it appears unlikely tonight’s event will draw a significant crowd (Greenwire, Feb. 4, 2016).

According to data on the Patch of Heaven Facebook page, nearly 300 people had been invited to the "Power & Light Rally" event but only a dozen had indicated they would attend. Another three dozen stated they were "interested" in the event, according to the website.

No data were available on the "Constitutional Water Rights Freedom Rally," promoted by Ryan Bundy’s gubernatorial campaign. Bundy and members of his family, including Cliven Bundy, came to prominence during their 2014 standoff with Bureau of Land Management agents when the agency attempted to seize the family’s cattle over unpaid grazing fees and trespass fines.