This pipeline lawyer is ready for a climate showdown 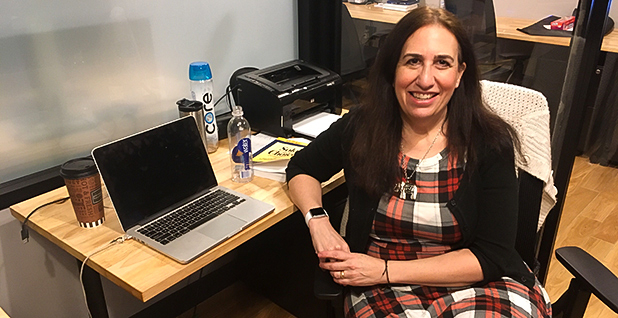 A lawyer and hired gun for small towns, ranchers and farmers fighting infrastructure linked to the nation’s natural gas boom, Carolyn Elefant works with her team in an office one block east of the White House. Pamela King/E&E News

Carolyn Elefant has her eye on a legal brawl over climate change with the federal government.

The 54-year-old New Jersey native represented landowners and a nonprofit challenging Dominion Energy Inc.’s New Market Project outside Otsego County, N.Y., before FERC. She then launched a lawsuit in the U.S. Court of Appeals for the District of Columbia Circuit when FERC used a procedural document concerning the New Market Project to announce a seismic shift in its approach to climate reviews.

"FERC wants to have it both ways," she said during a recent interview near her downtown Washington, D.C., offices. "They want to approve a project by saying there’s a need because the gas is going to this hub. But then they say they don’t know where the gas is going, so they can’t evaluate the impacts on climate change."

Landowners and the New York environmental nonprofit Otsego 2000, now represented by New York attorney Michael Sussman, are challenging the New Market Project in court, citing FERC’s inconsistent views about the use of gas and associated emissions. Oral arguments in the case are set for April 11. If FERC prevails in court, Elefant warned it would result in a massive regulatory inconsistency for the agency.

Elefant is no stranger to FERC, where she worked after graduating from Cornell Law School in 1988. Now that she’s working on the other side of the bench, Elefant appreciates clients who do their homework.

It was client-driven analysis that drew her into a courtroom fight over a natural gas compressor station in Minisink, N.Y. She ultimately lost the case, but the lawsuit kicked off a new era of pipeline-related legal challenges as a boom in Appalachian gas production triggered demand for new transport options (Greenwire, Aug. 22, 2016).

Elefant, who lost her husband, Bruce Israel, to cancer a few years ago, said she can envision a move to Boston someday to be closer to her two daughters, who both attended her alma mater, Brandeis University in Massachusetts.

She sat down with E&E News to talk about FERC, pipeline fights and new battle lines around climate change:

How have pipeline policy and lawsuits changed since Minisink?

At that time, it was a big deal to get a dissent [from FERC]. Now it’s a really partisan commission.

Back with Minisink, the environmental groups were very conflicted. In fact, one of the reasons Minisink came to me was that they had been turned down by a lot of different environmental groups — partly because their case was just too small, but also because, at that time, gas was viewed as a necessary evil in order to bring wind and solar online. It’s really interesting how even the energy industry can change kind of quickly.

You recently noted that FERC has a roughly 75 percent win rate in appellate cases. What does that tell us?

It’s pretty typical. The chances of getting overturned on appeal is already very small to begin with.

FERC this year, at least from reading the decisions, probably took a little more beating in the courts than it had in the past.

[FERC Solicitor] Bob Solomon has really turned that office around because when I first started bringing appeals, I had much better results. People weren’t prepared. They do some really good work now. I’d prefer they didn’t (laughs).

Where are pipeline challengers making the most important strides?

I know environmental groups would highlight the issues related to climate change, like with the Sabal Trail case. I think FERC is going to be forced to go back and act like some of the other agencies in looking at what the climate impacts are, especially as we see more evidence that climate change is a more serious problem than people have anticipated.

At some point, people have got to be looking at why these pipelines are being built and where the gas is going because it has implications for eminent domain. I don’t think there’s been enough done in those cases. There’s data that you can get to figure out where the gas is going, but it takes resources that my clients often don’t have. Often, I’m representing a small group of four or five people. I would like to see some of these bigger groups try to go after that information.

Do you think environmental groups are too focused on climate challenges?

I think they’re pressing that issue to the exclusion of other issues that FERC looks at, which is what is the need for these pipelines to begin with, and do you need to have five pipelines through a region?

I want to see improvements to the website; there are times it doesn’t even work. I think FERC should be more proactive about letting the public know they can call a hotline or call a project manager. And I would really like to see a little more independent review from FERC.

Security or not, I think the commissioners should at some point be going out to these sites. They really need to see what is happening on the ground. Before I started doing pipeline work, even when the Minisink people came to me, I was very skeptical.

They said, "This was going to be built across the street from our houses. We’re always going to see it." I thought, "Oh, they’re exaggerating." I drove out to the site. That [compressor station] practically sits on top of the hill. You see it as you’re driving into a residential neighborhood. It really was like 300 feet from a house. If commissioners went out to the site, it might kind of make them at least think twice about building these things.

I would have adjudicated hearings on some of these controversial projects where there is question about need. How can anybody say these affiliate deals are lawful if you don’t have any data? Where is a landowner or even an environmental group supposed to go about getting data?

In the long run, it actually makes things more manageable. You don’t spend all your time trying to get information. You just get it in the discovery process. That’s really the biggest change I’d want to see.

Are you optimistic FERC will make some of these changes?

No, I don’t think any of these other things will ever happen either. I don’t even know if anything is going to happen with the policy statement. And [Chairman Kevin McIntyre] is gone, and LaFleur is leaving, so it’s just going to be very different.

How will the pipeline wars play out?

Well, I was hoping it would be a better end. I get the sense that once these pipelines are put in, there will be more development in the future. Liquefied natural gas is going to be an open market.

If there’s some kind of catastrophic accident like [the 2010 San Bruno gas pipeline explosion in California], who knows what will happen.

Otherwise, I think many of them will probably go forward, and the environmental money for challenges will start to go away. We’ll just be back to the communities. There may be other landowner or constitutional challenges that would take place somewhere.

Do you expect to see any of the pipeline lawsuits land in the Supreme Court?

The way the courts are currently handling immediate possession in natural gas cases, it really is wrong. There’s nothing in the statute that says you can take property and pay later, but the 4th Circuit just affirmed it and the 3rd Circuit affirmed it. Sometimes if there are a lot of circuits that have gone one way on an issue and there’s still opposition, the Supreme Court will look at it.

The other issue that really does need to be litigated at some point is whether you can use eminent domain where there’s a certificate that’s conditioned on receipt of other permits. You don’t know if the project is going to go through, and you can’t really say it’s in the public interest because the certificate hasn’t been issued.

What I would want to see litigated, if the facts were ever there, is whether an export pipeline would qualify for eminent domain under the way the statute is currently written. But again, I don’t think anyone’s ever going to be able to get enough information to see whether these projects are going for export.

What is your favorite part of a case?

I like any case where I have control of the brief. I like being able to frame the argument myself. It’s critical. It’s a different experience arguing a case where you’ve had the opportunity to do that.

I like oral argument if I’ve had a chance to frame the issues myself, but it really depends on the judges that you get on the panel.

The interview has been edited and condensed.

Clarification: This story has been clarified to reflect that Elefant was replaced as counsel in the Otsego case. New York attorney Michael Sussman submitted briefs and will argue the case in the D.C. Circuit.