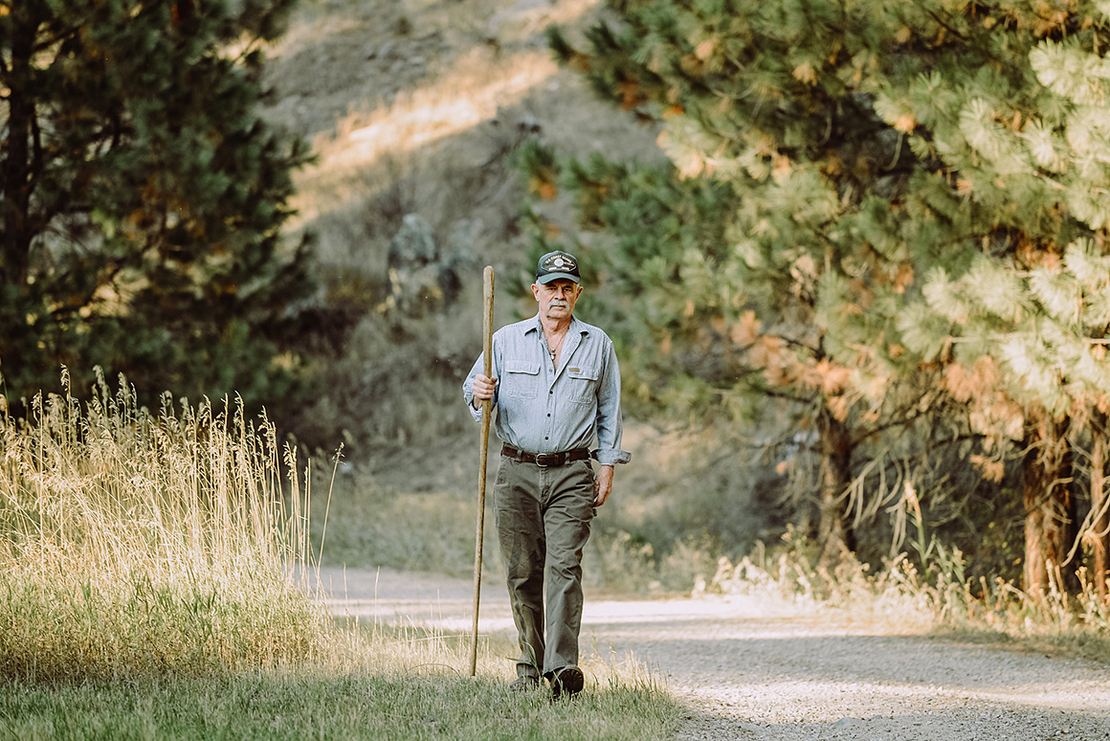 After raising two sons and parting ways with his partner in 2000, Wilkins, a Vietnam War veteran with post-traumatic stress disorder, craved quiet. In 2004, he found what he called a “picture-perfect” 10-acre patch of land along the East Fork of the Bitterroot River, nestled in the stately ponderosa pines of the Bitterroot National Forest in the farthest reaches of western Montana.

Wilkins, who goes by “Wil,” said his “perfect neighbor” is a California couple who fixed up a caboose as a summer cabin and live near Wilkins’ property along Robbins Gulch Road only about two weeks per year. “I moved here for peace of mind and for quality of life,” Wilkins, 72, said in a recent interview.

On Wednesday, Wilkins’ attorneys will appear before the nation’s highest bench to argue that the Montana landowner and one of his neighbors, Jane Stanton, should have legal recourse against the Forest Service for posting a sign in 2006 along Robbins Gulch Road indicating that it was open to the public.

Wilkins and Stanton sued the Forest Service in 2018, saying that installation of the sign exposed their lands to hunters, trespassers and thieves.

Supreme Court arguments in Wilkins v. United States will focus not on the claims Wilkins and Stanton have raised against the Forest Service but on a procedural question that could make or break the property owners’ case: Did their lawsuit come too late?

The justices’ decision could have implications for legal disputes under “countless” federal laws that impose statutory deadlines, said Kian Hudson, an attorney at Barnes & Thornburg LLP.

Two lower courts have sided with the Justice Department’s position that Wilkins and Stanton exceeded a deadline under the Quiet Title Act, which allows lawsuits against the federal government for using or modifying property up to 12 years after a challenger knows — or should have known — that the United States held a claim on the land.

Then the justices, who only agree to hear a tiny percentage of cases that come their way, added Wilkins to their calendar — potentially indicating that they see things differently.

Wilkins hopes they do.

He said he has spotted hunters on snowmobiles at 5 a.m. speeding through the field beside Stanton’s house, which is located across from his on Robbins Gulch Road.

He said cat hunters have turned their dogs loose on his property to track cougars, bobcats and wolverines that prowl a ridge behind his house. Wilkins recalled following one of those hunters down to Highway 93 and pulling over to snap photos of the man’s license plate while the man called his dogs in from their chase.

“And people coming in and poaching and killing elk off of our properties,” Wilkins said, growing heated. “I’m sorry. I just get a little wound up. I’ve got to push my chill button.”

Perhaps the worst offense occurred on a night in September 2019, after Wilkins left his home to attend a cider-squeezing party. The next morning, while making the 37-step commute from his house to the blacksmithing shop where he spends most of his waking hours, Wilkins spotted his cat, Mr. Kitty, limping and bleeding. Wilkins’ first thought was that Mr. Kitty had tussled with a raccoon or a fox. It was a Sunday, and the vet’s office was closed, so Wilkins nursed Mr. Kitty through the night and took him in the following day.

The vet later called him to say that Mr. Kitty had 18 pieces of metal inside his body. He had been shot.

“I went back across town to the local office store, and I had reward posters made, and I posted a $1,000 reward and put it on the road along Robbins Gulch for the conviction of the person who shot my cat,” Wilkins said.

Mr. Kitty survived the gunshot. But a short time later, Wilkins said, the cat wandered away.

“I don’t know if he went somewhere and died or what,” he said. “But he disappeared.”

Too late to sue?

Wilkins hinges on a simple question with potentially significant consequences.

The justices must determine whether Wilkins and Stanton had a strict 12-year window to sue the U.S. government under the Quiet Title Act or whether the statute allows challengers to stretch that deadline — if they have a really good reason.

Wilkins and Stanton have had a tough time making their case to lower courts. Stanton acquired her land on Robbins Gulch Road in 1990, and Wilkins has lived on his property since 2004, according to Supreme Court filings.

Prior owners of both properties negotiated a limited-access easement on the road in 1962 — a fact Solicitor General Elizabeth Prelogar highlighted in Supreme Court briefs on behalf of the Forest Service.

“As the lower courts correctly held, a reasonable landowner would have been on notice of the Government’s claim prior to August 23, 2006, twelve years before the complaint was filed,” she wrote.

DOJ attorneys also argued on behalf of the Forest Service, which declined to comment for this story, that — since at least 1972 — agency maps have marked the road as providing unrestricted access to the Bitterroot National Forest.

“This case feels to me like new people bought the land and decided that they didn’t like the public use and decided to bring a claim, but it’s honestly inconceivable to me that hunters haven’t been using this road for decades,” Judge Lawrence VanDyke said during August 2021 oral arguments in Wilkins before the 9th U.S. Circuit Court of Appeals.

“The key is that any use was sporadic until recently, until the last decade,” McCoy said at the time.

DOJ attorney Kevin McArdle said during 9th Circuit arguments that Wilkins and Stanton “may have tolerated lower levels of use” for a time, but their case hangs “on the claim that the easement prohibits all public use.”

McArdle continued: “Then any public use … is sufficient to start the clock.”

The Supreme Court may be a more receptive audience, said Hudson.

He pointed to the court’s unanimous April ruling in Boechler v. Commissioner of Internal Revenue, which held that Congress did not clearly state whether federal law imposed a stringent 30-day deadline for taxpayers to appeal penalties for document discrepancies.

“The statute in the Boechler case is significantly less clear than the Quiet Title Act,” said Hudson.

In Wilkins, the court could provide more clarification on which statutes are subject to the no-exceptions deadline to sue, Hudson said.

For decades, the court was “not so scrupulous about drawing that distinction” on how strict deadline rules should be, he said.

The court could also weigh in on one of the defenses the Forest Service invokes — sovereign immunity, or the legal doctrine that says the federal government can’t be sued without its consent.

Wilkins is “not a super controversial case,” Hudson said, “but I think it’s one that is going to affect lots of litigation in all kinds of areas — not just the Quiet Title Act.”

Pro-business groups and local governments have thrown their weight behind the arguments Wilkins and Stanton have raised before the Supreme Court.

The Cato Institute and other groups wrote in a friend of the court brief that a win for the U.S. government could shut the courthouse doors to other private landowners embroiled in property disputes.

“One may view this case simply as a dispute over the scope of an easement,” lawyers for the groups wrote in their amicus brief. “But doing so would miss the forest for the trees.”

They continued: “Instead, this case asks whether and to what extent rightful private property owners must stand idly by while suffering intrusions on their property, and acquiesce to government recalcitrance and dereliction.”

Wilkins, Cato and other groups argued, presents an opportunity for the Supreme Court to enforce its 2021 ruling in Cedar Point Nursery v. Hassid, another Pacific Legal Foundation-backed case.

In Cedar Point, the justices delivered a 6-3, ideologically divided ruling in favor of the firm’s client, a California strawberry grower who argued that union organizers infringed on his property rights when they came onto his farm to recruit workers (Greenwire, June 23, 2021).

Cato and its allies said private property owners face inherent disadvantages in disputes with the federal government — and that courts should decide close cases in favor of private landowners.

Attorneys for the National Association of Counties and other local-government organizations said a Supreme Court ruling against Wilkins and Stanton could, among other things, lead to unfair litigation tactics from federal officials

“For example, if the federal government asserts an easement through little used, underdeveloped county land, a county may have no reason to challenge that assertion at first,” the groups wrote in their amicus brief. “A decade later, however, the county may find an important use for the land as the site of a new recreation center or water treatment facility, leaving the county with little time to negotiate an agreement with the United States over such use.”

No groups have filed amicus briefs in Wilkins in support of the federal government’s claims.

A Supreme Court win for Wilkins would not resolve his battle with the Forest Service — but it would allow him to continue his fight against the agency in federal court.

When asked how he felt about the Supreme Court’s decision to pick up his case, Wilkins paused for a few beats before answering.

“It was overwhelming to think that justice may prevail,” Wilkins said, fighting back tears. “Right now, the way it stands — in my country that I voluntarily joined the military to defend — the way it stands, I am not even being allowed a fair hearing.”

He continued: “They're taking away my private property rights, and I'm not even being allowed a fair hearing. I mean, I just can't get my head wrapped around that.”