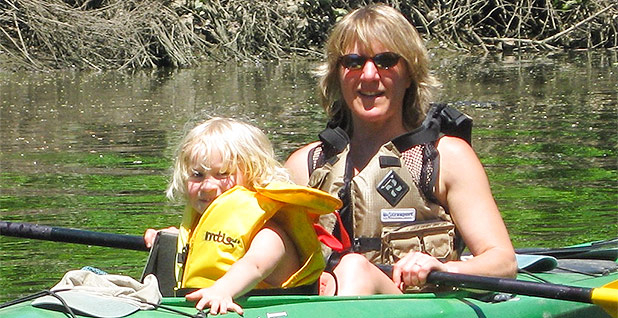 But the 51-year-old activist and attorney won’t back down.

A mother of two and graduate of the Elisabeth Haub School of Law at New York’s Pace University, van Rossum’s philosophy — and new book, "The Green Amendment: Securing Our Right to a Healthy Environment" — pulls lessons from the Pennsylvania Supreme Court’s decision four years ago to strike down an industry-backed measure that would have allowed oil and gas development in nearly every corner of the Keystone State. Central to the case was a section of the Pennsylvania Constitution that includes a unique "environmental rights" amendment (Energywire, Nov. 25, 2014).

What’s the rough side of environmental advocacy?

I’ve been chased around my car, I’ve been punched, I’ve had my hair pulled. I’ve had my home threatened with having oil from the Delaware River deepening project dumped on my front yard. I’ve been encircled by a group of very large men in a very dark parking lot trying to be threatening. I’ve been called many names.

The Act 13 case that breathes life into Pennsylvania’s Environmental Rights Amendment. Not only did it give to the people of Pennsylvania a long-ignored right to a healthy environment, but it really put me on this path of thinking through a green amendment movement and trying to get a constitutional recognition of the inalienable right to a healthy environment in every state in the nation.

It was a case challenging Pennsylvania’s drilling law, called Act 13, where the Delaware Riverkeeper Network used the state’s long-ignored Environmental Rights Amendment to challenge a pro-drilling, pro-fracking piece of legislation.

All of them. There are too many to name. The defeat against the deepening of the Delaware River navigation channel down to 45 feet, to name one. That’s playing an instrumental role in the continuing decline of the Atlantic sturgeon of the Delaware River, a genetically unique population found nowhere else on Earth with less than 300 spawning adults left.

That’s what put me on my path. I ended up going to Pace, which specializes in environmental law. I went there to be a better advocate.

As a kid, I spent a lot of time playing with friends in Ithan Creek in Delaware County, Pa., where I grew up. We would crawl through the little pike that took us under the road. So I spent a lot of time in the creek and in the forest that led down to the creek. That’s the way we lived our lives in our family, you go outside to play.

I always said that if I couldn’t find a job protecting the environment, I’d go sell shoes. I thought it was benign and I’m not willing to take on anything that would require me to go against my beliefs when it came to environmental protection.

No, these FERC commissioners are reaching into people’s private homes, into their lives with the decisions they’re rendering. Having someone stand outside their homes singing songs or delivering a card, you know, I just think it is wrong to equate that with the incredible overreach and harm FERC is inflicting upon landowners in the way of these pipeline projects.

No. Then I’d only be working on one state. I really want to inspire communities and lawmakers in every state in the nation.