This Weather Channel star grew up wanting to be a stuntman 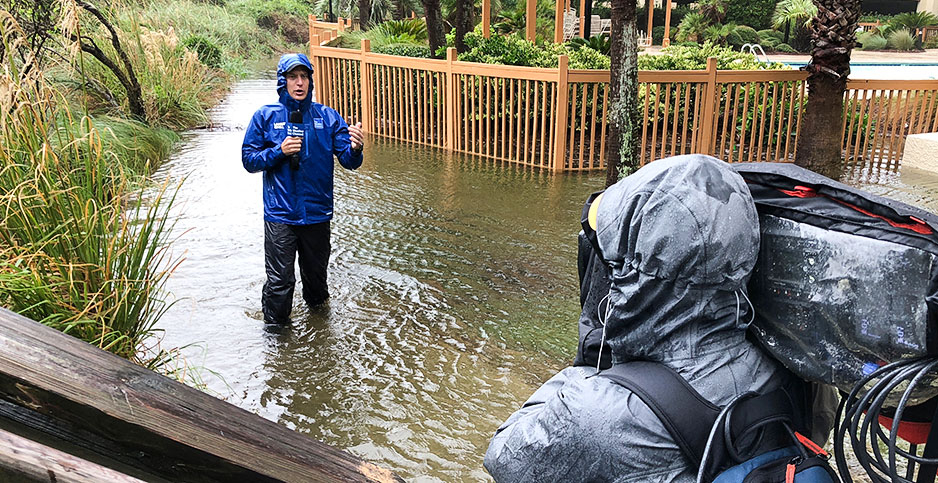 Bettes, 46, has been accused of "hyping" storms he covers. He chalks that up to a misunderstanding of his job and the whims of Mother Nature.

"I’ve gotten it even with this storm: ‘Boy, you guys really hyped this one, Category 1 at landfall,’" Bettes said in an interview yesterday about coverage of Hurricane Florence.

"The reality is that dozens of people died in flooding," he said. "So to me, I’m like, ‘Is that hype when literally dozens of people perished in a hurricane and many, many towns went underwater?’"

Bettes was among a throng of weather forecasters and reporters who descended on the Carolinas to cover Florence. The storm’s wind speed weakened from a Category 4 to a Category 1 before it made landfall in Wilmington, N.C., last Friday, unleashing record-breaking rains that overwhelmed coal ash ponds, sewage systems and manure lagoons and contributed to the deaths of at least 42 people.

The Weather Channel came under fire after a Twitter user shared footage of meteorologist and reporter Mike Seidel trying to gain his footing in Florence’s winds while two men walked casually behind him. The Weather Channel defended Seidel, saying he was standing on wet grass and was "undoubtedly exhausted."

For his part, Bettes has seen his share of deadly weather since joining the Weather Channel in 2003. He’s reported live from Hurricanes Katrina and Sandy, and narrowly survived a 2013 tornado in Oklahoma that tossed his SUV, collapsing the roof. The same tornado killed three storm chasers.

The son of an Ohio autoworker and real estate agent, Bettes had an early fascination with the weather. After earning a bachelor’s degree in atmospheric sciences from Ohio State University, he went on to work as a meteorologist.

Bettes talked to E&E News about reporting on monster storms and talking about climate change in the field.

Have you always been a thrill-seeker?

Depends on who you ask. [Laughs.] My mother would probably say otherwise because she swears that when I was a kid, I wanted to be a stuntman and I would literally throw myself down the stairs to toughen myself up.

I’d probably pick different seasons. In spring, it would’ve been the El Reno tornado in 2013. As far as hurricanes go, probably the worst I’ve ever been in was probably Irma last year, although for a variety — the windiest? Irma. The wettest? Harvey. The scariest? Ivan.

Have you had any close calls in the field?

Where should I begin? [Laughs.] I realize I’ve had way too many.

Too many to count?

There would probably be three, the first being in 1999 when I was covering Hurricane Floyd. There was a moment where an air conditioner blew off the top of a building and landed very, very close, feet away from me and my crew. So that was a near miss that could’ve ended differently.

The other was Ivan in 2004 where I was almost hit by a vending machine and had a lot of glass thrown at me at the hotel that we were staying at. And then the other being El Reno when we were actually hit by the tornado and tossed into a field.

Why do you keep doing it?

I feel like it’s my responsibility as a meteorologist to show people the reality of what weather is. And in television, that’s done through pictures, right? It’s done through video. And so it’s just a lot different hearing about a hurricane or a tornado or a snowstorm, you know, from a studio on a radar or a forecast map and then seeing it in real life.

Do you talk about climate change when you’re reporting on storms?

As the storm is forming or approaching land, we don’t have a lot of conversation on air about climate change and storms. Usually, it happens after the fact, and especially something like hurricanes where you can make a connection to our changing climate, to what hurricanes are doing, especially when it comes to rainfall.

If you look at the past two years, there’s a lot of evidence that the streaming patterns in the atmosphere have slowed because of a warming planet, and that in turn makes hurricanes slower.

The jet stream has slowed as a result of a warming planet, and that means how you steer something is slower, and so it allows for something like a hurricane to produce a lot more rain than it may have otherwise if global warming hadn’t been there.

I look at something like a Harvey or Florence, these are producing record rains that we hadn’t seen before. You have to make that connection and drive it home to people that what we as humans are doing to our planet is having direct ramifications on us.

Do we give storms an opportunity to last longer, to sustain themselves at higher intensities for longer periods of time? Yes. Do we allow storms to hang around longer, especially over land where they impact people? Yes. And so those things are things that I think about when I’m covering a hurricane or when I think about the background of the weather and climate behind large-scale storm systems.

What’s the difference between climate and an individual weather event?

But it’d be very difficult to say, "Oh, that tornado or that couple of tornadoes was directly caused by climate change." It’s impossible to do.

How can we tell if a weather event has been influenced by climate change?

It’s difficult to put the finger on a single event being influenced by climate change, but I would say what we know the calling card of climate change to be is a variety of things. Over the course of time, we see this play out. It’s flooding events. It’s larger snowstorm events. It’s more — it’s rainier hurricanes.

What does that mean for you and your job?

I prepare to cover events for a longer duration of time than ever before.

Normally when I would go to a hurricane, in a "normal" hurricane, I would pack for four or five days, expect to do a couple of days of coverage, the landfall, and then a day or two afterwards, and then I’d come home. For Florence, I packed for nine days knowing that the storm is gonna be around for a while.

So longer, wetter storms that have changed your preparation.

It means for what I do and what the Weather Channel does — we’re there from beginning to end, and the end is a lot longer than it used to be. Especially with any precipitation event.

We’re even seeing it with droughts. I mean, our droughts are incredibly persistent now, and they’re happening with a lot more frequency and a lot more intensity. We see that plenty out in the West every single year.

You’re quite a celebrity online.

[Laughter.] You know, I never have ever considered myself a celebrity.

The reality is, I’m just a weatherman, and I’m imparting the forecast on people or I’m showing them what a storm is. I think that at the Weather Channel, a lot of the meteorologists that cover weather out in the field, when we have our highest viewership, when there’s a big storm, they see me out there and they’ve seen me out there for 15 years.

I was in Hawaii covering Hurricane Lane last month, and a guy literally came up to me and said, "My mom is not gonna believe it. I’m literally standing next to Mike Bettes. Would you talk to her on the phone?" [Laughs.]

And so I was literally talking to this guy’s mom, ’cause she didn’t believe him, that it was me standing there in the hurricane.