This won’t be the climate election after all. So what? 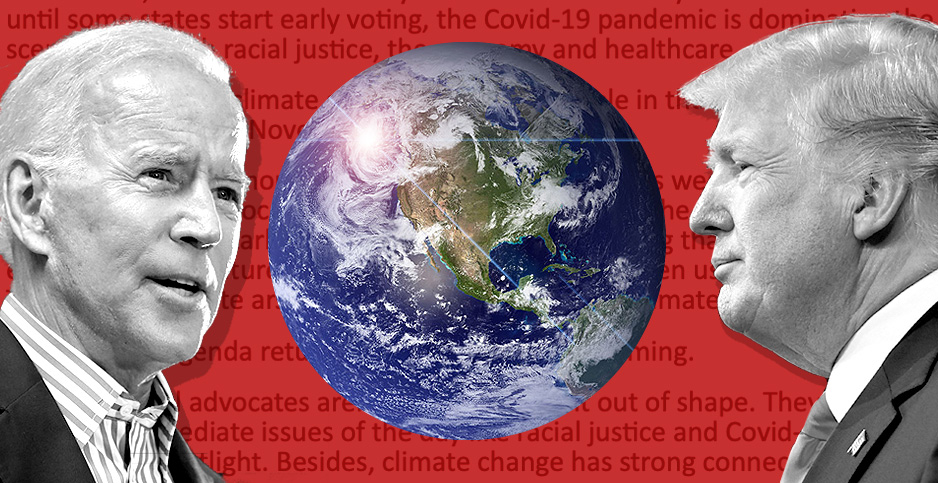 The COVID-19 pandemic and the death of Supreme Court Justice Ruth Bader Ginsburg, among other issues, mean climate change is not front and center in many voters' minds. Claudine Hellmuth/E&E News (illustration); Gage Skidmore/Flickr (Trump and Biden); NASA (Earth)

This could have been the year of the first real climate change election. It probably won’t be.

After years of climate change being low on voters’ priorities, getting almost no news coverage as a campaign policy issue and only getting the occasional debate question, 2020 had the potential to be a blockbuster year for climate change.

But instead, with less than 50 days until Election Day and voters in some states already voting, the COVID-19 pandemic is dominating the scene, along with racial justice, the economy and health care.

And since Supreme Court Justice Ruth Bader Ginsburg’s death Friday, the fight over replacing her on the court has overshadowed every other issue and might remain front and center through the rest of the campaign.

Climate got a moment in the spotlight earlier last week when President Trump and his Democratic rival, Joe Biden, focused on the wildfires in the West, highlighting their stark differences.

Trump denied that climate change was fueling disasters or even that temperatures would continue to rise. Biden, in response, called Trump a "climate arsonist" and touted his climate plan. But then the campaigns returned to regular programming.

Despite pushing for debate questions and lamenting the lack of attention to climate, many environmental advocates say they are trying to keep perspective.

They recognize that the more immediate issues of the day, like racial justice and COVID-19, probably deserve the spotlight. Besides, climate change has strong connections with those issues.

"Accepting that reality and not ignoring it, I feel really good about where climate is for the next president, assuming it’s Joe Biden," he said.

Julian Brave NoiseCat, vice president of policy and strategy at Data for Progress, a progressive think tank, said climate matters — no matter what is happening or taking people’s attention.

"Whether climate matters is not an independent variable that’s out there, determined by the views of voters," he said.

NoiseCat said Democrats, through this campaign cycle and previously, have shown themselves to be the only party that is willing to act aggressively on climate, and that’s worthwhile in and of itself.

By many measures, voters aren’t prioritizing climate much more than before. The Pew Research Center last month found it to be voters’ 11th highest priority out of 12 it polled. Gallup said in January that climate was the seventh most likely issue for voters to rank as "extremely important."

That’s despite numerous developments since the 2016 presidential race. Dire reports from organizations like the Intergovernmental Panel on Climate Change and the U.S. government painted a bleak picture of a future without significant greenhouse gas cuts.

Extreme weather events are getting more intense, including floods and wildfires. The Green New Deal broke out in late 2018 as a major progressive pillar.

Adding to that, Trump has rolled back dozens of environmental policies, including pulling out of the Paris Agreement, cutting methane emissions limits for oil and natural gas drillers, and making it more difficult to protect imperiled species.

And climate played an unprecedented role in the Democratic presidential primary. Nearly all candidates wrote detailed plans to combat climate change, with ideas like stopping fossil fuel extraction on federal land and putting a price on carbon emissions.

That’s given some advocates significant optimism that voters will pick a candidate based at least somewhat on climate.

"Climate is going to have huge resonance in this election, particularly with young people," said Tom Steyer, the billionaire climate activist; former presidential candidate; and co-chairman of Biden’s Climate Engagement Advisory Council, a group of activists tasked with promoting his environmental agenda.

"It’s tied to racial justice, it’s tied to the economy. There’s no way to separate those. And Biden has done a fantastic job of tying his climate plan to environmental justice, to the creation of millions of jobs."

Steyer argued that Trump’s decision this month to block offshore oil and natural gas drilling off the coasts of Florida, Georgia and South Carolina — and his declaration in Florida that he is the most environmental president since Theodore Roosevelt — is a sign of the issue’s significance (E&E News PM, Sept. 8).

"When Trump goes to Florida and says he’s the most environmental president since Teddy Roosevelt, that’s actually a good thing, because it means he understands what a disaster he’s been," he said. "It’s an explicit acknowledge of his failures."

‘No one is paying any attention’

Democrats appear to prioritize the climate more than the electorate as a whole. An NPR/"PBS NewsHour"/Marist College poll this week found climate to be Democratic voters’ top priority, though it’s in the middle of the pack for all voters.

Barry Rabe, an environmental policy professor at the University of Michigan, agreed that there are signs — including the Florida announcement — that this will be the year climate matters.

"In ways that we haven’t seen before, the climate and environment issues never really go away. It keeps resurfacing in ways that are relatively unique to the last 20 years or so," said Rabe.

"Whether that’s wildfires and extreme temperatures in California, or a policy pivot in the Trump case, or likely future discussions by the Biden team about what it is they’d do and how that’d link to economic development and the like," he added. "So I think this does feel different than 2016 and 2012."

Furthermore, elections with an incumbent are usually a referendum on the incumbent’s tenure, Rabe said, and Trump has a significant record of environmental rollbacks for voters to consider.

But Mike McKenna, an energy policy consultant and former senior official in Trump’s White House, said general election voters have never prioritized climate or the environment, and there’s little reason to think this year will be different.

"The race is coming down to a referendum on either management of the coronavirus (in which case Mr. Biden wins) or management of public safety (in which Mr. Trump probably wins)," McKenna said in an email.

Biden has a clear climate plan, he said, but "no one is paying any attention to it." McKenna added, "I just think that the general flow of the campaign has been focused on the candidates rather than what they might do."