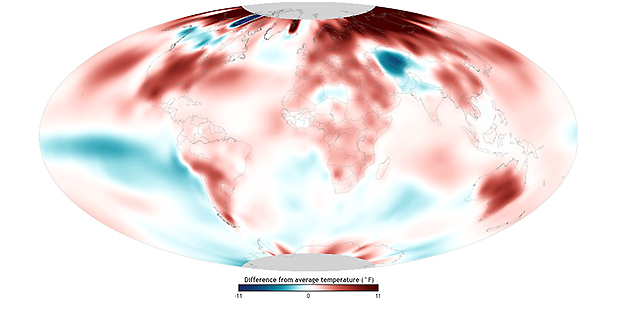 There is a better-than-50% chance that 2020 will be the planet’s warmest year on record, NOAA said yesterday, as climate change continues to accelerate despite the pandemic and economic slowdown.

The global average temperature for the first 11 months of 2020 nearly eclipsed the record set in 2016, when an El Niño climate pattern elevated temperatures for part of the year. NOAA temperature records go back to 1880.

"This year is more indicative of what climate change is doing to the globe," NOAA climatologist Ahira Sánchez-Lugo said in an interview. "In 2016, there was a moderate-to-strong El Niño that boosted global temperatures to new heights."

NOAA published its latest global temperature data yesterday, a week after similar results were released by the European Commission’s Copernicus Climate Change Service. The climate service reported that the first 11 months of 2020 were "on par" with the same period in 2016 and that when the year is complete, 2020 could be "marginally warmer" than 2016.

The six warmest January-through-November periods have occurred in the past six years, NOAA said.

The continued rise in global average temperatures illustrates the long-term nature of climate change and the inability to influence it with short-term events like the decline in emissions spurred this year by the global economic slowdown from COVID-19.

Global emissions of carbon dioxide, the most prevalent planet-warming gas, fell by nearly 9% in the first half of 2020 compared to the same period a year earlier, researchers found, citing pandemic-driven lockdowns.

The drop in emissions isn’t affecting global temperatures because carbon dioxide stays in the atmosphere for thousands of years, and the current levels that are driving global warming have been accumulating for a long time, Sánchez-Lugo said.

Other emissions that have fallen during the pandemic, such as nitrogen dioxide and particulate matter, are not greenhouse gases.

"The general public might have thought that because there’s a lot of talk of the slowdown and lower emissions, that maybe there’s no more climate change. But it doesn’t work that way, unfortunately," Sánchez-Lugo said. "We’ve already changed our climate. We’re going to be living in a new warmer world."

The United Nations’ World Meteorological Organization stressed the point in a September report that said, "Climate change has not stopped for COVID-19."

NOAA reported higher-than-average temperatures this year across the planet, with the largest increases occurring in northern Asia. Record warmth was recorded in the first 11 months of 2020 in southeastern Asia, Europe, northern Africa, southern North America and South America, as well as the Atlantic, Indian and Pacific oceans.

In the United States, the average temperature so far this year is the fourth-highest on record, according to NOAA. The average U.S. temperature of 56.06 degrees Fahrenheit is well above the 20th-century average January-through-November temperature of 53.78 F.