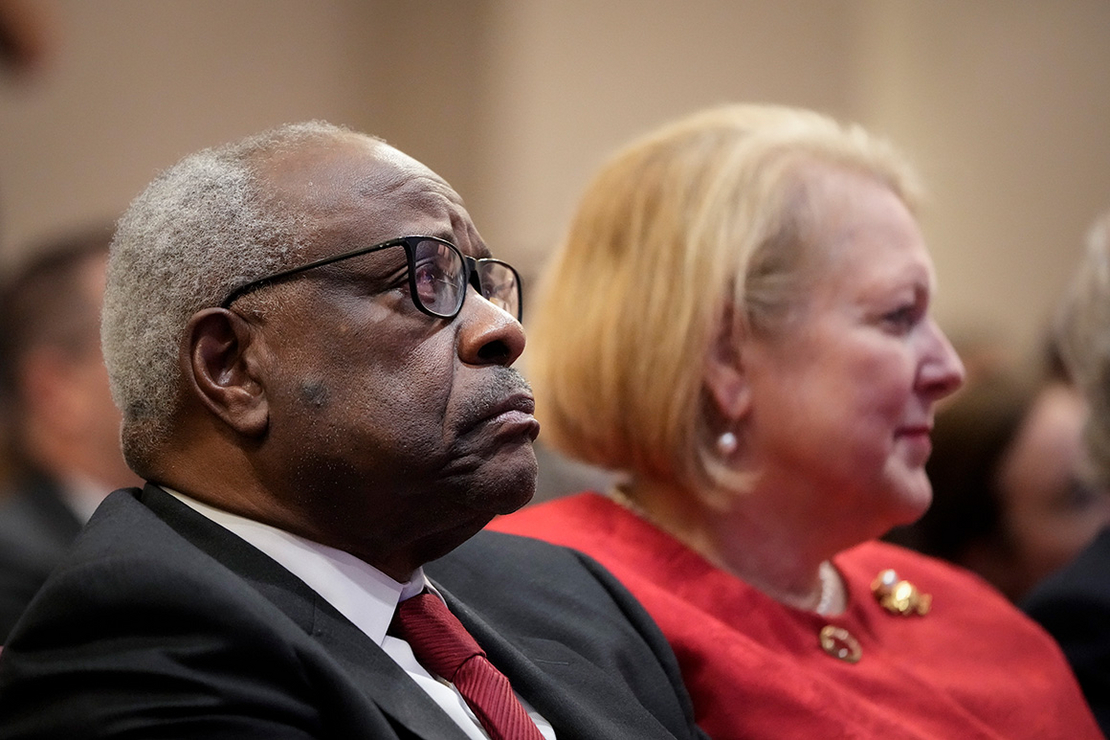 As debate roils over Justice Clarence Thomas’ involvement in election-related cases, one environmental lawyer is exploring another time the Supreme Court justice has faced recusal calls.

In a new Harvard Environmental Law Review article, lawyer Scott Stern delves into Thomas’ history as a Monsanto Co. attorney in the late 1970s during the dawn of the modern environmental movement — and his resistance over the years to bow out of cases involving the agrochemical giant.

Based on his research of archival materials, Stern purports that Thomas’ three years at Monsanto early in his legal career helped transform him from registered Democrat at age 18 to one of the Supreme Court’s most conservative members at 73.

“[T]he effect Monsanto and the broader chemical industry had on [Thomas] was profound,” wrote Stern, a recent Yale Law School graduate who is now a clerk for the 9th U.S. Circuit Court of Appeals. “The effect he, in turn, has had on the environment and on our environmental rights is undeniable.”

Stern’s article comes as Democratic lawmakers and some ethics experts have called for Thomas to step back from cases related to the 2020 election and for the Supreme Court — or Congress — to strengthen its recusal rules.

The calls follow reporting on March 24 by The Washington Post and CBS News that the justice’s wife — Virginia Thomas, who goes by Ginni — had urged then-White House chief of staff Mark Meadows to push baseless claims that the 2020 election had been stolen from former President Donald Trump.

In January, Clarence Thomas was the sole vote against the Supreme Court order that blocked Trump’s request to withhold White House communications from the House select committee investigating the Jan. 6 Capitol Hill riot.

“This is a textbook case for removing him, recusing him from these decisions, and all I hear is silence from the Supreme Court right now,” said Sen. Amy Klobuchar (D-Minn.), a member of the Senate Judiciary Committee, during a March 27 appearance on ABC’s “This Week.”

“Washington Democrats are now trying to bully this exemplary judge of 30-plus years out of entire legal subjects or off the Court entirely,” McConnell said during a March 30 speech on the Senate floor.

The Supreme Court did not respond to a request for comment on this story.

Supreme Court recusals are a controversial subject, as they are left to the discretion of the justices, who rarely explain their decisions to step back from cases.

Judicial disqualification law requires justices to bow out of cases in which their impartiality “might reasonably be questioned” — including in disputes presenting family or financial conflicts or where a jurist has served as a private practice attorney “in the matter in controversy.”

Recusals can also sometimes cause problems for the court if the remaining eight justices cannot form a majority.

While recusals from cases involving former employers depend on the particular facts of a dispute, debate over Thomas’ participation in Monsanto cases “highlights another deficiency in the current ethics regime,” said Alicia Bannon, director of the judiciary program at NYU’s Brennan Center for Justice.

During his 30 years on the nation’s highest bench, Thomas has faced calls to stay out of Monsanto cases but has routinely helped issue rulings in favor of the company and other chemical industry litigants, Stern found in his paper.

He cited one document in a polychlorinated biphenyls contamination case in which a plaintiffs’ lawyer said a search for records related to Thomas’ role at Monsanto might be “useful to induce settlement and/or head off appeal from final judgment.”

Monsanto manufactured the chemicals, known as PCBs, from 1935 until they were banned in the United States in 1979. While he was at Monsanto, Thomas was responsible for negotiating contracts for PCB disposal, Stern wrote.

Thomas has weighed in on PCB contamination cases that have come before the Supreme Court.

In the 1997 case General Electric Co. v. Joiner, for example, Thomas was part of the court’s unanimous rejection of a claim related to electrician Robert Joiner’s case that GE and Monsanto should be held liable for his exposure to PCBs while working with machinery at a Georgia utility plant.

The Supreme Court has taken up many more Monsanto cases since Thomas arrived on the bench in 1991 — and the justices could soon consider a petition from the company that has the potential to upend a landmark cancer settlement related to its Roundup weedkiller (Greenwire, Dec. 9, 2021).

In his paper, Stern cited instances of other justices recusing in similar circumstances. As one example, Justice John Paul Stevens — whose son, a Vietnam war veteran, died from cancer — did not participate in former military members’ challenges against Monsanto and other manufacturers of the lethal herbicide Agent Orange.

Monsanto, which is now owned by the German pharmaceutical company Bayer AG, did not respond to a request for comment on this story.

As a member of the Supreme Court, Thomas has repeatedly expressed skepticism of broad powers for federal agencies like EPA — an attribute Stern links back to the justice’s early environmental work.

Shortly after former President Ronald Reagan was elected, Thomas urged Danforth to pursue a position on the Environment and Public Works Committee to “limit the impact of the Clean Air and Clean Water Acts,” according to the lawmakers’ archived documents, which Stern reviewed for his research.

“After all,” Stern wrote, “reining in these laws could cripple the regulatory authority of EPA and liberate companies like Monsanto to operate unencumbered.”

From Danforth’s office, Thomas eventually joined the Reagan team as assistant secretary for civil rights at the Department of Education — but two of his biographers say the administration originally eyed him for an environmental position.

He went on to serve as chair of the Equal Employment Opportunity Commission and was appointed by former President George H.W. Bush to the U.S. Court of Appeals for the District of Columbia Circuit.

That move eventually catapulted Thomas to the nation’s highest bench.

Stern wrote in his paper that he aimed to offer a fuller view of Thomas’ environmental work at a time when the justice’s “once-fringe positions” are gaining mainstream acceptance by the court’s newly bolstered conservative wing.

Challenges seeking to limit the reach of both the Clean Air Act and the Clean Water Act are currently before the Supreme Court — as is a case that could upend Chevron  deference, which gives agencies like EPA leeway to interpret ambiguous statutes (Greenwire, Feb. 14).

“[H]is environmental ideology matters because, as numerous commentators have argued, Thomas — the senior Associate Justice on an increasingly conservative Court — is arguably the nation’s most influential justice,” Stern wrote.