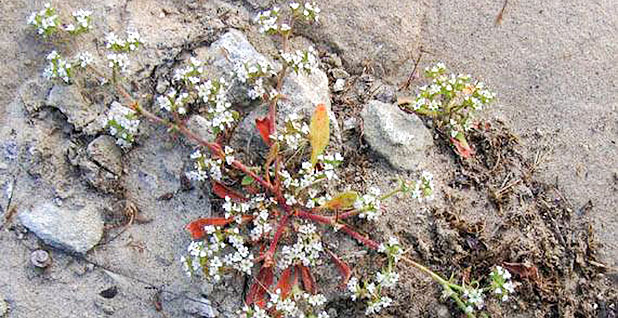 The San Fernando Valley spineflower could pose a problem for the Trump administration, which has yet to declare any species as threatened or endangered. National Park Service/Wikipedia

Environmentalists support listing the spineflower as threatened, just like the Fish and Wildlife Service proposed during the Obama administration. A prominent Southern California landowning company, though, opposes the move.

The clash reaches a slow boil Friday, when the latest public comment period closes. Then will come the really hard part for the Trump administration, which has yet to independently initiate and finalize designation of any species as threatened or endangered under the ESA.

"I implore you to list this plant as threatened," Oak Park, Calif., resident Alison Merkel wrote the Fish and Wildlife Service. "Every plant and every animal is an essential part of nature, and as such, should be protected, when possible."

The spineflower saga won’t fade quickly. The Fish and Wildlife Service, which first identified the plant as a candidate for ESA listing in 1999, currently expects to render its final decision in March.

Interior Secretary Ryan Zinke, like many other Western Republicans, has been critical of how the Endangered Species Act works, and last month his acting FWS director backed "in general" a package of GOP-authored bills that critics say would gut the 1973 law (Greenwire, July 19).

At the same time, the administration has not yet nominated candidates to serve as either the director of FWS or assistant Interior secretary for fish, wildlife and parks, two positions with crucial oversight of the ESA.

Until now, Trump administration officials have essentially been dealing with an inherited backlog. Though they have delisted a previously listed species, the Wyoming gray wolf, and downgraded the manatee from endangered to threatened, they have not initiated and finalized a new listing.

The last ESA final listing was for the rusty patched bumblebee, which was initially published Jan. 11, nine days before the Obama administration ended. The protections were scheduled to take effect in February but were instead delayed until March 21.

Still, agency officials moved relatively quickly on the rusty patched bumblebee, following receipt of a listing petition in 2013 and subsequent litigation. The spineflower decision has taken much longer.

"Because of the fluctuation in occupied area and population numbers and the different methodologies used to conduct surveys, we are not able to determine if the population is stable or increasing or decreasing at this time," FWS noted last fall.

Some of the plants are found in the vicinity of an ambitious development called Newhall Ranch, long proposed by Newhall Land and Farming Co., now a subsidiary of Five Point Holdings. The company has already taken steps to protect the plant, including setting aside preserves and funding for management.

"The federal listing of spineflower is not warranted at this time, particularly given the adequacy of existing protections," Matt Carpenter, a Five Points vice president, wrote FWS in November.

The company has long been a force to reckon with in California. It is represented in Washington by Ferguson Group lobbyist Mark Limbaugh, who formerly served as deputy commissioner of the Bureau of Reclamation and as assistant Interior secretary for water and science.

"The service extended the deadline … to investigate scientific disagreement regarding the potential impact of Argentine ant invasion on the pollination ecology of the spineflower," the agency stated, adding that "there is also scientific uncertainty related to the establishment of spineflower populations into suitable, unoccupied areas using seeds."