‘Those things did not occur’: Pruitt denies EPA wrongdoing 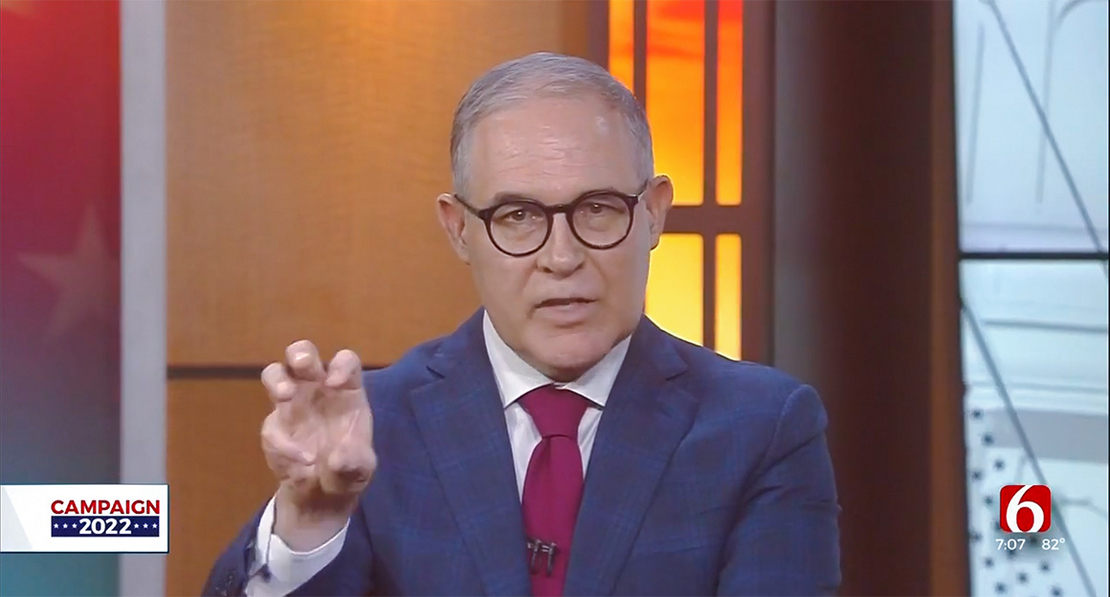 Former EPA Administrator Scott Pruitt said he would treat being in the U.S. Senate similarly to how he acted as head of EPA. He also denied a recent agency report that accused him of prodding security agents to drive recklessly and turn on emergency lights and sirens.

In a debate yesterday, the first GOP debate in the Oklahoma special election to succeed retiring Sen. Jim Inhofe (R), Pruitt used his tumultuous EPA tenure as a key qualification for the position.

“As the EPA administrator for President Trump, I took on the headwinds of the radical environmental left, exited the Paris accord, saved billions of dollars for the American economy, achieved energy independence. And as your U.S. senator, I will fight for you in the same way,” Pruitt said at the event, hosted by television stations KWTV and KOTV.

“I will not bow, I will not yield to the intimidation, the lies or otherwise of the left or of the media, and advance the truth on behalf of Oklahoma,” he continued.

Pruitt, the former attorney general of Oklahoma, has frequently invoked his EPA experience in the Senate race, despite being pushed out of the job in 2018 amid multiple allegations of impropriety (E&E Daily, May 3).

According to a recent EPA report, he directed his security staff to drive recklessly, sometimes because he was late, including speeding, driving into oncoming traffic and improperly using sirens. The report, from EPA’s Office of Criminal Enforcement, Forensics and Training that was prepared in 2018 but was released publicly last month (Greenwire, May 27).

The moderators of last night’s debate asked Pruitt about those recent findings and whether voters should trust him with the authority of an elected office.

“Those things did not occur,” Pruitt said. “And … what’s interesting about those processes internal to Washington, D.C., is that I was never asked one time a question about any of those matters, nor was the head of my security.”

Some of the allegations regarding Pruitt’s security, including his prodding agents to use sirens, were reported publicly in 2018. In a Senate hearing at the time, then-Sen. Tom Udall (D-N.M.) asked him if the accusations were true.

“I don’t recall that happening,” Pruitt responded. “There are the policies that the agency follows, the agents follow. And to my knowledge, they followed it in all instances.”

At yesterday’s debate, Pruitt also used the line of questioning over his security to boast about his clashes while at the agency.

“Oftentimes, D.C. deals in shadows. And as the head of the EPA for President Trump, we were dealing with issues with that agency that many were trying to undermine on a day-to-day basis,” he said. “And so controversy doesn’t mean that things are true. And advancing that agenda on behalf of President Trump meant a lot to this country, and it also was battled on a day-to-day basis with untruths in the media.”

Pruitt led EPA under former President Trump from 2017 until he was pushed out in 2018 amid numerous allegations that he had improperly used his office for personal gain or otherwise violated ethics standards, including that he had made EPA staff run personal errands, that he had tried to find work for his wife and that he had rented an apartment, below market rate, that was tied to a lobbyist with business before EPA.

Rep. Markwayne Mullin, the polling front-runner, had said he would participate but reversed yesterday, saying he had to stay in Washington, D.C., to fight Democrats’ gun control proposals.

A poll last month commissioned by the news stations that hosted yesterday’s debate found Pruitt in fourth place, behind Mullin, Shannon and Dahm, with support from 3.3 percent of likely voters in the Republican primary.

The winner of the primary will face former Rep. Kendra Horn, the sole Democrat to file for the seat.