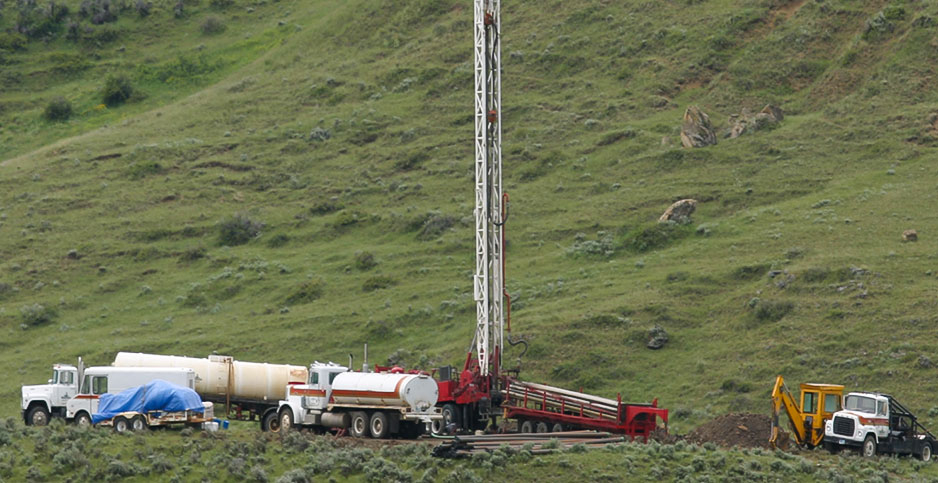 Across the West, thousands of oil and gas wells sit idle on federal lands.

Some are on hold for better pricing. Others have been left to sit for so long that the risk of abandonment is high. And many are orphaned, the companies that drilled them now defunct.

How many of these abandoned wells are out there is unclear. They pose environmental and safety hazards, but, as critics note, the Bureau of Land Management doesn’t have a good way of tracking them.

Yet there’s not nearly enough money set aside to plug the ones that are known. Years after a gas price bust in the early 2000s forced oil and gas companies to shutter, federal officials have yet to remove the nonproducing wells from perpetual limbo.

"It does pose a risk," said Frank Rusco, natural resources and environment director at the Government Accountability Office. "Will they be able to reclaim all those wells?"

The abandonment challenge continues to expand. The federal government counted 89 wells in the last two years that were newly orphaned on public lands. Each represents a cost to the taxpayer and a risk of hydrocarbons migrating into groundwater resources from decaying infrastructure.

BLM, which oversees federal oil and gas leasing and drilling, has been scolded by oversight bodies for not keeping better track of orphans. The agency notes wells that aren’t producing, but critics say it’s slow to affirm that nonproducing wells have just been abandoned.

Data revealing the number of orphan wells that should be plugged by BLM doesn’t precisely exist, said Rusco.

"They don’t keep the right records to be able to answer that question," he said of the Interior Department.

GAO included the federal oil and gas program on its 2011 "high risk" list of programs that are vulnerable to fraud, abuse and mismanagement in part because the office said it didn’t have a robust system for tracking wells — or demanding money to clean up after an oil firm’s collapse.

Earlier this year, GAO reported that 84% of bonds for federal oil and gas development were likely insufficient to cover cleanup costs.

The issue is playing out as "energy dominance" has been a key priority for President Trump. The administration has winnowed federal regulations on oil and gas development and encouraged greater leasing of federal lands. The Democratic-controlled House has prioritized blocking development from sensitive areas and restoring Obama-era regulations. It also wants to reform the oil and gas program by raising royalty rates and forcing companies to offer more money upfront for cleanup costs before being allowed to drill.

Rep. Alan Lowenthal (D-Calif.) said during a subcommittee hearing Sept. 24 that operators on federal lands were getting a "sweetheart deal." Rusco, though, reminded lawmakers at that hearing that commodities are boom and bust: If you go looking for cleanup funds from industry once it goes bust, you’ve likely missed your shot, he said.

The risk of leaving bonding unsecured is billions of dollars in costs to the taxpayer and a hazard on the public landscape, proponents of reform say. But a crisis-level bust has already happened.

In a statement, BLM argued that it is actively improving its oil and gas program, forming partnerships with states like Wyoming and keeping better account of when a company may be in distress and bonding on its wells needs to be increased.

"Under the Trump Administration, BLM has taken action to both better track orphan wells and get proper accounting of them on our online platform," an Interior spokesman wrote in an email. "The BLM is continuing to make strategic investments to improve its process for idle and orphaned wells."

Despite multiple investigations by GAO and Interior’s Office of Inspector General, data is hard to come by for idle and abandoned wells on federal land. States that are also dealing with orphans sometimes provide a clearer picture of the challenge.

Colorado, for example, had more than 400 unreclaimed sites, including 275 wells as of July. The state is in the process of accelerating its orphan well cleanup program. Its Legislature upped the number of full-time employees working on the orphan wells in 2019 from one to four. The General Assembly also bumped the budget from $445,000 to $5 million.

Environmentalists report that old shut-in wells litter the landscape in oil states like Utah and New Mexico. But nowhere in the West is the orphaned well story as accessible or striking as Wyoming.

It started, as most oil and gas stories do, with a boom.

In the early 2000s, developers realized there were high quantities of natural gas available from coalbed methane seams in northern Wyoming. Accessing that gas required draining substantial amounts of water and drilling many shallow gas wells. The effort promised to return enormous profits.

But as hydraulic fracturing unlocked a national gas boom, prices fell. Post-2008, so did the coalbed methane industry. Larger oil companies jumped out of the business, and smaller companies picked up the many wells still producing at a bargain. Unable to make a profit from the declining wells, many of those poorly leveraged firms went bust.

No one was prepared for the level of abandonment that hit Wyoming, despite a century of oil experience in the state.

Mark Watson, chief of the Wyoming Oil and Gas Conservation Commission (WOGCC), said the coalbed story is one of volume. In under a decade, industry had punched 20,000 wells in the ground, he said.

Since 2014, nearly 6,000 wells on state and private Wyoming land have been orphaned. Less than half of those have been plugged. That work has cost approximately $12.7 million so far, according to a state update in September.

Bonding — the security that industry lays down ahead of drilling for cleanup liabilities — covered just 18% of the cost, according to state records.

But in a stark difference with the federal crisis, Wyoming has a financial stream to pay for cleanup. When the coalbed methane bust showed signs of significant orphan well accumulation, the state raised an ongoing tax on operators that pays for plugging and abandonment costs.

The state program prioritized a schedule for cleanup. It changed bonding rules so that idle wells started paying a fee. Wyoming requires operators to submit updates on the integrity of their wells once idle, to catch potential degradation that leads to leaks and other hazards.

Jill Morrison, an organizer with the Wyoming landowner group Powder River Basin Resource Council and a longtime observer of the Wyoming oil and gas business, said the state still has a crisis on its hands.

Nearly 15 years after the price bust, the orphan well list in Wyoming has gone up, not down, she said.

"We cannot get ahead of it," she said.

Federal wells in Wyoming faced the same coalbed methane bust, but Morrison and others say the government hasn’t kept up with the state in dealing with the crisis.

"I know that there is a tremendous number of wells out there on the federal lands that in all likelihood should be plugged under the same conditions as the state," said Bob King, an oil and gas consultant who helped create — and continues to participate in organizing — Wyoming’s orphan well program.

The federal lag on orphan cleanup is "frustrating," King said, given the state’s success.

King calculated that there are about 2,200 wells on federal lands in Wyoming that are likely orphaned because the state has seized the bonds for their former owners’ state and private land wells.

Watson said that as a regulator he’s sympathetic to BLM’s challenges. If Wyoming needs more money for orphan well cleanup, it can simply bump up the tax that operators pay. BLM can’t just tax companies or charge fees to pay for cleanup. It has to go to Washington for money, he said.

BLM says it’s gaining ground on the idle and orphan well issue. In late 2018, an Interior memorandum instructed the agency to keep better track of wells where bonding is insufficient and ask for additional bonding. In the last two years, BLM has collected 16% of the additional bonding it deemed necessary.

The agency is also working with states. Since late 2017, the WOGCC has been capping BLM wells that are near its own plugging activities. Wyoming’s orphan well fund pays for the reclamation, and BLM reimburses the state, said Watson of the WOGCC.

BLM did not provide a count of orphan or idle wells for publication but noted it lacks jurisdiction to charge operators to pay for reclamation.

"The BLM does not have the authority to pre-emptively seek or collect fees from lease operators to reclaim orphaned wells. It is within Congress’ purview to authorize this activity, yet Congress has not exercised this authority," an Interior spokesperson said in an email.

GAO’s Rusco said it’s likely true that funding is part of the problem and it’s good that new guidance is identifying where bonds need to be increased. But he noted sustained concerns.

"Just identifying operators who are at risk of default on reclamation obligations does no good if the same operators cannot pay to do the work. More reason for BLM to either identify problems earlier or assess fees to cover costs not covered by bonds that no one disputes are inadequate to plug abandoned wells," he said in an email.

"I would also stress that BLM field office identified $46 million in potential liabilities from orphaned or idled wells that may be orphaned," he said. "There is no reason why the public should be on the hook to pay for reclamation."

Morrison, of the Wyoming landowners group, said the coalbed methane bust is a preamble to a bigger crisis to come. Coalbed methane wells are shallow and their imprint on the landscape limited. Wells being drilled today — that also lack full bonding under the current oil and gas program rules — would be far more difficult and costly to clean up, she said (Energywire, Sept. 19).

"The deep horizontals, they are going to make the coalbed methane look like a picnic," she said.

Conservation groups increasingly argue that regulators should hold bonds that reflect the total cost of cleanup. But Watson said that wasn’t necessary, at least not for Wyoming.

What the public doesn’t hear about are the thousands of wells that are plugged every year by the companies that drilled them, he said, adding that Wyoming had never had a serious orphan well problem before the gas price bust that killed coalbed methane.

Industry argues that the coalbed methane saga is a unique story.

Jimmy Goolsby, an oil and gas consultant in Wyoming and one of the pioneers of the early coalbed methane boom, questioned the characterization of the play as a total loss. The boom was important for local and state income, and it provided natural gas at a time of need, he said.

"I’m proud of that part of it," he said. But the abandoned wells are "embarrassing somewhat."