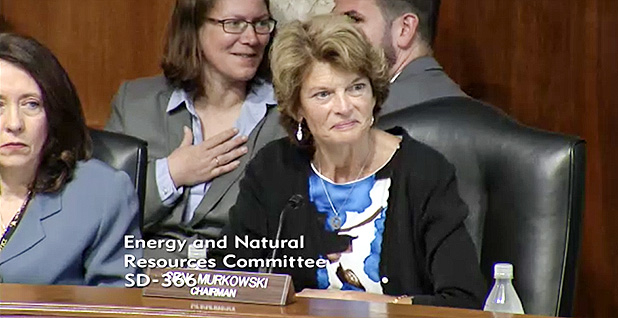 The day after joining two of her Republican colleagues in casting the decisive votes that sank the Senate Republican health care bill last week, Lisa Murkowski got on a plane to Alaska.

Once she got there, she spent part of the weekend salmon fishing with family and friends on an island off the state’s southeast coast.

The outing was a stark and welcome contrast compared with recent events, when the chairwoman of the Energy and Natural Resources Committee simply couldn’t escape the media spotlight she’d rather avoid.

In the run-up to a procedural vote June 25 on taking up health care, Murkowski fielded a "hard call" from President Trump seeking to sway her. After she voted "no," Vice President Mike Pence stepped in to cast the tie-breaking vote to launch debate.

The following morning, Trump attacked Murkowski on Twitter, saying she had "really let the Republicans, and our country, down yesterday."

Later that day, Interior Secretary Ryan Zinke, a former congressman, called the senior Senate lawmaker to express the president’s disappointment in her position.

She declined to discuss that call, which she characterized as "difficult," but fellow Alaska Republican Sen. Dan Sullivan later told reporters that Zinke had told him that Murkowski’s vote threatened energy development on federal land in the state.

Despite the pressure, Murkowski stood her ground on health care, making her a hero of Democrats and other voters who oppose GOP plans to scrap the Affordable Care Act.

Along with Sens. John McCain (R-Ariz.) and Susan Collins (R-Maine), Murkowski later in the week voted no on a scaled-back plan, seen as a last-ditch effort by Republican leaders to score a win on the issue.

Back in the Capitol, where the Senate is toiling two weeks into its scheduled August recess, Murkowski said she was happy to have the previous week behind her. And despite the pressure, there doesn’t appear to be any political repercussions in the short term for her votes on health care.

While Adam Brandon, president of the conservative FreedomWorks, told Axios this week that Murkowski should be stripped of her ENR gavel, members of the committee said yesterday that wouldn’t happen.

"Look, we all vote for what we believe is right according to our beliefs, according to the state we represent," said Sen. Cory Gardner (R-Colo.), who heads the Senate Republicans’ campaign wing. "And that’s what Senator Murkowski did, and I don’t think anybody can question that."

Gardner said, "I don’t think there will be an uprising against Lisa Murkowski."

Sen. John Barrasso (R-Wyo.), who is next in line in committee seniority, told E&E News yesterday there was no discussion within the conference about replacing her atop the panel.

‘Tomorrow is another day’

Murkowski yesterday said she feels comfortable with her standing in the GOP conference, noting that discussions continue with Republicans, as well as Democrats, on health care.

"I know that for some the disappointment with last week’s outcome is really hard right now, but I think that’s assuming that there is not any going forward from where we are right now," she said. "And that’s just not the case."

It’s not the first time Murkowski has been in this predicament. In 2010, Murkowski stepped down from the Senate Republican leadership after she lost the GOP primary to tea party favorite Joe Miller.

At that time, there was some sentiment within the Senate GOP caucus for replacing her as ranking member on ENR.

But Murkowski emerged from a closed-door conference meeting with the top slot, and she went on to beat Miller in the general election after waging a historic write-in campaign.

Murkowski, who was re-elected last year with little of the drama of 2010, said yesterday that difficult votes come with the terrain.

"It was a tough vote, and I think we all recognize and understood that," she said. "But we take tough votes around here, and we are not always in 100 percent alignment. Each one of us has that power of our individual vote."

As it did in 2010, she said the health care fallout will blow over.

"There will be times when as a Republican I am a little annoyed at another Republican because they didn’t vote the way that we wanted, or the process had to shift or be put on pause, but we move beyond these things all the time, and I expect we will move beyond this, as well," said Murkowski.

Sen. Richard Shelby (R-Ala.), who serves on the Appropriations Committee with Murkowski, and who switched his party affiliation in 1994 during his second term after clashing with the Clinton administration, called Murkowski a "good senator" who should stick with the GOP.

"Tomorrow is another day," he told reporters last week. "I have never threatened anybody who doesn’t vote with me on an issue because tomorrow we might have another issue, right?"

American Petroleum Institute President Jack Gerard told E&E News this week that he was not concerned that there would be any long-term policy fallout from the tension between the administration and Murkowski.

"We’ll let them work it out, and I’m confident over time they will work it out," said Gerard, a longtime lobbyist who spent a decade on Capitol Hill in the 1980s working for former Rep. George Hansen (R-Idaho) and former Senate ENR Chairman James McClure (R-Idaho).

"They need to work with each other," said Gerard. "I believe they both intend to do that, and I expect they both will as time goes on."

Like it or not, Murkowski now finds herself with a heightened national political stature after last week. Her role in the health care fight has been the subject of two columns by New York Times veteran congressional reporter Carl Hulse in the past week, which added to a flurry of positive media coverage of Murkowski, including in Alaska.

The senator said she was annoyed by all of the attention, which she said feels "kind of unnatural for me."

"This kind of stuff drives me crazy," she said as photographers snapped photos of her walking through the Senate basement at close range. "It really does."