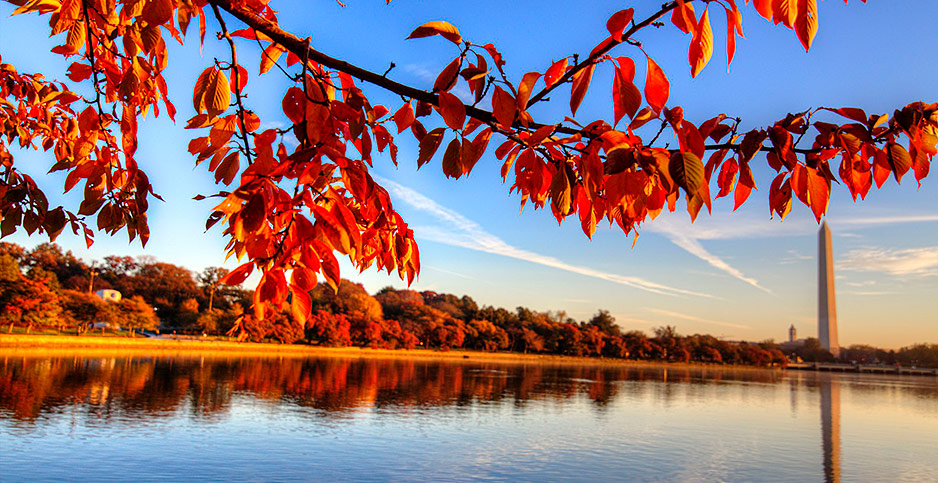 The Tidal Basin could get a massive makeover if a nonprofit group gets its way with a series of suggestions they unveiled today. Carlos Lacruz/Flickr

Faced with a crumbling sea wall and daily flooding, the National Mall’s Tidal Basin finds itself in an increasingly dire state of disrepair, with its famous cherry trees submerged in 3 feet of water during high tide.

If current conditions persist, the situation likely will worsen, with the Thomas Jefferson Memorial projected to be under 4 feet of water by 2040.

Hoping to revive the basin, the nonprofit Trust for the National Mall and its partners today launched an ambitious redesign project that could ease the flooding and bring big changes to one of the nation’s most iconic and popular public spaces.

"As part of America’s front yard, the Tidal Basin is home to some of the most iconic landmarks and traditions in the nation’s capital," Katherine Malone-France, chief preservation officer of the National Trust for Historic Preservation, said in a statement. NTHP is one of the organizations involved in the effort.

"Yet current conditions do not do justice to a landscape of such significance," she added.

The 107-acre site includes 3,000 cherry trees that draw hordes of tourists to the city for the National Cherry Blossom Festival every spring, along with monuments honoring presidents Thomas Jefferson and Franklin Roosevelt as well as civil rights leader Martin Luther King Jr.

As part of the redesign, five landscape architecture firms developed a series of proposals, including moving the cherry trees, creating new paths, adding a bridge for elevated viewing and relocating the water’s edge.

Among the other ideas: building a land bridge between the Jefferson Memorial and the White House, adding a green security wall to protect monuments and an uplands Cherry Walk, treating the memorials as islands, creating narratives to show how local wetlands were valued by Indigenous and enslaved peoples, or just allowing the entire site to flood and "creating a landscape in which entropy is on display."

Jeff Reinbold, the superintendent of National Mall and Memorial Parks, noted in the statement that the project will help "address both the very immediate concerns of the area, while also pushing our thinking about how to respond to future changes in conditions."

Officials hope the exhibition, called the Tidal Basin Ideas Lab, will encourage the public to weigh in before any final decisions are made. Throughout the video, they repeatedly listed combating the effects of climate change as one of their biggest challenges.

Mellins noted during the video presentation that the exhibition comes "at a moment when the nation is grappling with thorny aspects of its own story, as well as with the question of who gets to write it."

Catherine Townsend, president and CEO of the Trust for the National Mall, said the project "is an innovative way to bring together designers, stakeholders, and the public to imagine a new vision for the Tidal Basin and surrounding areas."

The Tidal Basin, completed in 1887, has long ranked as one of the top deferred maintenance projects facing the park service.

To handle the 36 million visitors who flock to the National Mall each year, the trust is trying to help the park service tackle a backlog of more than $800 million needed for repairs and improvements.

Along with the park service and the National Trust for Historic Preservation, the Trust for the National Mall said its partners on the project include Skidmore, Owings & Merrill and American Express.