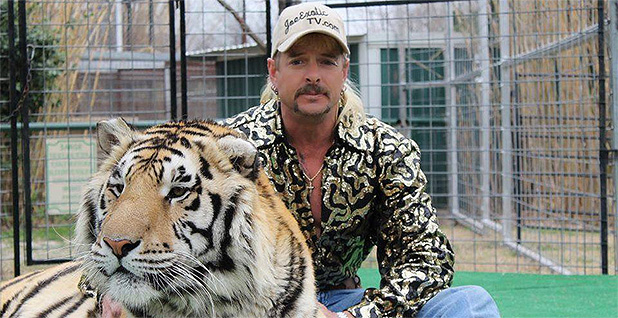 Joseph Maldonado-Passage, known as "Joe Exotic," has dropped his lawsuit against the Fish and Wildlife Service. @joe_exotic/Twitter

Joe Exotic has put to sleep his rambling, roaring lawsuit against the Fish and Wildlife Service.

Facing long odds and a court deadline, the incarcerated wild animal impresario formally known as Joseph Maldonado-Passage yesterday withdrew his suit against the federal agency that helped put him behind bars.

Maldonado-Passage’s attorney noted the impediments caused by "prison restrictions ostensibly related to the COVID-19 pandemic" in explaining why he was voluntarily withdrawing the suit rather than objecting to a judge’s recommendation that it be dismissed.

"Although [Maldonado-Passage] does not necessarily agree with all of the reasoning in the Report and Recommendation, a proper and complete set of objections would involve additional filings … which would likely result in more complications than the filing of a new action," attorney Jarrod Stevenson wrote.

Stevenson, who began representing Maldonado-Passage after the initial lawsuit was filed last March, noted that the withdrawal without prejudice leaves open the possibility of "a separate action in the future."

Maldonado-Passage is serving a 22-year prison sentence following his conviction on murder-for-hire and wildlife charges that have proved catnip to Hollywood.

Yesterday, following the popular success of "The Tiger King" podcast, NBCUniversal Media announced that its version of the Joe Exotic tale, starring Kate McKinnon of "Saturday Night Live," has been formally ordered as a series and will air on NBC, USA Network and Peacock.

"The FWS and its agents are clearly enforcing these laws under pressure of the animal rights groups," Maldonado-Passage wrote, adding that the agency had been driven to "further a private agenda to end big cats in private collections."

The suit cited alleged conspiracies and allegations involving a "crooked cop," anti-gay bias, the death of Maldonado-Passage’s mother and a $100,000 reward "placed on Plaintiff’s head."

The lawsuit sought $15 million plus $78.8 million for what Maldonado-Passage called "18 years of research and care of 200 generic tigers and cross-breeds for 365 days a year for 18 years."

Palk oversaw Maldonado-Passage’s trial, which had its roots in an FWS investigation of the now-closed Greater Wynnewood Exotic Animal Park in Wynnewood, Okla.

He is currently an inmate at Federal Medical Center Fort Worth and is appealing his conviction.