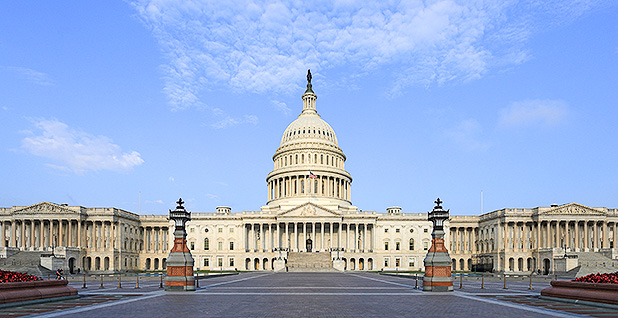 Energy and environmental issues will likely take a back seat when the Senate returns in September to more pressing fiscal priorities, including avoiding a government shutdown and a potential financial crisis.

The Senate left yesterday for a more than four-week recess after approving a slew of nominees and bills (see related story). The chamber returns Sept. 5, when it will consider a federal court nominee.

Once back, senators will try to move fast on fiscal 2018 spending bills, with federal agencies facing a potential shutdown if they don’t have new dollars or stopgap funding in place by Oct. 1.

Senate appropriators have passed six of the 12 annual funding bills, but, unlike in the House, none of them has reached the floor.

"We are working individual bills, but in the final analysis, if history is any guide, we probably would put together an omnibus" spending package, said Sen. Richard Shelby (R-Ala.), a senior appropriator.

Sen. Dianne Feinstein (D-Calif.), ranking member on the Energy and Water Development Appropriations Subcommittee, hasn’t given up hope that bipartisan $38.4 billion legislation covering the Department of Energy and Army Corps of Engineers could make it to the floor on its own.

"I don’t think there is controversy that would keep it off the floor," said Feinstein.

Sen. Tom Udall (D-N.M.), the ranking member of the Interior and Environment Appropriations Subcommittee, said the measure that funds U.S. EPA and the Interior Department will be marked up in September. It’s not clear if it would get any floor time.

Senate Majority Leader Mitch McConnell (R-Ky.), however, tipped his legislative hand in favor of an omnibus earlier this week when he took procedural steps that would allow him to more quickly call up a four-bill fiscal 2018 spending package passed by the House last month.

The procedural move signals McConnell is likely to work on a broad funding deal come September, rather than pushing individual bills.

The chamber will only meet for 16 days until the new fiscal year begins. That’s why several senators have floated the idea of a continuing resolution to keep agencies running while negotiations continue.

A more heated partisan fight is expected in September over raising the nation’s $19.8 trillion debt ceiling. The Treasury Department has said it needs Congress to back an increase by October, otherwise the government won’t be able to pay its debts.

Conservatives have pressed for other cuts in spending to go along with the debt hike, a move likely to be resisted by Senate Democrats who could filibuster the plan.

Sen. John Boozman (R-Ark.), a senior appropriator, said a debt ceiling increase is likely to be attached to other must-pass spending legislation, most likely a CR, to get enough votes.

Other senators have not ruled out having it ride on other expiring policy measures coming due in the fall, including a Federal Aviation Administration reauthorization.

"Anything’s up for grabs, whatever is easiest, these are things that need to be done," Boozman added.

Beyond debt and spending bills, Sen. Roy Blunt of Missouri, a member of Senate GOP leadership, is expecting the White House to weigh in this fall on plans for a possible tax overhaul and a large infrastructure package.

He recommended the administration should avoid the often combative tone it took in a failed bid to have the Senate back a repeal of the 2010 health care law.

"I’d rather they deal with it more like they dealt with the [Supreme Court Justice Neil] Gorsuch nomination, which is make your points, stand back and only step in when your points need to be made a second time," said Blunt.

The House plans to move forward with trying to pass a budget in the fall, and Senate Budget Chairman Mike Enzi (R-Wyo.) is planning a markup on his own chamber’s blueprint.

The process this year is less about spending levels than about setting the stage for tax reform negotiations under the process of reconciliation to prevent a Senate filibuster.

A few energy and environmental issues could emerge quickly once Congress returns.

Senate Energy and Natural Resources Chairwoman Lisa Murkowski (R-Alaska) will keep pushing for the chamber to take up her energy reform bill, which came close to emerging before recess.

In the House, the Energy and Commerce Committee will release legislation to reauthorize the Department of Energy and likely change some of its operations (E&E Daily, Aug. 3).

Interior Secretary Ryan Zinke’s final recommendations on whether to alter 27 national monuments is due Aug. 24. Whatever he decides could prompt lawmakers on both sides of the issue to introduce legislation to overhaul the 111-year-old Antiquities Act.

Many members with designated sites under review in their states — with the notable exception of the all-Republican Utah delegation — oppose shrinking or rescinding any of the monuments.

So far, Zinke has exempted four monuments located in Colorado, Idaho, Montana and Washington state. But he is expected to recommend major changes to Utah’s 1.35-million-acre Bears Ears monument, as well as to the Grand Staircase-Escalante site designated in 1996 (Greenwire, Aug. 3).

"We will fight" President Trump if he tries to reverse monument designations under the Antiquities Act, ENR ranking member Maria Cantwell (D-Wash.) said at a July rally along with five other Western Democratic senators.

Republicans and Democrats on Capitol Hill have split over whether the Antiquities Act gives the president the ability both to create and dismantle monuments (E&E News PM, March 29).

Zinke in June told lawmakers that he wants Congress to work on legislation to "clean up" ambiguities in the management of national monuments, including Bear Ears.