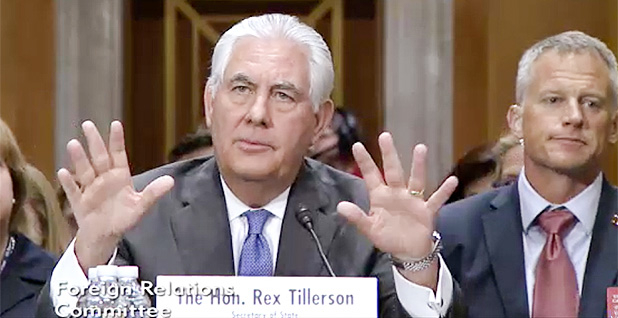 Rex Tillerson will be pushed out as secretary of State, news reports say. Senate Committee on Foreign Relations

If CIA Director Mike Pompeo replaces Secretary of State Rex Tillerson as the top U.S. diplomat, he could bring a careerlong skepticism of climate science with him to Foggy Bottom.

The New York Times reported today that the former Kansas Republican congressman might be poised for a move to State after months of strained relations between Tillerson and President Trump.

Trump told reporters Tillerson is still "here," while White House spokeswoman Sarah Huckabee Sanders said during a briefing that there are "no personnel announcements at this time."

But while Tillerson, the former Exxon Mobil Corp. CEO, raised environmentalists’ hopes last year with his belief in man-made climate change and support for continued U.S. involvement in the Paris climate accord, Pompeo has a history of disputing that humans play a significant role in global warming.

And as a member of the House Energy and Commerce Committee before his nomination to the CIA post, Pompeo blasted Obama’s "radical climate change agenda" during the 2015 climate talks in Paris and voted to scrap U.S. EPA’s Clean Power Plan.

"If anything, Pompeo’s record of climate science denial and opposition to renewable wind power puts him well to the right of Secretary Tillerson, who as a former CEO of Exxon had to at least admit climate science and the viability of renewable energy," said Paul Bledsoe, a strategic adviser at the Progressive Policy Institute and a former Clinton White House climate adviser.

Bledsoe said the Trump administration is "trending to the far-right fringe" in picking Pompeo and is "dominated by false views on climate and energy that simply would not be tolerated even by major publicly traded oil and gas corporations."

But Pompeo has been more tight-lipped about climate science in recent months, dodging pointed questions. During his confirmation hearing, he declined to answer whether he agreed with the scientific consensus that humans are driving climatic changes (E&E Daily, Jan. 13).

When asked by Sen. Kamala Harris (D-Calif.) in his confirmation hearing if he had any reason to doubt then-CIA Director John Brennan’s findings that climate change is driving global instability, Pompeo said he was unfamiliar with the analysis.

Still, Pompeo doesn’t appear to have interfered with the National Intelligence Council’s Worldwide Threat Assessment, released in May with input from the CIA, which stated again that climate change was contributing to security threats around the world.

"It’s possible that Pompeo’s views have evolved, and not least because he’s no longer looking to be re-elected and sitting at an agency that has for a long time looked at climate issues," said Francesco Femia, co-president of the Center for Climate and Security.

But it’s doubtful whether Pompeo would support international policy to curb warming.

Myron Ebell, the director of the Center for Energy and Environment at the Competitive Enterprise Institute and a well-known skeptic of mainstream climate science, applauded the rumored Pompeo move to State.

"I’m much more positive and upbeat about the prospect of Secretary Pompeo," said Ebell, who worked closely with Pompeo in a bid to ax the wind energy production tax credit.

While Tillerson supported staying in the Paris climate pact, Ebell said he thinks Pompeo "would be an enthusiastic supporter of the president’s decision to withdraw from Paris and to stay out."

Pompeo might also reconsider U.S. support for a climate agreement finalized under the Obama administration, known as the Kigali Amendment, that limits refrigerants and coolants that greatly contribute to climate change.

Environmentalists have criticized Tillerson for failing to persuade Trump to stay in the Paris Agreement, shutting down the special envoy for climate change office initiated under Obama and backing a 30 percent budget cut that would hobble U.S. diplomatic interests, including on the environment.

But Tillerson has reasserted the department’s role in driving U.S. climate diplomacy, including most recently by sending a State Department team to U.N. climate talks in Bonn, Germany, to negotiate the rulebook on Paris. The team had directions to work constructively.