Tillerson is fixing Trump’s tweet on the Middle East 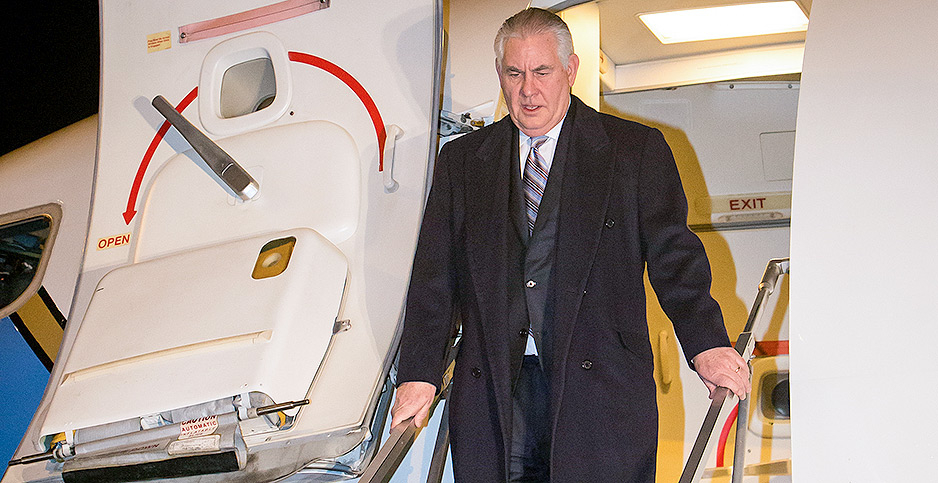 President Trump held up former Exxon Mobil Corp. CEO Rex Tillerson’s international business background as a more-than-adequate substitute for diplomatic experience when he tapped him for secretary of State.

But the former oil boss’s global perspective has put Tillerson at odds with a president who praises nationalism.

From the Paris Agreement to possible military options for North Korea, the chief diplomat has taken a more cautious tone than Trump. That puts Tillerson in line with established U.S. foreign policy positions and market concerns. Energy and climate are among them.

To some, Tillerson seems like the "adult in the room."

"He’s not a rash kind of guy," said Tyson Slocum, energy director for Public Citizen, which opposed Tillerson’s nomination. "His definition of national interest would be different from ours, but he doesn’t seem to be interested in burning the whole house down or blowing everything up and see what rises from the ashes. He understands that there are huge problems with that kind of disruption."

The standoff that erupted in early June between Qatar and four other Arab countries illuminates the differences between Trump and Tillerson. Saudi Arabia, the United Arab Emirates, Bahrain and Egypt launched a boycott of Qatar, a small but resource-rich nation that they alleged is funding terrorism. Saudi Arabia and the other countries demanded that Qatar shutter the news outlet Al-Jazeera and make other concessions.

Qatar denies it backs terrorist groups. The dispute was seen as a bubbling-up of old tensions over the regional balance of power that has simmered since the 1990s, when Sheikh Hamad bin Khalifa al-Thani set about to raise Qatar’s profile in part through a boom in natural gas extraction and export.

Trump notably backed Saudi Arabia and its allies in their bid to isolate Qatar, which hosts the largest contingent of U.S. military personnel in the Middle East, at its Al Udeid Air Base.

Trump also seemed to take credit for the pressure being exerted on Qatar.

"So good to see the Saudi Arabia visit with the King and 50 countries already paying off," Trump tweeted in June, referring to his visit to Riyadh weeks earlier. "They said they would take a hard line on funding extremism, and all reference was pointing to Qatar. Perhaps this will be the beginning of the end to the horror of terrorism!"

He later told reporters that "the nation of Qatar unfortunately has historically been a funder of terrorism at a very high level."

Tillerson, who had personal experience working with Saudi Arabia and Qatar while at the helm of Exxon, took a radically different tack. On a trip to the region the following month, he sought to smooth feathers, calling all of the countries involved "really important to us from a national security standpoint." He also said Qatar’s resistance to the Saudi position was "very reasonable."

His evenhandedness was lauded by many in the foreign policy arena. Qatar is, after all, a U.S. ally that has welcomed U.S. commercial investment.

Exxon also has an outsized stake in Qatar, having built most of the country’s liquefied natural gas (LNG) infrastructure under Tillerson. It retains a 30 percent ownership in those assets, and Qatar exports more LNG than any other country in the world. Observers attribute Tillerson’s position to his understanding of how global markets work, rather than a direct mercantile interest in Exxon.

"Given his experience, he would have a deep understanding of the role that Qatar’s LNG plays in the global natural gas markets, both geopolitically and commercially," said Amy Myers Jaffe, executive director for energy and sustainability at the University of California, Davis. "And how important it is for some U.S. allies."

This year’s standoff has had next to no impact on the flow of gas from the country. Even the UAE is still receiving it via pipeline despite being on the opposite side of the dispute. Ira Joseph, head of gas and power at S&P Global Platts, said, "What goes on diplomatically and what goes on commercially in the Middle East are two very different worlds."

Closing the spigot on Qatari gas would severely impact Japan and South Korea, both of which receive approximately 15 billion cubic meters of gas from the country every year. Japan’s gas dependence has grown as it moves away from nuclear power in the wake of the Fukushima Daiichi disaster in 2011. India and the United Kingdom are also major recipients.

But the political alignment between the U.S. and Qatar is different under Trump than in the Obama years. Experts say Trump’s friendly visit to Riyadh showed a reorientation back toward reliance on Saudi Arabia as an ally.

And Qatar’s cooperative relationship with Iran, a neighbor with which it shares a major gas field, may also make it suspect in the eyes of the Trump administration. Tillerson supports a 2015 nuclear deal with Iran that Trump promised to withdraw from during last year’s campaign. The secretary of State appears to have persuaded Trump to put off that campaign pledge, though Trump has predicted Iran will be judged noncompliant with the deal’s terms, and sanctions could be reimposed.

Frank Verrastro of the Center for Strategic and International Studies said Trump’s visit may have convinced Saudi Arabia and its allies that the new administration would back them. Trump’s tweets seemed to confirm that.

But isolating Qatar from the rest of the Gulf Cooperation Council may have the effect of edging it closer to Iran — an outcome that Tillerson would know to be harmful to U.S. interests.

"We don’t need the conflict to escalate here, and we don’t need the Qataris and the Iranians to be on one side and the rest of the countries to be on the other side," Verrastro said. "And then, by the way, there are the LNG issues and the energy logistics issues.

"I just think he understood the complexity of it," he said of Tillerson.

Trump, on the other hand, emerged from his May visit having secured an agreement to sell Saudi Arabia more than $100 billion in weaponry, while finding common cause on containing Iran.

This was the most concrete achievement during Trump’s first foreign trip, which also included clashes with European allies over NATO defense spending and disputes on climate change and trade at the Group of Seven summit in Italy. The president’s pro-Saudi tweets may show an eagerness to protect that win, Verrastro said.

The president might also see Qatar as a U.S. competitor in the global LNG market. At the start of the standoff in June, the UAE did import some U.S. LNG to compensate for lost Qatari product. And Trump has made statements that suggest he thinks U.S. producers can gain a large share of the global gas market more rapidly than most experts say is feasible.

"I don’t think he fully appreciates the investment and the timeline and the commercial, contractual relationships that are already in place," said Verrastro. Tillerson, on the other hand, is probably aware of those complexities.

Meanwhile, the dispute continues. Qatar and Saudi Arabia have launched advertising campaigns in the United States meant to persuade U.S. officials to support their positions. The Saudi American Public Relation Affairs Committee had spent $140,000 on that campaign by late July.

Qatar has used the last two months to strike commercial deals that also double as acts of defiance against the boycott. It has bought fighter jets from the United States and warships from Italy. It also recruited a soccer player named Neymar da Silva Santos Jr. for its Qatari-owned Paris Saint-Germain Football Club.

Richard Sawaya, vice president of the National Foreign Trade Council, said Tillerson’s effort to preserve relationships with GCC countries is shared by other members of Trump’s national security team. Defense Secretary James Mattis and national security adviser H.R. McMaster "are equally well-schooled in the map that we’re talking about and the lines that are on it," he said.

"There’s a family feud going on, and we’re not in the family," Sawaya said, referring to the Middle East. "The challenge for U.S. policymakers is how do you manage your response to the family feud, given your interest?"

The answer, he said: "Don’t take sides. Try to resolve the feud. That used to be called diplomacy."

There’s some evidence that Tillerson may be feeling the strain of serving in Trump’s Cabinet. There were reports late last month that he told friends he may be making an exit. But the secretary of State has become personally involved in a forthcoming reorganization of the department, which is already in progress, and insiders say he’s unlikely to depart until next year at the earliest.