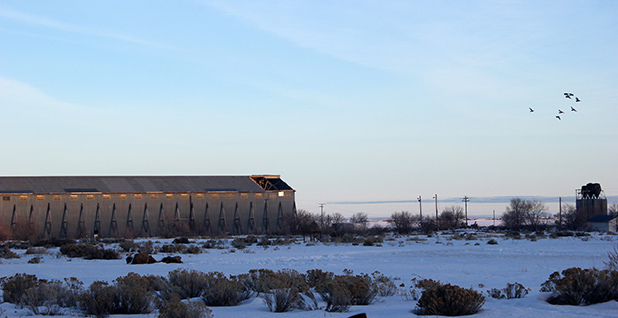 The hulking mill at one time employed about a fourth of the county’s workforce with high-paying union salaries, but it shut down in 1995 after the Forest Service banned the cutting of old-growth ponderosa pine.

Its demise offers fodder for Ammon Bundy’s claims of federal overreach as he leads an armed occupation of the Malheur National Wildlife Refuge into its fourth week.

While Bundy has mainly courted frustrated ranchers, he’s recently broadened his pitch to the timber industry. He said last week that federal forests in Harney have up to a decade’s worth of downed timber that could resuscitate the mill and get loggers back in the woods — if only the federal government would loosen its grip on the lands.

In Harney, a county of 7,000 that is about three-fourths federal lands, local sentiment weighs heavily against environmental regulation.

Yet few here believe Harney will ever see a return to the logging levels of old. And despite Bundy’s promise, almost no one holds hopes of reopening the mill.

"Obviously, there are opportunities to move the pendulum back our way," said Jim Geisinger, executive vice president of Associated Oregon Loggers. "But I don’t think it will be at that mill."

Historical records suggest federal environmental laws are only partly to blame for killing Harney’s timber industry. The Hines mill started suffering in the 1980s as a result of stiffer competition, inefficient operations, automation and labor strife.

The derelict mill south of town on U.S. Highway 20 is a rusted shell stripped of its machinery, and was never designed to process the small-diameter trees the Forest Service sells these days.

"The Hines mill operated in the mid-20th century cutting huge, old-growth ponderosa pine trees, the likes of which we won’t see again for a hundred or more years, if ever," said Andy Stahl, executive director of Forest Service Employees for Environmental Ethics. "Once these valuable trees were gone, the dry and arid land, located far from major markets, proved unable to compete with southeastern U.S. and other more highly productive lumber producers."

Yet to many area residents, the mill remains a symbol of how federal environmental rules have squeezed the livelihoods of ranchers, miners and loggers. It’s a potent symbol for firebrands like Bundy who are pushing for roughly 640 million acres of federal lands to be transferred to local control, unfettered by laws like the Endangered Species Act and National Environmental Policy Act.

"I don’t agree with what’s been going on with our government, the way they take care of our lands," said Louis Smith of Crane, Ore., at a community forum in Burns earlier this month. "I worked in the timber industry here. I complained about when they had to take it away from us."

According to Oregon’s Office of Economic Analysis, employment in Harney has been essentially flat for the past 40 years, even as Oregon’s employment has risen by 74 percent.

Statewide, nearly two-thirds of wood products employment has vanished since the 1970s. Yet Harney’s losses have been "significantly larger," the office said.

"That takes the industry’s share from more than 3 out of every 10 jobs back in the late 1970s to zero percent today," the office said in a briefing.

It’s one reason that many residents here sympathize with Bundy’s anti-federal message, even if most disagree with the occupation.

The first log rolled through the Hines mill in late January 1930, kicking off decades of prosperity.

A headline in the Jan. 31, 1963, paper read: "1962 Sees Hines Breaking Record." The plant had churned out 134 million board feet of lumber, employment had doubled since it had opened and payroll had risen fivefold.

But hard times hit in 1980 when a Prineville sawmill outbid Hines for $6 million in timber from the Ochoco National Forest, marking what the Portland Oregonian described as "the latest in a succession of blows to Burns, one of the state’s hardest hit areas in the current recession."

Mill employment was slashed to around 150, down from almost 1,000. Unemployment in Burns spiked above 25 percent, higher than anywhere in the state.

Among those laid off was Bob Wark, who was pictured in one newspaper with a rifle in hand looking to shoot an elk. "We need the meat for winter — and to cut down our food bills," he said, according to the news clip.

Plans to partially reopen the mill were shelved due to "poor market conditions," the Oregonian reported in 1980. In a letter to employees, the mill said it could not compete "unless we manage to operate much more efficiently than we have in the past." Company officials asked the union to approve a three-year pay freeze.

The mill was purchased in 1983 and put back into operation as Snow Mountain Pine Co., but its resurgence was cut short by labor strikes in 1988.

"The injunctions, the appeals and the implementation of ‘screens’ on timber sales nearly brought logging to a halt this past year," the Times-Herald reported. "And a sawmill can not operate without logs."

Don Graves, a Snow Mountain official, was quoted as saying: "The local Forest Service personnel have been sympathetic and helpful, but the federal government’s policies are extremely restrictive."

In a sign of local frustrations — and perhaps a harbinger of today’s refuge occupation — residents pushed to put federal lands under local control and to recall two of Harney’s top elected officials, the Bend Bulletin reported in 1995.

For example, the Malheur in 1989 had predicted it would sell 135 million board feet of timber annually for a decade. But by 1994, sales fell to 33.1 million board feet, with only 18 million going to saw timber, the Bulletin said.

Who is to blame?

Bob Ragon, who was assistant manager at Hines in the mid-1970s and is now executive director at Douglas Timber Operators in western Oregon, said the Hines mill suffered the same supply crunch as other Oregon mills that depended on federal forests.

Hines got 95 percent of its timber from the Ochoco and Malheur, he said.

He blames environmentalists, who, after halting the clearcutting of western Oregon forests to save the northern spotted owl, focused their attention on halting the harvest of large-diameter trees in eastern Oregon.

Jim Lyons, who served as President Clinton’s top forestry official and is now a top aide to Interior Secretary Sally Jewell, in the mid-’90s pushed to "screen" all east-side timber sales for impacts to old growth, wildlife and rivers. Trees greater than 21 inches in diameter were generally placed off limits.

But the Hines mill’s struggles began far before the supply crunch, said Stahl of Forest Service Employees for Environmental Ethics.

Annual timber sales in the 1980s were, on average, 50 million board feet more than in the previous four years, he said.

"Anyone who thinks the Hines mill closure had anything to do with declining Forest Service timber sale amounts needs to have their head examined," he said.

Once the old-growth trees were gone, the Hines mill could not adapt, he added.

"The same thing happened to hundreds of lumber manufacturers throughout the interior Rocky Mountain West," Stahl said. "They mined the old growth, shut the mills and moved their capital to faster-growing tree plantations elsewhere."

Even without the environmental restrictions, modern technology still would have killed many timber jobs, the Oregon economic office said.

"The automation and mechanization in the logging process and in the mills, by itself, would and has resulted in a large employment decline," it said.