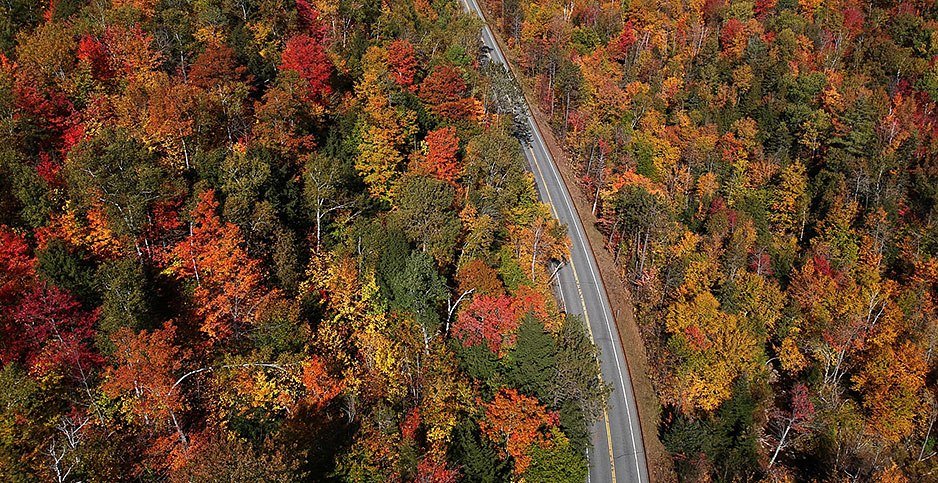 Some environmentalists are concerned parts of the Adirondacks in upstate New York are being harvested at unsustainable rates. Hazal Ozturk/@h_ozturk/Unsplash.com

WARRENSBURG, N.Y. — For all the fights about clearcutting old-growth forests in Alaska and Oregon, some of the most lasting scars from aggressive logging can be found just a few hours’ drive from New York City.

Here in the Adirondack Mountains, the timber industry’s exploitive past is shaping a modern-day argument over how best to manage parts of the forest — and fueling a larger debate about what happens when investment companies with far-removed owners take over vast stretches of wilderness.

The latest dust-up is over Lyme Timber Co.’s push to clearcut parcels of a few hundred acres at a time — a technique that the company says will help rehabilitate sections of the forest that the previous owner, International Paper Co., allowed to decline by selectively harvesting trees for pulp while allowing lower-value trees such as beech to proliferate.

Clearcuts will now pave the way for young-growth harvests in the coming years and help create forests that sequester more carbon, Lyme says. Other forest investors in the region have taken an interest too, according to the Empire State Forest Products Association, an industry group.

The unfolding trend alarms environmental groups that argue sections of the Adirondacks are being harvested at unsustainable rates. They’ve urged the state to do more to monitor the impacts. As much as 4,000 acres may have been clearcut during the past six years, according to the nonprofit group Protect the Adirondacks.

"Looking at them one at a time, they seemed reasonable to us," said John Sheehan, communications director for the Adirondack Council, the area’s biggest environmental group, which didn’t oppose Lyme’s clearcut applications to the state. But the cumulative effects are a mystery, he said. "We don’t know what that’s doing."

Lyme, a timber investment management organization based in Hanover, N.H., owns about 240,000 acres in the Adirondacks. It accounts for the majority of about two dozen clearcut applications the Adirondack Park Agency has received during the past few years. The APA’s approval is necessary for any clearcut bigger than 25 acres, and some groups are pushing to reduce the threshold to 5 acres.

The APA has adjusted its definition of clearcuts over time and believes allowing larger clearcuts through applications is better than the alternative — forest owners making multiple clearcuts of 24 acres, for instance, to avoid the agency’s threshold for permits, the agency told E&E News.

"I don’t blame them, because it’s different," Ross said, adding that he knows all about the region’s troubled history with overcutting. "That was one of the reasons I treaded lightly."

The Adirondacks constitute the nation’s biggest park outside Alaska. Protected as "forever wild" by the New York Constitution, the park has become so popular during the COVID-19 pandemic that officials are considering restrictions on hiking.

By the time the park was established in 1892, much of the forest had been cut over — early on as a way to help the government pay Revolutionary War debts, and later to supply raw material for the lumber, tanning and paper industries. By the mid-1800s, more softwood lumber was shipped through the port of Albany than anywhere else in the country, according to the New York State Forest Owners Association.

The topographical engineer and writer Verplanck Colvin described the damage in 1874 in a survey that called for creation of a forest preserve.

"Unless the region be preserved essentially in its present wilderness condition, the ruthless burning and destruction of the forest will slowly, year after year, creep onward," Colvin said at the time, "and vast areas of naked rock, arid sand and gravel will alone remain to receive the bounty of the clouds, unable to retain it."

Despite the historical challenges, the timber industry endures with a mix of small, family-owned mills such as Lake George Forest Products in Warrensburg and Tupper Lake Hardwoods in Tupper Lake, a town that once set a world record for sawing more than a million board feet of lumber in a day. About 20,000 people in the state work in wood products and wood furniture, plus about 16,000 in pulp and paper, according to the New York Wood Products Development Council.

"The jobs from those mills are really what we don’t want to see disappear," said Charles Canham, a forest ecologist at the Cary Institute of Ecosystem Studies in Millbrook, N.Y., who added that he worries about the long-term sustainability of industrial forest management.

But the biggest players are companies like Lyme, with nearly a quarter of a million acres, and Molpus Woodlands Group, a Mississippi company that holds 240,000 acres.

"We’re producing a lot of forest and wood products," said John Bartow, executive director of the Empire State Forest Products Association, with more than 400 members. In addition to paper, the region produces flooring, veneer and cabinet wood, he said.

Overall, New York’s nearly 19 million acres of forest is regenerating at least three times faster than it’s being harvested or lost to insects and disease, according to the forest products group.

But that measure has narrowed to 2-to-1 in the eastern Adirondacks, according to the state Department of Environmental Conservation, and it’s nearly 1-to-1 in some areas, said Canham.

"Actively managed forests in the Adirondacks are being harvested so heavily that they’re not contributing to carbon sequestration," he noted.

Industry groups and researchers are trying to collect more reliable data on Adirondack forest removals and regrowth with the Cary Institute’s help, Bartow said. But individual plots can throw researchers off, he added.

For example, a single event that had nothing to do with logging — a severe ice storm in 1998 that stretched from northern New York to Quebec — injured so many trees, it affects the forest inventory more than 30 years later.

In the background, an argument about forest ownership continues to simmer and will shape the Adirondacks for generations.

Critics of investor-driven ownership say the companies are driven mainly by profit rather than stewardship. Many timber investment management groups have expectations of a 5% or 7% annual return on investment — a hard number to achieve in a forest that only grows 2% a year, the Adirondack Council’s Sheehan said.

Owners who can’t meet that goal have few options, he added, other than renting out property to hunting clubs or cutting the forest faster than it can grow back.

As far as Canham is concerned, the best-managed forests sometimes belong to families who aren’t so driven by profits. Family-owned lands elsewhere in the state sequester four times as much carbon to aid in climate change, he said. "The heroes are the family forest owners in other parts of New York, not the big land owners."

The investor-owners and their advocates say that analysis has the issue backward and the big companies are saving regions like the Adirondacks for future generations through conservation easements that prevent development — and that certification from sustainable forestry groups ensures the forests will outgrow the harvest.

Most small-scale family owners don’t pursue either of those, said René Germain, a professor at the State University of New York’s College of Environmental Science and Forestry, although forest ownership organizations try to promote them.

"The big concern we have statewide is family, nonindustrial forest. That’s where we see the most exploitation," said Germain, who sees more long-term danger in those areas than from clearcutting. "It’s kind of like the Wild West."